Marc Greendorfer, founder of Zachor and its kissing cousin, Stopantisemitism?

When I read that Eli Valley had been named Anti-Semite of the Week by an obscure group called StopAntiSemitism, I started to do some digging.  First, I discovered that the group barely exists.  Its website lists no board and no staff.  It does find itself often mentioned alongside another group called Zachor Legal Institute, which was founded by a lawyer, Marc Greendorfer.  Greendorfer’s claim to infamy is that he threatened the Highland Park public library with a lawsuit, claiming it supported terrorism because it offered a reading of the book, P is for Palestine, by children’s book author, Goldbarg Bashi.

StopAntiSemitism timed its “award” to Valley alongside the launch of its first anti-Semitism report. It’s a sight to behold, full of transparent lies, exaggerations and distortions on virtually every page, even every sentence.  It’s what we’ve become used to from the mouths of these Jewish bigots going all the way back to Meir Kahane.  These are his latter-day disciples.  Just as Donald Trump has normalized white supremacist and the violence it unleashes, Bibi Netanyahu and his far-right Likud have normalized Kahanism in both Israel and America. 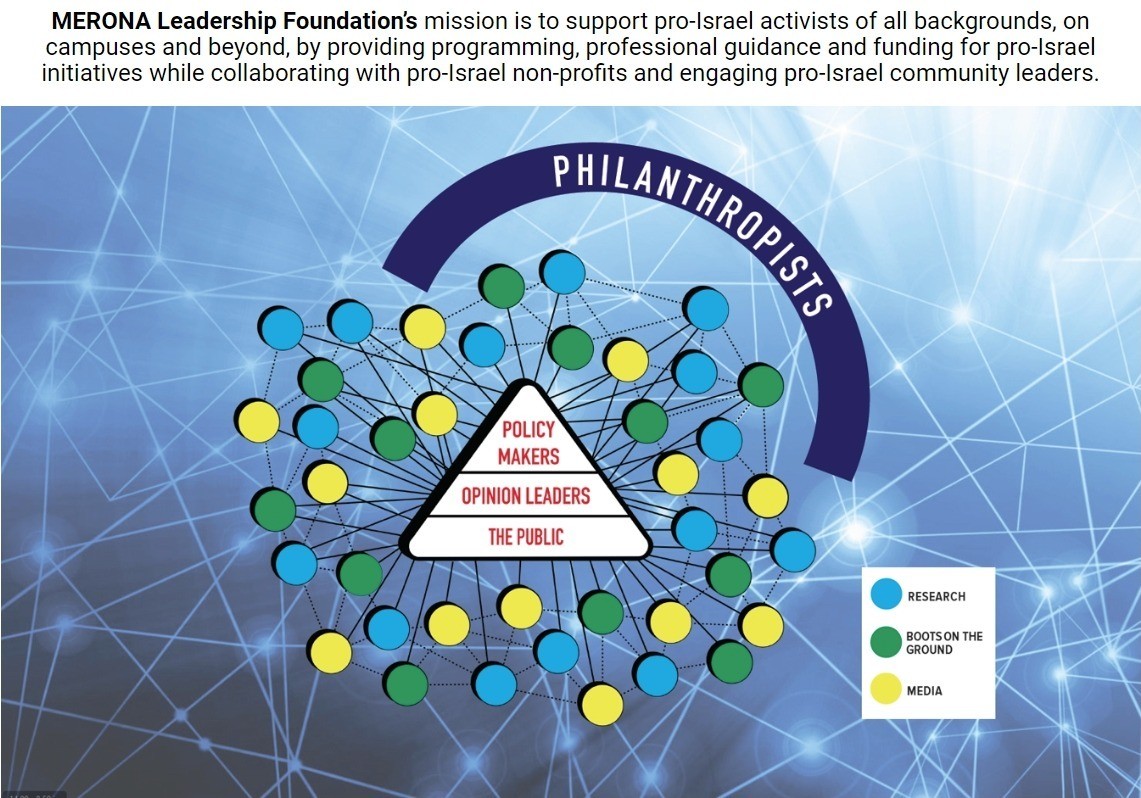 Doing further digging, I discovered that Zachor and StopAntiSemitism are closely tied to a much broader far-right philanthropic project, the Merona Leadership Foundation, founded by Adam Milstein and other prominent Los Angeles pro-Israel anti-jihadists like Steve Emerson.  Milstein’s wife, Gila, is president of the board.  Another board member is Dan Schnur, a long-time California GOP political consultant.

MERONA is a charity ‘force multiplier’ for Islamophobic Judeo-supremacist groups. It funds a Murderers’ Row of 25 far-right groups all dedicated to a Judeo-fascist Israel including:

Its last IRS 990 (2017) indicates it donated $300K to these groups. But many groups above are not listed in that 990. So it’s likely raising much larger sums since then if it’s donating to all of the above.

Curiously, it does not list Canary Mission, of which Adam Milstein is a major donor.

It seems to be a New Israel Fund in reverse. Designed to fuel the worst hate and intolerance American Jewry can offer to support a fascist, Israeli Judeo-theocracy.

I remember the 1930’s and it looks as though they are repeated; the great irony is that this time the movement is again based on racists ideas fostered by descendants of people who suffered badly under the previous rise of these ideas.

For what it’s worth, Milstein denies being a Canary Mission supporter. If you believe his denial, I have a bridge connecting Brooklyn with lower Manhattan to sell you.