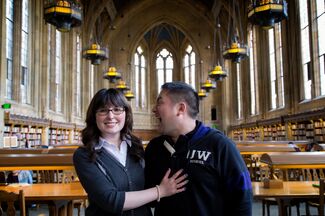 I’ve reported over the past week about the suspected alt-right shooter, Marc Hokoana, who critically injured UW staff member and antifa activist, Josh Dukes.  Later in the week I discovered that Hokoana is a current UW student.  The Office of Student Life has so far refused to respond to my request to clarify his student status and whether he has access to campus.

Local antifa activist, Baruch Zeichner managed to get a statement from the King County prosecutor saying that the Hokoana case is “under active investigation,” but that it has not yet been referred by the UW police.  In the meantime, no one else is reporting about this.  The media has offered no substantive information about Hokoana.  The University is maintaining radio silence.

All this is bad for the public.  It has a right to know if there is a violent individual in its midst.  It has the right to feel safe and know that the authorities are doing what is necessary to contain his access to guns and them.

I have contacted several of Hokoana’s Timberline High School alum acquaintances.  Though they have spoken on social media about him, none has been willing to speak with me about him.

Photographer Daniel Berman, who took a critically important photograph of him at an Olympia Guns Across America rally, refused me permission to use his image.  He claimed oddly that my article reporting Hokoana was a suspect was “libelous.”  Then he claimed my “gun-nut friends” would target him (Berman) because he took the picture.  Berman even claims to be refusing the Seattle Times and Crosscut access to the image.  Which means that a photographer who documented a crucial, incriminating aspect of a criminal suspect’s past is refusing to permit the public to see the image.

A photographer traveled to a wing-nut rally thinking it would make a good photographic subject.  Without realizing it, he shot a photograph of an individual who would later be suspected of a serious weapons crime.  Apparently, he believed he was photographing a toy show and not a gun rally.  And that his photographic subjects were innocent urchins instead of gun-nuts and potential sociopaths.  Because as soon as he realized what he’d done he decided, he permitted no one else to use the photograph in a way that would link it to his suspected crime.  Thus denying the public critical information related to high-profile crime at a major northwest educational institution.  A reason for his reticence may be found in a tweet he published claiming he’d “love” to photograph Donald Trump.  He certainly has a hankering to record Trump rallies and praise their “energy.”

There is entirely too much fear and silence around this case.  Because of this, I’m launching a hashtag #whoisMarcHokoana to provoke curiosity among the public about both the suspect and this case.  I also hope it will pressure the media, police, prosecutor and university to be more transparent and pro-active in pursuing the matter.

Last Friday’s shooting was not an isolated incident.  Seattle Weekly reports that UW graduate student Alan-Michael Weatherford was doxxed by an anti-gay 4chan group after Weatherford participated in a protest against Trump administration policy on immigration and refugees.  He tussled with someone on campus who shot video of undocumented immigrants without their permission and then uploaded it to YouTube.  They also made public personal information including his teaching schedule and other normally private matters.  The result was a torrent of abuse in the form of comments advocating sexual torture, rape, etc.:

They have spammed my UW email account with listserve confirmations; they know where my office is in addition to my office hours; and I have started to receive packages to my departmental mailbox, some of which hinted to include Pepe the frog figurines (an image often sent to victims of online harassment). A list of various professors’ emails from my own department — especially my chair’s — were slated to send in “honest letters by the community,” asking for my removal as an instructor. There is even a post that is attempting to find the bus that I ride in order to further harass me. And, I later learned that night that they know my biological mother’s personal information.

It’s unsurprising the University, including the police, offered him very little practical or moral support in his predicament.

Meanwhile, there was a large protest at Milo Yiannopolous’ University of New Mexico appearance.  Police on horseback assaulted the demonstrators and threatened to use “chemical munitions” against them.  One officer even pointed a bean bag shotgun at them.  One of the protesters held a banner saying: “Avenge Seattle!”