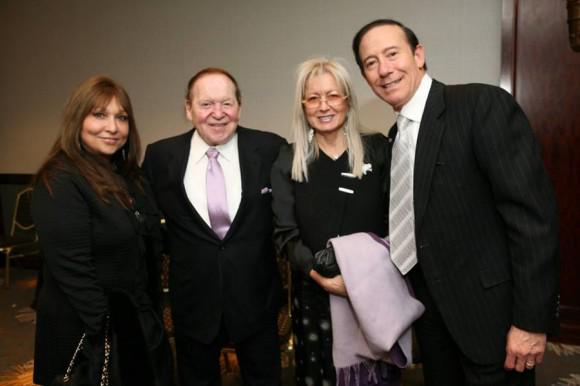 A lot of ink has been spilled covering the misdeeds of Adam Milstein (aka Tuvia Milsztein), the convicted felon, millionaire Los Angeles real estate developer and donor to far-right Israel advocacy.  He was born and raised in Israel, graduated from the Technion in 1978 and arrived in America in 1981.  He founded a real estate partnership, Hager Pacific Properties, which manages millions of square-feet of commercial real estate throughout the U.S.  His net worth is around $147-million and he lives with his wife, Gila in a sumptuous home in the wealthy Los Angeles suburb of Encino.  They manage a family foundation with $15-million in assets which distributes about $1.5-million mostly to pro-Israel causes (see below) each year.

Unfortunately for him, Milstein has a habit of cutting corners in his charitable and political endeavors.  Most recently, in UCLA student government elections he solicited thousands of dollars in campaign donations to pro-Israel candidates.  Not only is it unusual for outsiders to fund campus elections, the manner in which Milstein did this is even more disturbing.  He donated $50,000 to the UCLA Hillel, entitling him to a tax-deduction, at the same time instructing $1,000 of it to be “passed-through” to the “Bruins for Israel” political campaign.  Though Hillel denied it supported the election campaign, the candidate himself wrote a letter thanking Milstein for his donation; and Milstein wrote e-mails asking friends to follow his example and designate Hillel gifts for the election.

I’m personally offended by this because when I attended UCLA doing an MA in Comparative Literature, Rabbi Chaim Seidler-Feller was someone I looked up to as campus Hillel director.  He was a liberal man, open and tolerant.  In fact, after Chaim was sued by Rachel Neuwirth, I defended him here and earned Neuwirth’s enmity for it.  She even sued me and it took seven years before she finally exhausted all her legal options and lost.  But Chaim allowed Hillel to be abused in this case.  In fact, every single Hillel the Forward approached inquiring whether they would engage in a similar transaction, said flat-out, No.  Not Chaim.  He went for it.  When the Forward asked him for comment before publication, he remained silent.  After the Forward published, Chaim complained to the publisher.  But there was nothing to complain about.  The coverage was spot-on.  It was Chaim’s behavior that wasn’t.

While I don’t pretend to be a tax lawyer, I would think the IRS would look askance at non-profit organizations like Hillel using tax-deductible donations to fund political campaigns.  If it allowed it, what’s to stop Sheldon Adelson from finding a willing non-profit into which he could pour $150-million and then pass it to the GOP for the 2018 presidential race.  The gambling tycoon would thus play a critical role in determining the next president while getting $150-million in tax-deductions.  That would be quite a feat!

Abe Greenhouse uncovered a bit of Milstein’s sordid past at Electronic Intifada.  Despite his great wealth, he hankered to keep as much of it as possible out of the hands of Uncle Sam.  A decade ago, a Rumanian Hasidic sect, the Spinka, employed a nifty tax-evasion fraud which many wealthy Jews availed themselves of.  In 2006 alone, Spinka accepted $8.5-million in “donations,” which it returned to the donors after skimming a 7% “fee” off the top.  While the scheme is patently illegal, it performed useful tasks for both parties.  The Spinka received an infusion of cash which they used to maintain their community.  And donors got a tax-deduction for money which was largely returned to them.

Milstein liked the idea so much that he put $170,000 of his own money into it.  He was caught, convicted and spent three months in federal prison, which makes him a convicted felon.  Among those who wrote letters begging for leniency from the judge were the usual suspects in the pro-Israel community.  But a former Israel counsel general in Los Angeles also wrote on official government stationery telling the judge the services Milstein had performed for his homeland.

There is a distinct similarity between his Spinka and UCLA Hillel donations.  In each case, there was subterfuge involved.  In the case of Spinka, Milstein sought to get something for nothing.  In the UCLA Hillel case, he sought to disguise his political donation while getting a tax deduction for his efforts.  Also, in both cases the pro-Israel donor took a tax-deduction he didn’t deserve.  We know for certain his actions in the Spinka case were a felony.  Unfortunately, no one has yet held him accountable for his manipulation of IRS regulations in the Hillel case.  The FBI shouldn’t take kindly to convicted felons who continue their fraudulent ways after serving a prison sentence.

The Israeli developer is a key political-charitable operative in the pro-Israel movement.  His family foundation has given millions to a roster of “A-list” right-wing nationalist charities, but his two largest gifts are to StandWithUs and Aipac’s American Israel Education Foundation.  His 2013 IRS 990 form lists these gifts to right-wing organizations:

Milstein was a founder and current board member of the Israeli American Council, a pro-Israel lobby for Israel-emigrants who seek to infuse American life with a patriotic fervor for Israel.  The group’s annual fundraiser last night raised an unprecedented $23-million, which will be used to add political muscle to their message.  They appear to seek to be the Israeli-emigrant equivalent to Aipac.

Hamas Terrorist hangs & position kids on a fence in front of a house to ensure the #IDF will not strike the building pic.twitter.com/VvC6osScPG

But what really brought me to write this post was an atrocious act of pro-Israel propaganda, indeed what I call Zio-porn.  It’s this picture, which I find so objectionable and horrific that the only reason I’m displaying it is because I want those who surf the web to find both this picture and this post so they will know far more about the real truth behind it than Milstein offered when he pimped it last summer.

On July 31st, at the height of Operation Protective Edge, he posted this image to Twitter saying it featured a “Hamas terrorist” using children as human shields to protect a residential building from Israel attack.  Anyone familiar with the ways of the hasbara apparatus would smell a rat as soon as they saw this picture and Milstein’s caption.

Indeed, both Wild Flowers (first) and Little Green Footballs (a day later) had punctured the fraud within a day of its posting to social media.  They noted that the earliest publication of the photo they could find was in June, 2011 when it was posted by a Palestinian Facebook account.  There is little information offered about the origin or original meaning of the image there.  In fact, we don’t know where the photo was taken, when it was taken, who it pictures, or what the context of it is.  We only know a Palestinian posted it to Facebook.  I’ve sent a message to him asking about this, but he hasn’t responded.

There you have it: an ex-felon who continues to skate just this side of the law in his pro-Israel political involvements at UCLA.  One who crudely smears Palestinians and Muslims.  Milstein’s actions in this particular case also coincide with a large cross-section of the pro-Israel charities he funds, which lie through their teeth on a regular basis to advance what they perceive as Israel’s interests.

Comments are published at the sole discretion of the owner.
Subscribe
6 Comments
Oldest
Newest Most Voted
Inline Feedbacks
View all comments

“They noted that the earliest publication of the photo they could find was in June, 2011 when it was posted by a Palestinian Facebook account.”

The new Hillel rabbi taking over for Chaim is definitely right-wing. He calls BDS “anti-Semitic.” And Hillel has a large group of pro-Israel activists involved in it. When I attended UCLA in the late 1970s it was totally different.

Richard, so by your standards UCLA Hillel is now right wing because the new Rabbi thinks the BDS movement is anti-Semitic and “Hillel has a large group of pro-Israel activists involved in it.” So you define as “right-wing” anyone who is pro-Israel. My, my.
Thank G-d for people like the wonderful philanthropist Adam Milstein. He palys a vital role in the survival of Israel. You on the other hand play a vital role as a usefull idiot for the BDS movement led by vicious anti-Semites. Your hit-peice on Adam is a hit piece on all of us who understand the reality of the world we live in. You give the cover necessary to all the terroists who do their very best to annihilate Israel and destroy Jews everywhere.
You are needed in the field of your chosing, comparative literature. Please leave the real world to the adults.

@ Dig Deeper Doug: Look at my comment rules for my discussion of the term “pro-Israel.” In common Jewish communal parlance, “pro-Israel” means stridently nationalist, Likudist. That doesn’t mean that these people are really pro-Israel in the sense of their views being in Israel’s best interests. BTW, I don’t see how having a convicted felon run Hasbara Central for U.S. campuses is “pro-Israel.”

God is disgusted with Adam Millstein. God doesn’t want his Jews to cheat the government and engage in unethical, greedy behavior. Adam Milstein plays a vital role in embarrassing Israel and turning the world against it. You’re his faithful mini-Me.

Since you haven’t bothered to read the comment rules as you are directed to do before you publish here for the first time, I’ll notify you that insulting me by calling me a “useful idiot” is grounds for termination. You have been exterminated with extreme Zio-prejudice.

Thanks for visiting Tikun Olam. It breaks exclusive stories on Israel-Palestine often not yet published in Israeli or foreign media. Please subscribe to new posts–and tell all your friends!

Also, support my unique work with a tax-deductible donation to Media Alliance, my fiscal sponsor.