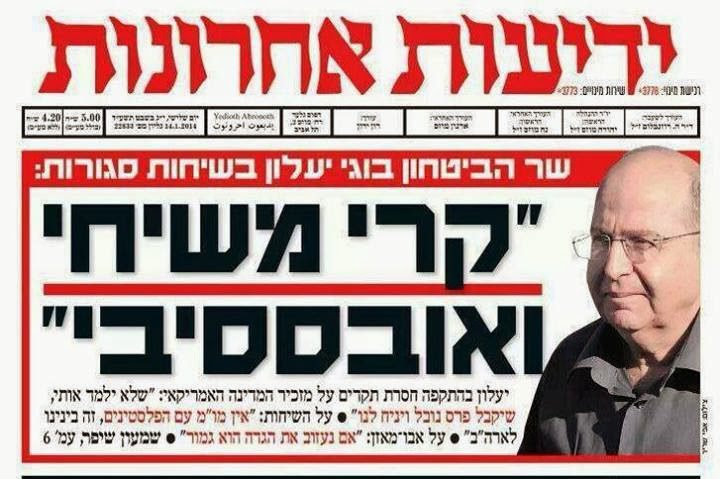 Israel’s defense minister, Bogie Yaalon issued a fiery fusillade aimed at John Kerry and his intensive round of Israeli-Palestinian peace talks.  Yaalon declared that the secretary of state was animated by a “messianic obsession” for peace that not only wasn’t shared by Israelis, but shouldn’t be:

Abu Mazen is alive and well thanks to us,” Ya’alon said. “The moment we leave Judea and Samaria he is finished. In reality, there have been no negotiations between us and the Palestinians for all these months – but rather between us and the Americans. The only thing that can ‘save us’ is for John Kerry to win a Nobel Prize and leave us in peace.”

“I live and breathe the conflict with the Palestinians; I know what they think, what they want and what they are really planning,” he said.

“Secretary of State John Kerry — who arrived here determined, and who operates from an incomprehensible obsession and a sense of messianism — can’t teach me anything about the conflict with the Palestinians.”

“The only thing that might save us is if John Kerry wins the Nobel Prize and leaves us be,” he added.

“The American security plan presented to us is not worth the paper it’s written on,” Ya’alon said. “It contains no peace and no security. Only our continued presence in Judea and Samaria and the River Jordan will endure that Ben-Gurion Airport and Netanya don’t become targets for rockets from every direction.”

The first thing that must be said here is that if anything, it is Yaalon who operates out of a messianic obsession.  I’ve documented here that Yaalon toured Australia with Moshe Feiglin under the auspices of the settler movement.  Indeed, Meir Kahane’s grandson made the arrangements for them.  When he was IDF chief of staff, his commander in chief, Prime Minister Sharon told him to assist in the withdrawal from Gaza.  Yaalon refused.  Sharon sacked him.

Not to mention that I’ve documented Yaalon’s outright lies both about Iran and the Palestinians.  This man couldn’t tell the truth about anything concerning Arabs if his life depended on it.

But the real topper is for Yaalon to claim he knows what Palestinians think, want and plan.  It’s something like the reverse of Freud’s complaint about women: “what do they want?”  At least the Viennese psychiatrist made no pretence of knowing the answer.  It’s far worse for someone like Yaalon to believe he knows when he hasn’t a clue.  In fact, I’d venture to say that every opinion he has about Arabs is wrong.  Having him as defense minister is akin to having Typhoid Mary appointed secretary of agriculture.

Returning to the peace talks, when Kerry promised the Israelis that their eastern border would be the “quietest in the world,” Yaalon exploded (Hebrew):

What are you talking about?  You’ve offered us a plan that relies on sophisticated technology, satellites, sensors, war rooms filled by banks of TV monitors without our physical presence in the field.  I ask you–how will technology respond when a Salafist or Islamic Jihad cell tries to mount a terror operation against Israeli targets?  Who will deal with them?  Which satellites will deal with the rocket factories that will set up shop in Hebron and launch their missiles at Tel Aviv and central Israel?  In Gaza, terror groups already have thousands of missiles that can hit the center of the country.  They’ve already transferred this technology and expertise to produce missiles in the West Bank.

Once again, note that neither Islamic Jihad or Salafist cells have attacked Israel from the West Bank.  Nor is there any evidence the Israeli government or its intelligence agencies have produced showing that missile production expertise has been exported from Gaza to the West Bank.  I haven’t even heard that there are missiles in the West Bank.  This is sheer bluff.

We’ve just seen the death and burial of perhaps the greatest Israeli bluffer (read, “liar“) of them all, Ariel Sharon.  Yaalon learned a few things at Sharon’s knee, it appears.

Yaalon continued with his diatribe, this time launching into his “they-must-recognize-us-as-a-Jewish-state-or-else” mode:

If there is no change [on the Palestinian side] regarding this matter, then there isn’t any purpose to the satellites or sensors the Americans propose.  The five year-old in a suicide vest will continue trying to kill us when he grows up.

The ultimate chutzpah of this bemedalled jackass may be seen in his response to being taken to the woodshed by the Obama administration, which called his comments “unacceptable.”  Yaalon, in typical Israeli macho fashion, did not apologize (don’t be fooled by any headlines you might read using this term).  What’s to apologize for, after all?  Here’s the defense ministry statement:

“The defense minister had no intention to cause any offense to the secretary, and he apologizes if the secretary was offended by words attributed to the minister.”

I do so love “apologies” which blame the victim for taking offense (“if the secretary was offended”).  You’re damn right he was offended.  Further, to claim that such a derisive smear of Kerry contained no intent to cause him offence is to take leave of one’s senses.  It would’ve been far better for him to say: strong words and emotions accompany this issue and I let my passions get the better of me.  But that would be a western mode, not an Israeli one.  Just as the joke says Italian tanks have one one gear–reverse, so Israeli psyches have only one gear–forward–and no apology mode.

Sorry for the hockey reference in the headline.  I’m not even a hockey fan, but I thought the violent imagery of the forecheck suited both Yaalon political style and Israeli politics in general.

I am not a huge fan of Yaalon, but I do not see how you can so wholeheartedly dismiss what he knows about the Palestinians and their plans.
Do you not think Abu Mazen’s survival is largely dependent on the Israeli presence in Judea ? I think it is naive to think there is absolutely no chance of Hamas taking over in such a situation. I mean, it only happened in Gaza, right ? That must be a statistical error.
I do think that the settlements do not promote peace, but the world isn’t black and white. It’s not “settlements=bad, if we just got rid of them everything would be peachy”.

It is funny to hear this openly admitted by one of the Israeli negociators, because it is what critics of the American role as ‘broker’ have claimed for years: The Palestinians are so marginalized that Israel does not even bother to negociate directly with them. They negociate with the Americans on what concessions the Palestinian side should make.

Elizabeth makes a good point. But apparently this fact makes little difference: if the USA were, as often said, Israel’s lawyer, then the USA would be negotiating NOTHING that is not acceptable to Israel. This appears not to be the case.

My question for Sec. Kerry: Why, when the Palestinians are out of the picture and the USA is [trying to] dictating terms to Israel doesn’t the USA dictate the absolute return to the green-line and other terms imagined by UNSC 242 (1967)?

And when that fails, as it will — even whatever twaddle Kerry is selling is failing, why doesn’t Kerry TERMINATE all USA involvement with “peace talks” and BEGIN international talks aimed at requiring Israel to remove all settlers, the wall, all settlements, and the siege of Gaza? That is, back away from peace-making (which is not required by international law) in favor of pushing for a lawful occupation (which does appear to be required by law — and which is, even if not required by law, easy to define and clearly acceptable to the wide world).

@pabelmont – in your world life seems to be so simple, nothing is complex, and law is some form of superior morality over any agreement.

So simple for Israel just to move back to 67 lines and dismantle everything without any guarantees, agreements, peace, etc and everything in your utopic world will be just dandy. “no more war no more bloodshed” just like that.

Well Israel tried that in Gaza, dismantled and withdrew to the 67 lines – and you guys criticised her there for unilaterally doing so without the Pelestinian’s agreement. Now you want the world to impose on Israel (and de facto also on the Palestinians) a withdrawal that would leave chaos and inevitably lead to constant conflict and bloodshed on both sides.

Slow as it may be, negotiation is the only possible path, and the pressure must be on the negotiation process and not on the partial solution of withdrawal without all the small but essential details.

I think this is just Ya’alon exercising his mouth. He is not a negotiator. The Israeli negotiator is Tzipi Livni, Justice Minister/MK, veteran high level Israeli politician, dovish, much superior character than Ya’alon or Netanyahu, has trust of Palestinians.
The Palestine chief negotiator is Saeb Erekat, also a heavyweight, negotiated the Oslo Accords. These two are working well together from all accounts. Kerry is acting only as cheerleader and facilitator; he is not, as Ya’alon implies, negotiating with anyone.

What Kerry is doing is trying to smooth the way to a final status agreement between the two parties. What that translates to, and the reason why Ya’alon exploded, is that Kerry is literally driving the Israelis to settle, removing the objections that Netanyahu throws up. He’s driving the Palestinians just as hard, they also will have to settle for less than what they want.

Nice piece, thanks Richard. I thought the hockey metaphor was perfect.

“… win a prize and let us be” begs the rather immediate question – “And who will pay for your army, Mr. Ya’alon, if we let you be? Who will provide you with planes, bombs, electronics and innumerable other shinies you so manly crave?”

Ya’alon sounds like a nutbag we had to suffer in the US called Dick Cheney. In fact they look awfully similar. Must have been separated at birth.