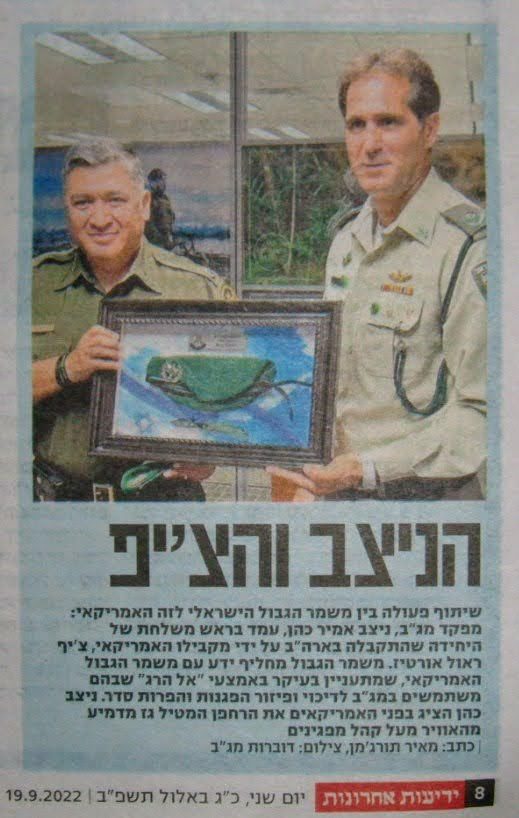 Yediot Achronot reported today that the chief of the Israeli Border Police, Maj. Gen. Amir Cohen, is being hosted by his US counterpart, Raul Ortiz, chief of the Border Patrol. The photo caption says:

The Major General and the Chip [sic]

Collaboration between the Israeli Border Police and the American [Border Patrol]:  Maj. Gen. Amir Cohen, headed a delegation his unit which was received by his US counterpart, Chief Raul “Chip” Ortiz. The Border Patrol exchanges information with the Border Police, which is particularly interested in non-lethal methods used by Border Police to suppress and disperse protests and disturbances.  Cohen presented to the Americans an Israeli drone wihch drops tear gas on protestors.

The Israeli Border Police are some of the most brutal, thuggish forces in the entire Israeli law enforcement arsenal.  They beat and kill Palestinians and use the most brutal tactics to do so. I’ve called them Israel’s version of the Brown Shirts.  Their obscene violence is so endemic that there are literally thousands of examples of it. Here is one:

They entered the hotel room one at a time and committed their despicable act, and the country roiled with shock. They ordered them to strip and beat them, one after the other, with a bamboo stick and brass knuckles, as they lay helpless and bleeding on the ground. Fourteen cases of such cruel abuse – and Israel yawned with disinterest….

At the Meitar checkpoint, the men in question were five uniformed Border Police officers who carried out their abuse in the name of the state, in the name of all Israelis, against helpless Palestinian laborers whom they hunted down in the dead of night, far from prying eyes, then assaulted and robbed of their money.

Border Police forces assaulted the funeral of murdered Palestinian journalist, Shireen Abu Akleh.  They beat mourners and almost caused her casket to fall to the ground.

One of the Border Policel’s most odious weapons is The Skunk, a vehicle which uses a powerful spray dispersed through the streets of Palestinian towns and on buildings and homes.  The smell is overpoweringly disgusting.  Not only does it drive residents off the streets, it penetrates homes and businesses and cannot be cleaned or removed.

I’ve written extensively on the agency’s brutality.  Here are some posts I’ve published going back years:

Israeli Border Police Always Get Their Man…Dead or Alive

Their supposed mission is to protect Israel’s borders which, of course, means brutalizing Palestinians both within Israel and in the Occupied Territories.  They also brutalize African refugees who reside in Israel illegally.

No US agency should have anything to do with these thugs.  They should run from it like the plague.  Yet the Border Patrol treats them like brothers.  Of course, the Border Patrol itself is riddled with brutality, killing immigrants crossing the border illegally.  Recently, the Patrol’s Twitter account ‘liked’ posts by white supremacists.

American policing is already militarized far more than it needs to be.  This was one of the central tenets of the Black Lives Matter movement.  And one of its targets was what Jewish Voice for Peace calls the Deadly Exchange of US police force delegations visiting Israel (often paid for by the ADL) to learn some of the cruel repressive methods used by Israeli police against legal protests.  If we don’t want American cops going to Israel to learn this stuff, we certainly don’t want Israeli brutalists coming here to teach ours how to be as cruel and violent as they are.

I’ve e-mailed a series of questions to the Department of Homeland Security and Customs and Border Protection press offices.  I’ve asked how the Border Police visit was arranged and who was in the Israeli delegation. What equipment besides the drones are the Israelis demonstrating?  Does the Border Patrol intend to purchase any of it?  If so, who will monitor how it is used and ensure it is not used in the brutal manner of the Border Police? They have not yet responded.

“Of course, the [United States] Border Patrol itself is riddled with brutality, killing immigrants crossing the border illegally“.

Is that a fact?

For the year 2022, during which an unprecedented number of migrants have entered the United States via Mexico, only twenty-one immigrants have died in encounters with U.S. Border Patrol.
The overwhelming majority of these deaths are due to the immigrants dying in high speed vehicle accidents, or drownings.
A few immigrants died due to medical conditions.

Where is your proof of brutality and killing immigrants?
Where is it?

Is that a fact?

Most definitely: This article calls it a “cult of brutality since 1924”: https://theintercept.com/2019/01/12/border-patrol-history/

This one about its “long history of brutality: https://www.latimes.com/opinion/story/2021-09-22/haitian-migrants-del-rio-border-patrol-horseback

This one decries a “legacy of racism: https://www.americanimmigrationcouncil.org/research/legacy-racism-within-us-border-patrol

And these are just the first few query results on the subject in Google. You could have done the same search in 20 seconds. But were either too lazy or too biased to bother.

only twenty-one immigrants have died in encounters with U.S. Border Patrol.

First, the statistics you refer to from your own source prove you are either lying, or don’t know how to read. THe graphic accompanying this quote is displayed below:

According to SBCC’s analysis, 60 of these deaths were caused by an on-duty CBP agent’s use of force including a fatal shooting, asphyxiation, a Taster, beating or a chemical agent. Another 74 deaths were due to vehicle collisions involving Border Patrol, the majority (63) of which occurred during high-speed car chases initiated by Border Patrol. In addition, 50 of the deaths were related to failure to provide adequate medical attention or medical emergencies, either while individuals were in CBP custody or directly after an encounter with agents. Fifteen deaths were homicides carried out by off-duty officers and in these cases, agents were often charged, convicted and sentenced to prison time. Twenty were due to unknown or other causes, including 4 cases of alleged suicide and 8 drownings.

Border Patrol is riddled with violence and brutality. Much like the Israeli BOrder Police. The ony difference is there is actually some federal oversight over our Border Patrol. Israel’s Border Police have, in reality, no oversight. They do what they want, how they want and know there will ultimately be no consequences.

Actually 557 migrants died in 2021, not 21. Here are the actual numbers instead the ones you invented or mischaracterized. You’d think by now, you’d recognize if you lie or slant your comments and their sources that I’d find you out and expose you. But apparently not. 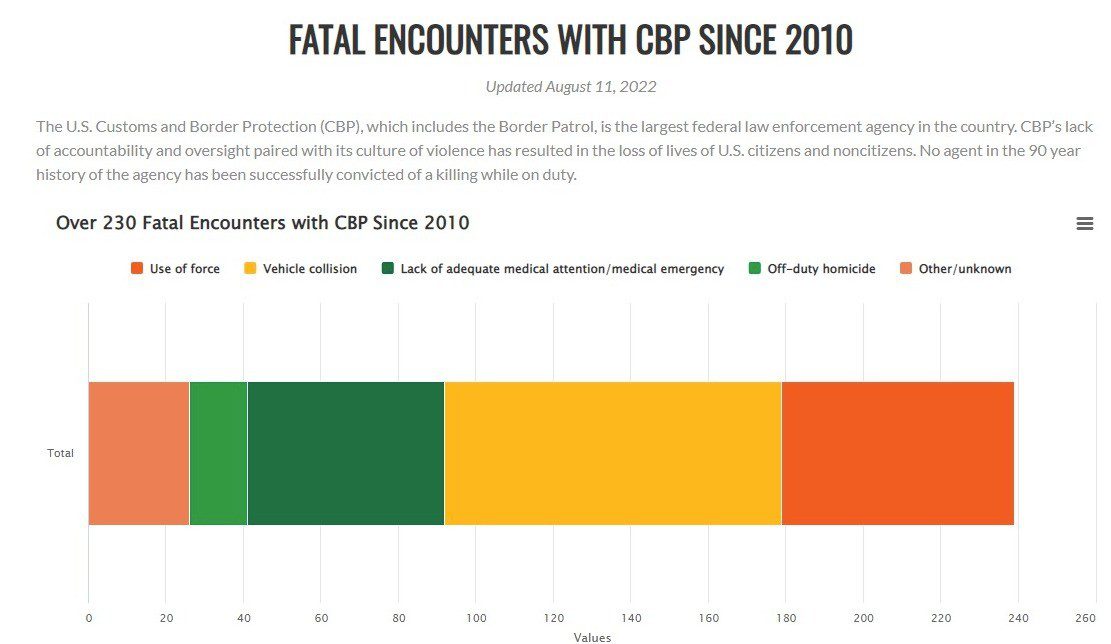 [Comment deleted: I told you at least 3 times you were only entitled to post a single comment in any thread. You’ve ignored that yet again. I will not let you and others with your views dominate my comment threads. I don’t have the energy or inclination to get down in the weeds with you and repeatedly point out your biases, propaganda and errors. It becomes pure tedium. Essentially, you bore me. And I detest boredom.

I also told you not to use IP proxies in order to conceal your identity. You continue to do so. If you can’t respect me I won’t respect you by permitting you to comment here. ]