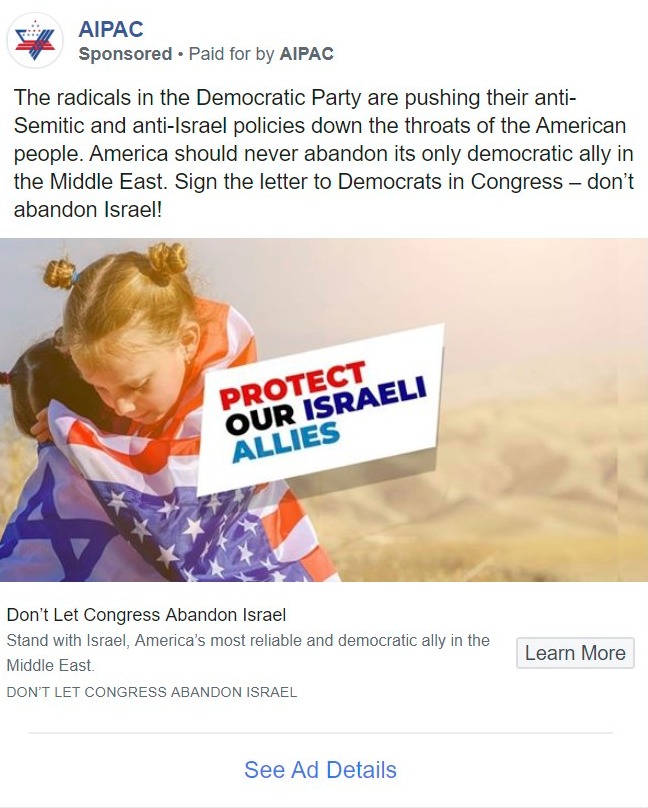 In late January, Aipac and a separate political group affiliated with it launched full-frontal attacks against the Democratic Party.  They didn’t couch the attacks as targeting the entire Party, “only” what they call its “radical” left-wing.  That is, those who “push anti-Semitic policies down the throats” of Americans.  What policies?  Ones like those advocated by Bernie Sanders, the first Jewish presidential candidate, who’s sworn his allegiance to Israel; but who is also prepared to leverage some of the $3-billion we give to Israel every year in order to suppress the worst of Israel’s apartheid abuses.  Yeah, that Bernie Sanders who is both anti-Semitic and anti-Israel for standing up to the Lobby; the Bernie Sanders who is leading in many national polls along with his millions of supporters, including many in the Jewish community.  All anti-Semites, if you believe Aipac.

From January 29-30th, Aipac spent $1,500 on a Facebook ad displayed here, which had 30,000 impressions.  It also placed ads warning that Democrat “radicals” (like Bernie) threatening to reduce Israel aid were “maybe more sinister” than “Iran, Hezbollah and ISIS.”

Today, Aipac had a change of heart and renounced the ads.  It released a statement that apologized for their harsh tone, while continuing to endorse the Islamophobic sentiment at their heart: 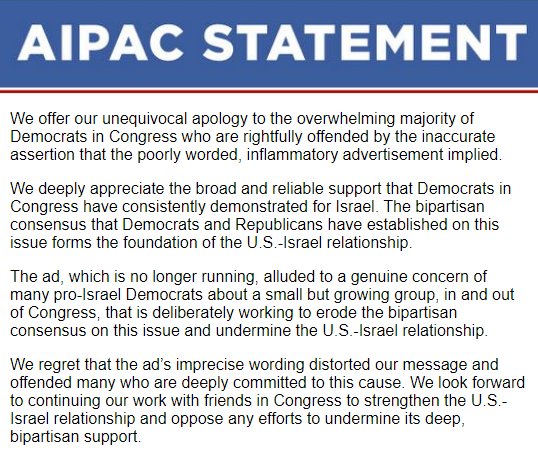 While it called the ad “poorly worded and inflammatory,” it stood by the heart of its criticism by calling out “a small group deliberately working to…undermine the U.S.-Israel relationship.”  Actually, the left-wing of the Party doesn’t have to do this.  Israel itself and its apartheid racist policies are undermining this relationship and driving all Americans away from it.

This of course is not an immediate divorce.  It is an evolutionary development taking place over years, which will eventually drive an inexorable wedge between both Democrats and independents and Israel (that’s why Israel is courting Christian evangelicals so ardently to replace this lost American support).  The Lobby’s problem is that progressive Democrats are the most vocal in pointing out evils of Israel’s policies.  That’s why Aipac tries to shoot the messenger, rather than address the problems at the heart of the pro-Israel message.

The slogan of this year’s conference is “Connected for Good.”  This is more than wishful thinking.  Israel and the U.S. are not connected forever as the “for good” phrase presumes.  They are connected as long as the American people believe they share common values. When that perception ends, the “connection” ends.  And as for the connection between the two leading to “good,” that’s certainly debatable considering its war crimes and the apartheid regime it maintains.

Another mysterious group calling itself Democrats Against Anti-Semitism even questioned Sanders’ Jewishness by calling him “ethnically-Jewish.”  This is a term of art of far-right Zionists and Orthodox Jews who question the “purity” of progressive Jews by claiming their Jewishness is only skin-deep. In other words, their left-wing political views disqualify them as being “real Jews.”

Separately, the NY Times reported on January 28th that another pro-Israel group purporting to consist of pro-Israel Democrats did a $700,000 ad buy in Iowa targeting Bernie Sanders.  Though the video the group aired didn’t focus particularly on Israel, the clear mission of the DMFI is hitting Sanders’ Israel policy in the gut.  The group’s chief, Mark Mellman, falsely labeled Sanders’ surrogates like Linda Sarsour, Alexandria Ocasion Cortez and Ilhan Omar “Israel haters” who’ve “repeatedly made anti-Semitic statements.”  He also criticized Elizabeth Warren for hiring one of the co-founders of the progressive Jewish youth NGO, If Not Now, falsely claiming it does not recognize Israel’s right to exist. He said it was:

“…Deeply troubling at a policy level that he cofounded an organization that does not recognize Israel’s right to exist.”

Thus it is no surprise, and an indication of the rising strength of the progressive Jewish voice in the Party, that when an If Not Now member asked Warren to commit to skipping the Aipac national conference next month, her succinct response was: of course.  She also refused to go last year.

Those of you who are particularly alert will note the dates of these two separate ad buys which I listed above.  Both the DMFI and Aipac ads were made within 24 hours of each other.  Aipac, of course, claims the former group is totally independent of it.  But in fact, I’ve called it the Democratic arm of Aipac.  Because Aipac has made the increasingly hostile stance toward the Party over the past few years (including deliberately sabotaging the Obama nuclear deal with Iran), it has lost credibility not only within the left-wing, but throughout the Party.  So the Israel Lobby group appears to have decided it needed to create an entirely new one ostensibly allied with Democratic interests, while covertly adhering to an Aipac strategy.  Though there’s no smoking gun to prove coordination between the two ad buys, it wouldn’t surprise me in the least if there were.

The upshot of all this is that Democratic presidential candidates need to follow in Warren’s lead: they all must reject Aipac and refuse to speak this year.  It will be hardest for Biden, because he has been a welcome guest at such meetings for years.  The pro-Israel Happy Warrior has made scores of ardent speeches there touting his credentials as a lover of Zion.  Will he step away this year?  Can he afford to, given his many Aipac-associated major donors?

In a way, it hardly matters what Biden does.  His poor showings in Iowa and New Hampshire have put his entire campaign on life support.  Though it’s premature to write him off entirely, so far (and barring the entry into the race of John Kerry or some other ‘savior’ of the Democratic Establishment) the race looks like a showdown between Sanders and Buttigieg.  By the way, my money is on the latter to agree to appear at the conference.  If he does, this will mark yet another clear distinction between Sanders’ progressivism and Buttigieg’s title as the stalking-horse of the Party’s Clinton-wing.

You must carefully read and respect the comment rules.  Your first comment is moderated and approved by author. Comments violating the rules will be deleted.
Subscribe
3 Comments
Oldest
Newest Most Voted
Inline Feedbacks
View all comments
nessim dayan

the roots of that reach far into the bibi’s household, bet my dirty underwear.
nothing that aipac does is not coordinated with the failed likud leadership.
as the writer in the Intercept wrote – FEAR is the enemy of democracy, WHO IS NOT BUT THE FATHER OF FEAR MONGERING but BibI , he’s been at it since he left the army and decided to be the boy toy of the halachic “republic”

You intentionally conflate between Sanders and the trio Linda Sarsour, Alexandria Ocasion Cortez and Ilhan Omar.
You also conflate between two ads campaigns that has nothing to do with one another.

You intentionally conflate between Sanders and the trio Linda Sarsour, Alexandria Ocasion Cortez and Ilhan Omar.

No, I don’t. The attacks by Aipac and the DMFI target “radical Democrats.” Anyone with two eyes in their head and half a brain understands that Sanders is considered by them a “radical Democrat.”

You also conflate between two ads campaigns that has [sic] nothing to do with one another.

Both my blog posts and the articles to which I link which you clearly neglected to read make crystal clear the deep connections between the 2 groups.

If you want to pimp for Hasbara Central on English language websites, I’d brush up your English grammar. It needs work.