The so-called Democratic Majority for Israel, an unacknowledged “co-conspirator” of Aipac, has unsheathed the knives on Bernie Sanders now that he is the front-runner in both the Iowa and New Hampshire primaries. Formed a year ago, to minor fanfare and a mandatory profile in the NY Times, the group appears to be the Democratic arm of Aipac, whose mission is to enforce Party discipline on straying presidential candidates. Given how closely all of them hew to the pro-Israel party line, 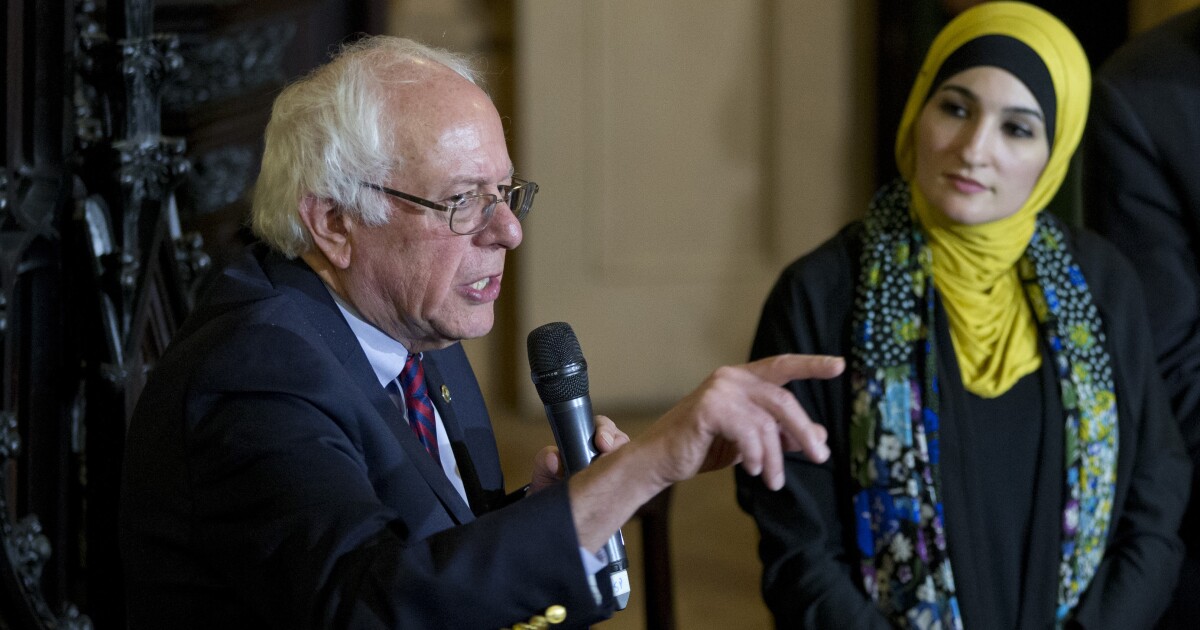 How do Aipac and DMFI hate Bernie? Let me count the ways: Linda & Ilhan & Rashida…

this has in effect meant taking Sanders to the woodshed for abandoning so-called Party consensus and calling for a reduction in U. S. Aid to Israel, and accepting endorsements from the bêtes noire of the Democratic establishment: Rashid Tlaib, Ilhan Omar and Linda Sarsour, among others.

DMFI PAC, the supposed independent arm of the NGO, has raised $700,000 for a single battery of anti-Sanders ads (see video above) in Iowa. It has never revealed its donors. The Federal Election Commission has no records of the PAC’s receipts or expenditures. I have sent the group’s media contact questions and have not heard any response. I will update if there is. While there is a large array of possible donors among the Wall Street elite, I’d hazard a guess that Haim Saban is one of the main donors to this effort. He is the Democratic equivalent to Sheldon Adelson. Just as rich, just as pro-Israel.

DMFI is a 501c4 organization, whose purpose is supposed to entail promoting “social welfare.” Here is the IRS definition:

The promotion of social welfare does not include direct or indirect participation or intervention in political campaigns on behalf of or in opposition to any candidate for public office. However, a section 501(c)(4) social welfare organization may engage in some political activities, so long as that is not its primary activity.

Technically speaking DMFI is not opposing Bernie Sanders. Its PAC is. But the former’s purpose appears almost entirely political, which is a violation of its status. One reason DMFI is a 501c4 is that it doesn’t have to files its donor list, as 501c3s do. That’s why you may never learn which pro-Israel billionaires are funding this anti-Bernie poison.

At least one founding board member, Paul Begala, was disenchanted enough with the attack ads that he suspended his involvement with DMFI for the duration of the presidential campaign. Though he is a dyed in the wool Clintonite, at least he understood that the Party eating itself helps no one but Trump. One hopes that more might consider doing so. 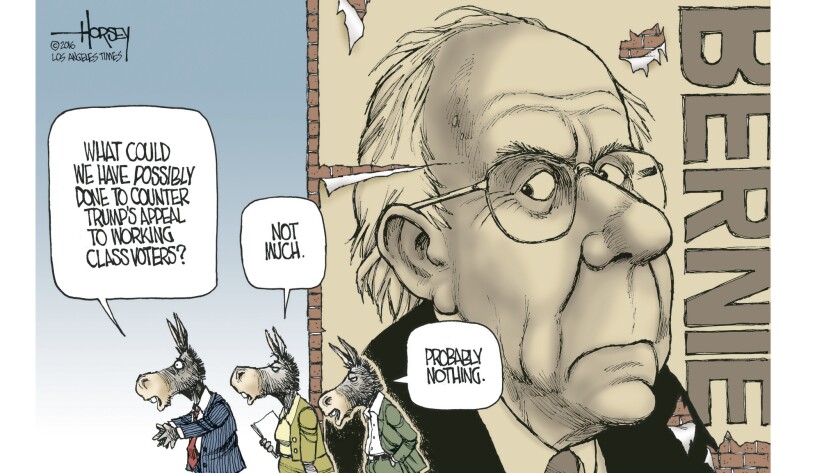 Though none of the ads attack the candidate for his supposed anti-Israel attitude, it clearly is the primary motivation of the PAC. In this case, since there are relatively few Jews in Iowa and Israel is not a burning issue there, the ads remind voters that Bernie had a heart attack, and target his supposed vulnerability as a “socialist” candidate out of touch with the average Democratic voter, especially in Midwestern states like Iowa and other battlegrounds. What the ads omit is that Bernie is the perfect candidate for the working class voter wherever he or she lives. Members of the working class face the same challenges everywhere in this country. There may be some divergence based on region or geography, but affordability of health care, education, and basic life necessities are universal issues in this country.

Actually, Bernie loves it when these ogres rear their ugly heads to attack him. It only revs up his faithful who come to his aid in droves to drive off the attackers. In this case, Sanders raised $1.4-million in a single day after they put out the word about the attack ads. I’d urge you to donate as well to teach these bullies a lesson.

Interestingly, DMFI’s strategy seems to have been torn from the failed playbook of so-called moderate Republicans who formed a Never Trump caucus and raised funds in a desperate bid to deny Trump the Republican nomination in 2016. And look how well that turned out!

There is virtually no comparison between the actual platforms of Trump and Sanders. But their respective strengths are as outsiders mistrusted by the Party elites. They both are independent of these structures, which enforce a narrow ideological platform on the Party faithful. They both bring their own funding and ideas to the primary. This is precisely their appeal to their Parties’ respective voters.

DMFI claims it is independent of Aipac and nominally this is true. However, the vast majority of the board members are current or past staff members, board members or major donors to Aipac. DMFI doesn’t have to receive direct marching orders from Aipac Central to be a creature of the major U. S. Israel Lobby group.

Both Israeli far-right governments and Aipac itself have strayed far from their former bipartisan approach to U. S. Middle East policy. Most Jewish Democrats want little or nothing to do with the near-fascist government ruling Israel. As a result, Aipac has had great difficulty selling its brand to this constituency. Therefore, it created an ‘independent entity’ which appropriated the mantle of the Democratic Party in its name in order to continue having an impact inside the Party.

No one should be fooled by this trick. DMFI is Aipac in sheep’s clothing. It advances Aipac’s agenda. It might just as well have its headquarters in Likud Central in Tel Aviv. In fact, Mellman was until recently Yair Lapid’s main political consultant. No, his Blue and White party is not the Likud, but it isn’t that far from it. The only difference is that it maintains a veneer of democracy, while Likud has eschewed even that.

Among the key leadership is Mark Mellman and Ann Lewis, both long-time Party strategists who helped get Bill Clinton to the presidency. They represent the Old Guard, the Clintonite effort to maintain the Party as a corporatist, centrist entity. Their bread and butter clientele consists of Blue Dog Democrats who hearken to the distant call of centrism and Wall Street elites. If Sanders wins, they lose. There will be (and already is) a rising tide of progressive primary challengers who will turn the Party battleship in a leftward direction. That means they will lose that gravy train they’ve enjoyed since Clinton’s first election in 1992.

Mellman, as well, was the founder of United Against a Nuclear Iran. Not only was this group opposed to Obama administration policy on Iran, which negotiated the JCPOA nuclear agreement, it also served as a conduit between Israel and U.S. intelligence agencies. It was the Democratic Party’s advocate for regime change. A key founder and funder of UANI inadvertently caused the arrest of eight Iranian environmental activists who accepted funding from his charities without realizing his political agenda. After their arrest, the funder offered no support to them. Most still languish in jail. One has died there.

DMFI is a group built on spite, fear and mistrust. It defends a state based on apartheid, values the Democratic Party has opposed for almost a century. It is a lost cause just as Israel as presently constituted, founded on Nakba and maintained as a perpetual garrison state, is as well. There is another Israel that is possible and that will develop if it is to continue its existence: one based on full democracy and equality for all citizens without regard to religion or ethnicity. That is something DMFI desperately seeks to prevent.

Interesting to note that 11 of the 14 board members at DMFI have worked for, spoken at, volunteered with, or donated money to AIPAC.

Sanders the Bogeyman….
Jennifer Rubin, most annoying and unfortunate, as anti-Trump as she is in the Washington Post has been on an anti-Sanders campaign lately. But there are others. Bloomberg said he would vote for Sanders over Trump.. well that’s good.

@Potter: I expect nothing less from the daughter of Elliot Abrams. She’s a neocon, daughter of neocons. Her Never Trump stance is virtue-signaling.