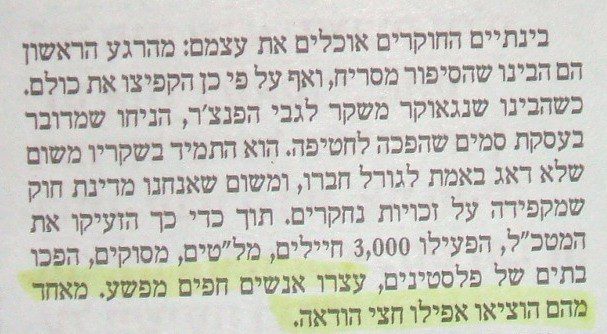 It all goes back to the “disappearance” of an Israeli, Niv Asraf, outside a West Bank village.  His partner, Eran Nagauker, told a story of a flat tire and Asraf’s entering a Palestinian village to get help, after which he disappeared.  As a result, the entire Israeli security apparatus went on red alert and began scouring the West Bank for Asraf.  The only problem…he hadn’t disappeared.  The entire incident was a hoax.  They later told a new story that Asraf devised the ruse in order to pretend to escape from his captors and win back an ex-girlfriend. At any rate, Nahum Barnea wrote this in his popular Yediot Achronot column (thanks to Or Shai and the Israeli blog, Hakol Shkarim (“It’s All Lies”) for catching this):

From the first moment, the story stunk.  Nevertheless, everyone went on full alert.  When they [the security services] discovered that the partner lied about the flat tire, they assumed it was a drug deal turned into a kidnapping…They called the IDF central command, brought out 3,000 troops, drones, helicopters, turned Palestinian homes upside down, arrested innocent individuals.  From one of these they even extracted a half a confession.

In other words, in rounding up the “usual suspects,” the Shin Bet managed to find one poor shnook they decided was guilty and managed to get him to confess.  The only problem: the poor guy, wanting to end the torture, confessed.  As Michael Kaminer suggested in his Facebook comment, the Palestinian didn’t know precisely what his interrogators wanted to hear.  Otherwise, it would’ve been a full confession.  And had the crime actually been real, they likely would’ve wasted precious hours interrogating an innocent man.

The whole thing reminded an Israeli friend of an old joke:

Three spy agencies, the FBI, KGB and Shin Bet, had a contest: who could be first to capture a fox in a dense forest.

The first fox was released.  Tens of FBI agents entered the forest with helicopters and sensors.  Within four hours they returned with the fox.

The second fox was released.  The KGB sent ten agents with eavesdropping equipment and within three hours the agents returned with wide smiles on their lips and with the fox in hand.

The third fox was released.  Two Shin Bet agents wearing sunglasses entered the dark woods.  After two hours they came out with a squirrel: “Under interrogation, he confessed he was a fox!”

When Richard recently referred to an extreme case of torture by Shin Bet, Shmuel, who is an Israeli reader of this blog I presume, protested saying that was slander.
According to him Shin Bet’s harsher interrogation methods merely consisted of causing physical discomfort or, even more innocuously, “psychological methods”.

Dr. Hanan Chehata’s briefing paper “Shin Bet: An Ingrained Culture of Torture and Deceit”. brought out by the London based Middle East Monitor group, provides some details about these methods.

I will not speak about the infamous back breaking “banana method” but concentrate on one of the most innocuous sounding ones: shaking. Now what is wrong with shaking? A mother gives a refractory child a ‘good shake’ and nobody worries about it. But with the Shin Bet shake we are in different territory altogether:

“The method is defined as the forceful and repeated shaking of the suspect’s upper torso, in a manner which causes the neck and head to swing rapidly. According to an expert opinion submitted in HCJ 5584/95 and HCJ 5100/95, the shaking method is likely to cause serious brain damage, harm the spinal cord, cause the suspect to lose consciousness, vomit and urinate uncontrollably and suffer serious headaches. The state entered several opposing expert opinions into evidence. It admits the use of this method by the GSS.”… “All agree that, in one particular case, (HCJ 4054/95) the suspect expired after being shaken.”

And what about those “psychological methods” a term that suggests some academic finesse.

A report by the Public Committee against Torture in Israel entitled Family Matters: Using Family Members to Pressure Detainees under GSS Interrogationxii, and quoted in Chehata’s briefing paper, suggests otherwise in outlining,:

“some of the key methods of psychological pressure frequently used against Palestinian detainees. For example, they are often subjected to threats that they will be killed or severely harmed by their interrogators, including threats to break their backs, physically disable and disfigure them and so on. Solitary confinement is another favoured tactic intended to cause psychological distress.

Another Shin Bet technique is to threaten family members of the detainees; apparently no one is off limits. Tactics include the use of staged scenarios to make the detainee think that their relatives are also in custody and are being subjected to torture as well as the actual arrest, detention and torture of family members in order to put pressure on the detainee to comply with the demands of the interrogators. This practice has been admitted by Shin Bet. “

The Israeli High Court forbade torture in 1999 (England and Wales abolished torture in 1641) except in cases covered by the “necessity defence” in which for instance one could credibly claim that a“ticking time bomb scenario” made it necessary.

But the “necessity defence” is open to wide interpretation and according to a recent Haaretz investigation “the cases in which torture is used are not rare and few …” (Haaretz 8/3/15).
Little of this comes out in the open. Shin Bet has its own cover up techniques of which Chehata gives full details. In short: the use of fictitious names in the encounters with prisoners; the absence of audio or video recordings of interrogation sessions; a dual system of documentation in which the “real” report remains secret; preventing the detainee from having any contact with the outside; the removal of medical documentation covering the periods of interrogation etc.

Complaints are in the first instance handled internally. From 2001-2010 there were 600 complaints about torture. None of these led to a criminal investigation

“It is estimated by B’Tselem that between 1,000 and 1,500 Palestinians are interrogated by Shin Bet annually. Methods which would constitute torture are used in approximately 85% of those cases; that’s 850 people every year being tortured in Israel. If anything, this is an underestimate.”

Come on, guys! We all know Israel is the ONLY democracy in the M-E and fighting for ts existence every second, from those unspeakable beasts surrounding it. A little firmness here or there, against the terrorists, only serves democracy.
America has no problems with what we do!

For the sake of accuracy, the Nahum Barnea article Richard cites to says, “almost confessed”, not confessed.
Nowhere in the article does is say that anyone was tortured.

@ Hefe: “a half confession” is not “almost confessed.” You’re misconstruing what Barnea wrote. And no Palestinian “confesses” to anything w/o being tortured during interrogation. And the kidnapping of an Israeli would increase the harshness of such torture.

I remember that several defendants in the Central Park Jogger Case confessed to a crime they hadn’t committed despite the fact that no torture was used to extract their confessions.

Perhaps this ‘half confession’ of which you write was also elicited without torture.

First, the Central Park jogger case is one case in a million. The city paid millions to the victims & NYPD took a huge beating. In another case in which a police detective falsely accused people of crimes there was a huge stink and many sentences were voided. None of that ever happens in Israel because there’s no accountability for police or Shabak. I don’t know there was no abuse in the Central Park jogger case. But in that case the suspects were all naive teenagers & highly susceptible to police manipulation..

Well. It looks like the arse just graduated from chach-chach school. I wonder if his frecha girlfriend was worth it.

Seems like this Palestinian forgot to ask “What am I accused of?”.

The distance between Barnea’s ‘half confession’ and the this article and title is humongous.