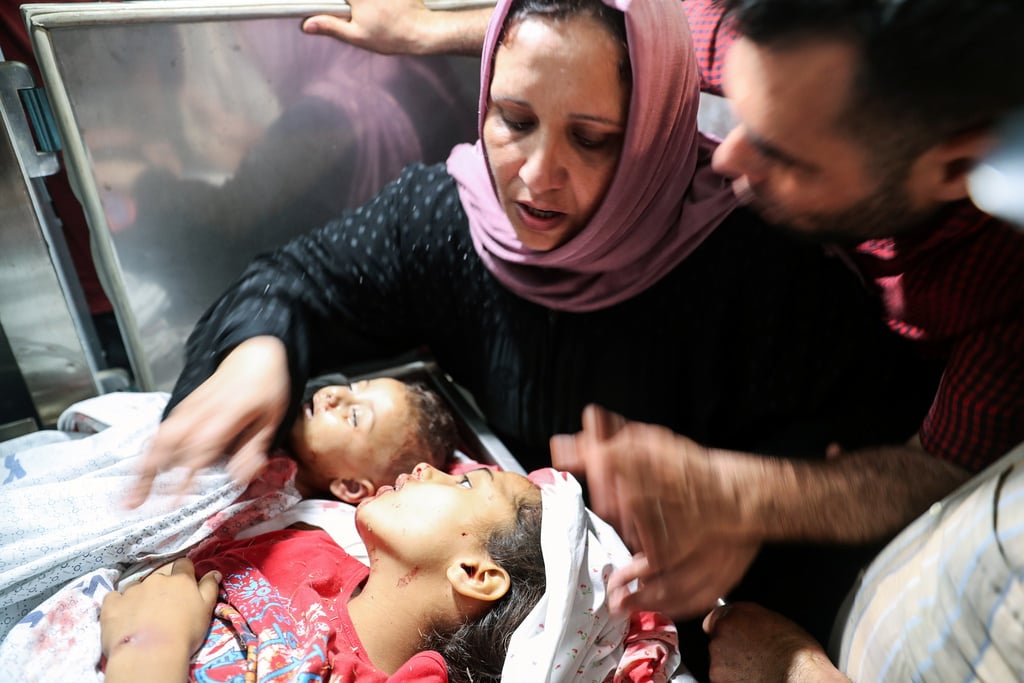 UPDATE: As soon as I posted a link to my Facebook account, its algorithm flagged the image to the left as content too graphic for its readers to see (see censored post to the right).  This algorithm censorship is repulsive.

As the conflict in Jerusalem spreads to Gaza, where Israel has just murdered 9 Palestinian children (24 dead in all) in air attacks, the time has come for the world to stop expressing “concern” and calling for “calm on both sides,” and do something.  Something real.  Something that matters. 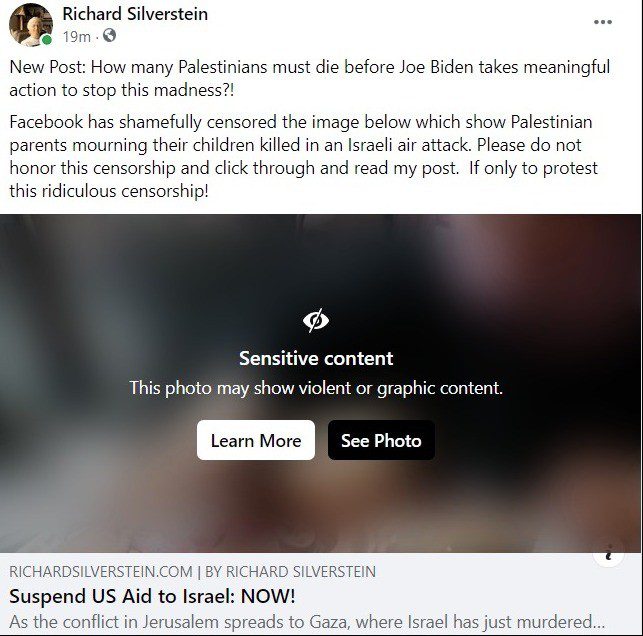 The only thing that matters and the only leverage the US has is its shamefully gross $38-billion 10-year aid package, a sweet-heart deal offered by Obama to buy off Netanyahu’s opposition to the JCPOA deal (it didn’t work).  The Biden administration must immediately suspend all forms of US aid to Israel until Israel withdraws all of its Border Police thugs from Haram al-Sharif and ceases all evictions of Palestinian residents in East Jerusalem.

Of course, it will not do so.  The US mission to the UN even refused to permit a Security Council resolution condemning the violence against Palestinians from coming to a vote. Read this and weep:

Fourteen of the 15 Security Council members backed the updated draft of the statement, but it failed to move forward after the US mission asked for more time to deliberate the matter, adding that such a step might not be useful at this time, two diplomats present told The Times of Israel.

In response to a query on the matter, a spokesperson for the US mission said, “The United States is engaging constructively to ensure any action by the Security Council is helpful in deescalating tensions.”

But just in case Biden was tempted to actually do something serious, Israel warned him to butt out:

Israeli officials said [national security advisor] Ben Shabbat told Sullivan during the phone call that Israel believes the Biden administration and the rest of the international community should stay out of the crisis in Jerusalem and avoid pressing Israel.

Ben Shabbat told Sullivan that “international intervention is a reward to the Palestinian rioters and those who back them who were seeking international pressure on Israel,” according to an Israeli official briefed on the call.

But there is no reason that progressive members of Congress cannot begin to make such a demand.  Bernie Sanders, for example, stop sounding like a typical liberal Zionist and let your freak flag fly.  We all know you’re with us and that you’re couching your language in terms that won’t offend liberal Zionists. Now is the times to shun former restraint and tell it like it is.  Before Gaza goes up in flames.  Before fires rage inside the Al Aqsa mosque and worshippers lie dead in its sacred halls.

The best progressives could manage till now was a vague demand that US aid be conditioned on Israel not being permitted to use it for settlements.  Rep. Betty McCollum is sponsoring a bill calling for conditioning aid on the release of hundreds of Palestinian children held in Israeli jails in violation of international law.  That’s all well and good.  But we need much more.

Alexandria Ocasio Cortez: time to redeem your shameful word salad response to the New York JCRC leader during a Zoom discussion. Time to stand up for Palestine as it comes under the most dangerous and damaging attack in years.  There are others: Marc Pocan, Ro Khanna, Ayanna Presley, Cori Bush, Pramila Jayapal.  Have the courage of your progressive convictions.  Now is the time.

To give you a taste of Israeli sentiment amidst today’s air strikes which killed 9 children among the 24 who died:

This is a video of Judeo-Nazis “celebrating” on Jerusalem Day before the Western Wall. They are singing a song that incites genocide. It is a quotation from Samson,  after his eyes have been plucked out and just before he uses his last ounce of strength to topple the pillars of the Philistine [stand-in for Palestinians in settler terror lingo] temple:

“Sovereign Lord, remember me. Please, God, strengthen me just once more, and let me with one blow get revenge on the Philistines for my two eyes.”

This song was also sung at a wedding following the murder of the Dawabsheh family by an arson attack perpetrated by settler terrorists.   Guests at the terror wedding held high a picture of one of the dead children and made stabbing gestures at the image with rifles. It was a lovely site to behold.

They remind me of the settlers in Zion Square in 1995 baying for Prime Minister Yitzhak Rabin’s blood. In this case, they’re baying for Palestinian blood.  If you are a Diaspora Jew you must be revolted at this Nuremburg-like frenzy. The burning building in the background above the Wall reminds me of the burning torches at the Charlottesville rally. Can you really call these people Jews? Does their religion resemble anything you would call Jewish? 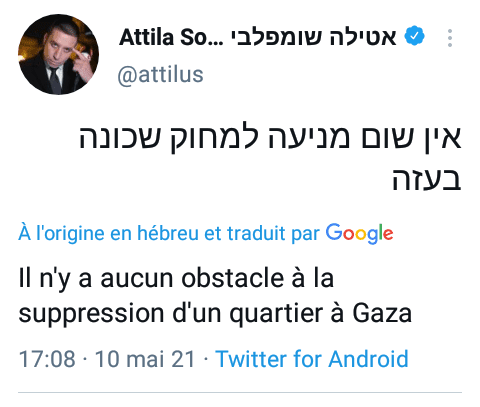 One of Yediot Achronot’s veteran reporters, Attila Somfalvi tweeted this: “There is nothing now constraining us from eradicating a Gaza neighborhood.”  As soon as tweeps noticed it, he removed this promotion of genocide.  I asked Yediot whether this represented the newspaper’s views and, if not, what it would do to separate it from them.  No response yet.

Another one of Israel’s most noted center-right columnists, Ben Caspit tweeted in response to another newspaper editor, who noted it was time to dust off IDF operational plans for attacking Gaza (h/t David Sheen):

“I suggest less [operational plan] steps and changing [plan] names. More deeds. For example, tonight taking down the highrises in the Tuffah neighborhood [of Gaza]. With prior warning, of course!”

Unlike Somfalvi, Caspit has left his genocidal tweet-cheer on his timeline for all to see. Nor are these two “journalists” among the more extreme of Israeli media. They aren’t equivalent to Breitbart or Newsmax, not outliers. They’re as mainstream as you come. Which is why these sentiments are all the more disturbing.  Most Israelis would cheer these sentiments on. Genocide, shmenocide. Who cares. They’re destroying our country and we can’t permit it.  End of story.

It is a shame there is no ICC equivalent for journalists.  They have a huge impact on reader sentiment.  Indeed, in Rwanda the genocide was incited by radio broadcasters. Journalists have an obligation to refrain from promoting genocide–at the very least.  If they are not disciplined for it, they deserve to be put in the dock at The Hague.

Sometimes I’d rather not turn out to be right.

I don’t expect any of this to happen unless and until Americans are in the streets in big numbers demanding this happen. The thing that everyone knew was going to happen is that the Democratic base would go back to sleep because the orange fascist was no longer tweeting mean things from the Oval Office. Now that he’s gone, a large majority of them don’t care any longer. That has to change, not just on this issue, but on workers rights and health care and police brutality as well.

Israel hadn’t blocked the Damascus Gate, but threw up barriers preventing worshippers from sitting down on a street level promenade. Worshipers could still enter and exit through the Gate.
Those barriers, which were public safety restrictions, were promptly removed, but rioting broke out anyway at the Damascus Gate and the barriers were put up again in response.
Still, worshippers could enter and exit the Gate.

Than Hamas starts rocketing Israeli civilian centers near the Gaza border, every single rocket launch, a per se War Crime.
No condemnation from Tikkun Olam for War Crimes perpetrated against Israel by Hamas.

Now in the interest of fairness and accuracy, you claim that Israel just murdered 9 Palestinian children, but the article you linked said the family of seven that died, including 3 children, died as a result of an ‘explosion of unknown origin’. That family may well have tragically died when a Hamas rocket fell short and landed within Gaza itself.

Please. Lets not jump to conclusions.

Apologizing for Israel’s genocidal actions against Christian and Muslim Palestinians again. You have become a broken record, justifying the racist/colonial/squatters that jump up and down like ‘jack-in-the-boxes’ when they see the Al Aqsa compound burning. You are no different than the compliant Germans of WW II, the white racists of South Africa, and the KKK in the US. It’s good that Richard is generous enough to not block your vile comments so the rest of us can witness what ‘good Israelis’ really think. Shameful.

Have lost all respect for Ronnie Naftaniel … was former spokesperson for CIDI in Amsterdam with task to make the community aware of anti-semitism. Evolving as a Lukudnik and now spouting pro-Israel and rightwing rhetoric. True colors. How does a person of reason become an unreasonable man? 😡

The Right of Self-Determination of the Palestinian People

“2. To develop friendly relations among nations based on respect for the principle of equal rights and self-determination of peoples, and to take other appropriate measures to strengthen universal peace;

This sentiment in Israel, whipped up at opportune times with such incidents, fed continuously is a modus operandi with an ultimate goal which is not peace.It’s a disease. It’s so disappointing that our hope for a stronger more progressive Biden policy towards Israel, conditional aid, is not going to happen, was not going to happen with Biden-Blinken.If Israelis want us to butt out, we should, entirely. We otherwise have zero to say about any subjugation anywhere.

Would you like your children or your neighbor’s toddlers to see this picture?

All Facebook has done is to warn users. Many people do not want to see this sort of image. It is a common practice and your outrage is unclear. Calling it <span style="color: rgb(34, 34, 34);">censorship might suggest you don’t understand the difference.

Frankly, though, the image you should highlight are those of brave Palestinian smiling faces under a “George Floyd” duress. Epic!

Strong condemnation from the Muslim world, including Abraham Business Partners Emirates and Bahrain.

The Ministry of Foreign Affairs expressed its condemnation in the strongest terms of the blatant attacks carried out by the Israeli occupation forces, against the sanctity of the Al-Aqsa Mosque, and the safety and security of worshipers.

Let’s see the Abraham Business Partners cut off business. Condemning means nothing at this stage.

Richard: since you think Samson was inciting genocide as a now-blinded Jewish prisoner, what should Samson have been saying as you rewrite Hebrew history? (Ref: They are quoting Samson’s words at the Philistine temple: “Sovereign Lord, remember me. Please, God, strengthen me just once more, and let me with one blow get revenge(AN) on the Philistines for my two eyes.”)

@Bruce: THis has nothing to do with Samson and you know it. This is Judeo-Nazis exploiting Biblical text on behalf of anti-Palestinian genocide.

I think that if we were at holocaust time . You will be the one to justify the killing of jews by the German nazzie regime