Israel’s senior Opposition leader, Moshe Yaalon, told a Saudi Arabia media outlet that the explosion in the Beirut port was initiated in a Hezbollah arms cache located there:

Ya’alon said that an explosion in a weapons depot belonging to Hezbollah preceded the explosion in this chemical warehouse and that the terror organization controls both Beirut port and Beirut airport. 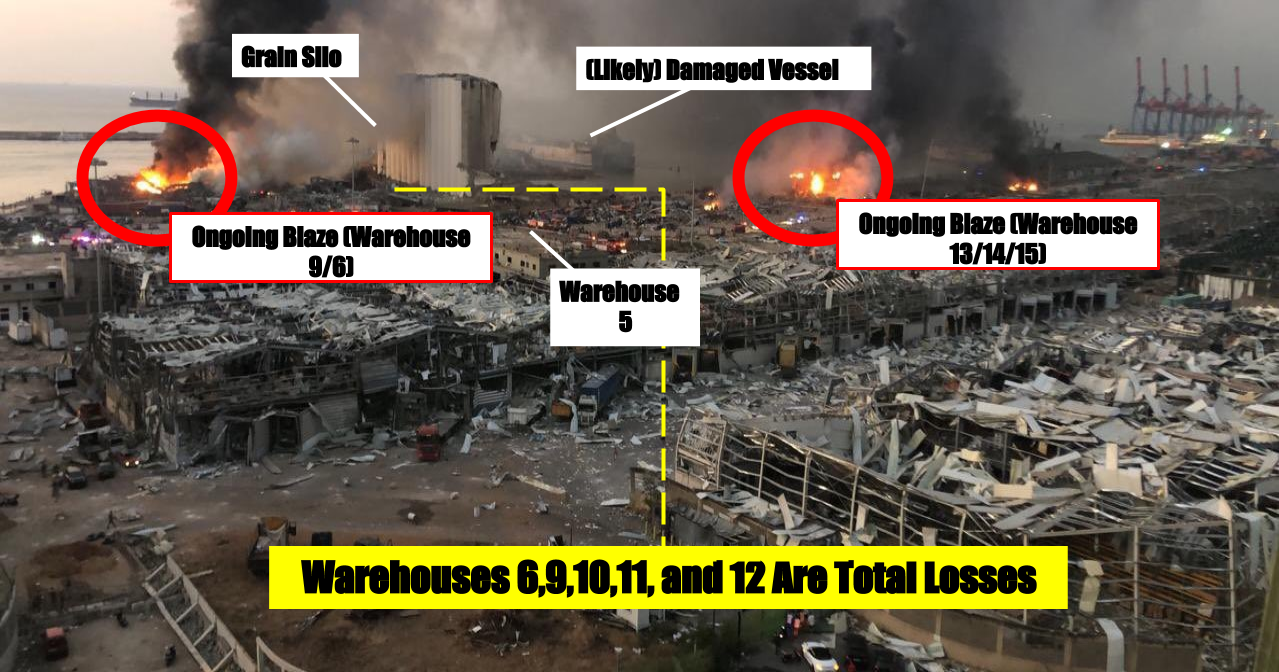 Warehouse 9 (on left) is the location of the Hezbollah arms facility. Warehouse 12, which stored the ammonium nitrate is to its right (indicated by the yellow dotted line)

This is the first Israeli official confirmation of a major part of the story I’ve reported–that Israel bombed the Hezbollah site in order to destroy the weapons stored there.

Yaalon couched his revelation in a manner that blamed Hezbollah, rather than Israel, for the tragedy by claiming that the militant group knew there was ammonium nitrate stored in a nearby warehouse. This conveniently minimizes Israel’s culpability for the crime. It also glosses over the fact that, according to my source, Israeli intelligence didn’t realize the fertilizer was stored in a nearby warehouse either, which is how it precipitated the entire tragedy.

Yaalon also lays to rest two objections offered by skeptics who doubt the narrative of Israeli involvement.  First, he says that Hezbollah controls both the Beirut port and airport.  Even if he is exaggerating, this does clearly indicate that Hezbollah would maintain an arms cache stored at the port.  It also puts to rest the claim that a fireworks explosion or welder’s torch caused the initial explosion (red herring claims bruited about in media outlets like the Guardian). In an earlier post, I noted that veteran CIA analyst, Robert Baer, argued that military munitions, rather than fireworks, consisted of the first explosion, which later ignited the second warehouse.

The Israeli leader further confirms the arms depot caused the second catastrophic explosion.  Though Yaalon would like you to believe this was Hezbollah’s fault, it wasn’t. And this was a convenient way for him to get the story past the Israeli military censor.

It is also interesting that Yaalon chose to publish the story in a Saudi Arabian media outlet, Elaph, which seems to be the go-to Arab media outlet for Israeli leaks that highlight its budding ties to the Sunni world and Gulf states in particular.  Also, the Saudis would be quite pleased publishing a story that embarrasses one of their Shiite rivals, Hezbollah.

My prediction is that Yaalon’s comment will open the floodgates for others to reveal more about the circumstances of the Israeli attack. Those new developments will further confirm the broad outlines of the report from my well-informed Israeli source.

If we want to speculate about the origin of the original story, it’s always useful to look at internal rivalries to see who would want to take down a competitor.  In this case, the Israeli attack would likely have been planned either by either the Mossad or AMAN (military intelligence).

A current story in Haaretz notes that Mossad chief, Yossi Cohen, is especially peeved at figures from the Shin Bet for usurping the former’s role in cultivating ties with the Arab world.  This is one of the most important functions of Mossad in terms of eliciting intelligence and recruiting assets. Cohen is known for being a fearsome protector of the Mossad’s turf and did not take kindly to the Shin Bet figures beginning to cultivate such ties as well.

If the Mossad did plan the operation that failed, those Shin Bet rivals might be motivated to give Cohen a black-eye by leaking the story.

Moshe Ya’alon speaking to a Saudi publication naturally will put blame on Hezbollah. That part is not the essence, “admitting” the initial explosion of a weapons cache is! Only such a powerful blast will detonate explosive material like Nitroprill XP.

You got it. Right on the money!

Double-cross does not sit well in Washington DC

I hate being a dreadful bore, but isn’t Warehouse 9 located on the opposite side of the grains silos?

Those grain silos that largely withstood the Richter scale 3.3 blast at Warehouse 12.

Soooo…how did the supposed explosion at ‘Hezbollah Warehouse 9’ jump the impenetrable grain silos and cause Warehouse 12 to detonate?

@ Limey: The grain silos “withstood the blast?” Really, they look like a row of skeletons with their heads blown off. The only thing you can say about them is that parts of them remain vertical. Other than that, nothing.

I’m really uninterested in 9/11 type speculation about buildings and why one fell or another didn’t. That’s getting way into the weeds, where of course you’d prefer to be in order to distract from the major issues.

Do not publish again in this thread.

Blaming a mysterious stockpile of ammonium nitrate would also be a convenient cover for a more serious missile attack. Has anyone considered the “rods from yahweh”. https://www.businessinsider.com/air-force-rods-from-god-kinetic-weapon-hit-with-nuclear-weapon-force-2017-9?IR=T

&Limey … nice observation .. warehouse #9 was intact the moment of the big blast – see BBC imagery – what sort of weapon caused the desintegration of #9 .. explain that to me pls

Trump may be right about Beirut ‘attack’ | Asia Times |
https://asiatimes.com/2020/08/trump-may-be-right-about-beirut-attack/

“ what sort of weapon caused the desintegration (sic) of #9 .. explain that to me pls”

Oui. I don’t know that a weapon destroyed Warehouse 9.

Warehouse 9 wasn’t exceptional. It was flattened same as all the warehouses at the Port.

So, if Warehouse 9 was standing, and neither damaged or burning when Warehouse 12 detonated, than where does that leave Israel?

Blameless, and deserving a proper apology, I say.

Unfortunately behind a pay-wall …

Who profits from the Beirut blast? | Asia Times – Pepe Escobar |

Making the case that the explosion resulted from an attack

Usually the articles by Pepe Escobar are trustworthy … this time there are some crucial errors … furthermore the publication at the Saker is in a crowd with anti-semitic commentators … not happy with the link.

@ Donald: Don’t you dare impugn my credibility or that of my source. Do that again and you will be moderated or banned. My source has a record of 100 or more accurate stories documenting Israeli national security abuses, excesses and even crimes. What do you have? Bupkis!

I agree -100 percent. Also if the accusation against Israel is true, it is inevitable that sooner or later some strong and compelling evidence will emerge and enter the public domain. Now that time has passed we can see that evidence and it consists of.