The standard line of pro-Israel apologists since the days of Abba Eban, who invented this lie, is Palestinians have “never missed an opportunity to miss an opportunity.”  In fact, precisely the opposite is true.  It is the Palestinians who’ve negotiated in good faith and been receptive to compromise after compromise, and the Israelis who have refused to budge.  Remember Oslo?  Remember the Road Map?  Remember Barak’s refusal of the Golan deal?  Remember Olmert’s refusal of a similar Syria peace deal brokered by Turkey?  Israel’s decades-long refusal to address the 2002 Saudi peace initiative? To this day, the majority of Palestinians would accept a two-state deal if one were put on the table.  It is Israelis who oppose it (recent polls indicate that 51% refuse to give up settlements).

This history of Israeli rejectionism, it turns out, holds true of Israeli relations with Iran.  We all know about Khatami’s proposed 2003 Grand Bargain with the Bush Administration, which would have normalized relations between the two countries and probably avoided fifteen years of immense pain and suffering in the region.  Dick Cheney put the kibosh on that initiative.

What’s less well known is that the Iranian government has made similar initiatives toward Israel.  And its government too has summarily rejected any hint of compromise.  Barak Ravid reports in both Axios and Israel’s Channel 13 that while Oman was brokering secret talks between the Obama administration and Iran in 2013, eventually leading to the JCPOA nuclear deal, the Sultan was offering a similar back-channel to Israel.  He had the confidence and trust of the Iranians and proposed that the Israelis talk with their enemies in an effort to find some common group and lessen the opportunity for conflict:

The message from Oman to Israel at the time was, “Even if you don’t agree on anything, engagement leads to de-escalation and non-engagement could lead to war,” according to the former Israeli officials. 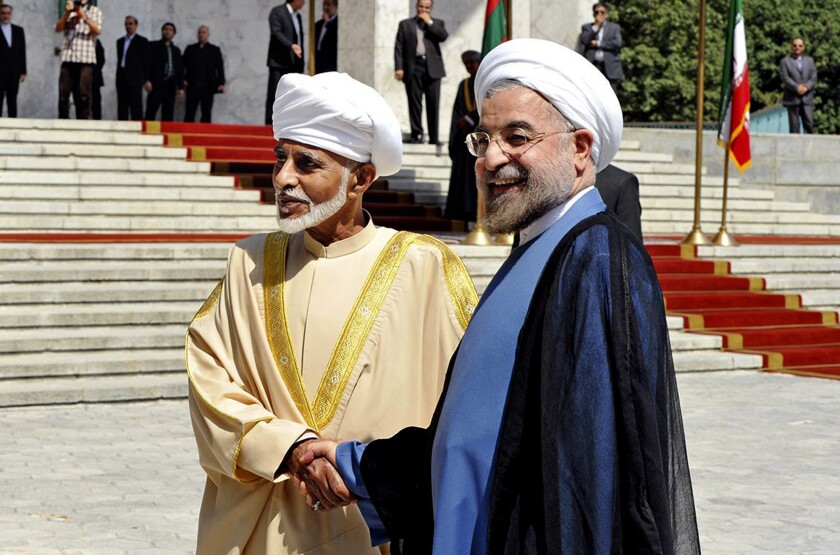 It’s important to remember that by 2013, Israel had already stood on the brink of war with Iran not once (in 2009), but twice (in 2012).  Netanyahu had begged both Bush and Obama to mount a joint U.S.-Israeli attack on Iran’s nuclear facilities, which each president had wisely rejected.  However, Netanyahu had seriously pursued a go-it-alone attack by Israel on these same targets.  Only united opposition for all Israel’s top intelligence and military commanders forced the PM to stand down.  Oman likely knew a good deal of this and sought to mediate in order to lessen the prospect of such a disastrous conflict for the region.

Then Mossad chief, Tamir Pardo, brought the proposal to his boss, Bibi Netanyahu just a few weeks after Rouhani’s presidential election victory.  The PM was likely intimidated.  He predicated his entire political career on upholding firm rejectionist principles toward Israel’s Arab-Muslim enemies.  He probably realized that to pursue this path would mean transforming his entire ideological approach and being forced to justify it to his rabidly nationalist followers.  This is something like what DeGaulle did in Algeria and what Rabin tried to do with Oslo.  Other Israeli prime ministers like Barak and Olmert also faced daunting but promising peace proposals they rejected for similar reasons.

Netanyahu, an excellent political tactician, does not have the strategic vision to understand how to accomplish such a transformation.  So he retreated from it.  He called in Yaakov Amridor, his hawkish national security advisor, who he knew would detest the Omani proposal.  Together, Amridor and Netanyahu made clear to Pardo that they summarily rejected it.

They permitted their fear and hate to overwhelm the possibility of unfreezing the intractable, forty-year bloodbath that has constituted Iran-Israel relations.  In part, they did this because they preferred the politics they knew over the unknown political future which a rapprochement presented. They realized that if such talks succeeded, they would have to turn decades of Israeli policy on its head.  They would have to ratchet down the anti-Iran hysteria they’d stoked among the populace.  They would have to contemplate one less demon to use to enforce their regime of fear and distrust of Israel’s enemies.  This regime had worked ever since the first Likud election success in 1977 to maintain a far-right nationalist dominance in Israeli politics.  Who knew if they dropped this approach with Iran whether it might blow up in their face with the hardline electorate?

Also, their general attitude of suspicion and mistrust of enemies and even allies like the Obama administration, encouraged them to suspect a trap.  Amridor argued that if the Israelis talked to Iran that the Americans would leak word of it and this would undermine the hardline rejectionist approach Netanyahu had been advocating for years.

There is one major error in Ravid’s report: he claims that Netanyahu, when he returned to power in his second term as prime minister, invoked a directive forbidding the Mossad from having contact with Iran, a policy not maintained toward any other nation.  But in fact, Muhammad Sahimi reported in 2016 that Iranian intelligence did have covert contacts not only with the Mossad and CIA, but with at least one government minister in 2010, after Netanyahu issued his supposed directive.  In fact, the key Iranian official who pursued them, and who was hounded and imprisoned by Iranian hardliners for his temerity, wrote public letters to both Pres. Rouhani and Ayatollah Khameini outlining his efforts:

“My contacts with Israel’s intelligence agency [the Mossad] and my trip to the Occupied Territories were on the order of the counter-intelligence directorate of the Ministry of Intelligence and related to the Bahram Operation,” Dadkhah wrote in a letter to Khamanei in September, 2013.

Dadkhah also wrote, “I have been charged with having a CIA contact but my communications with “Stephen” [presumably a CIA official] in Geneva were within the framework of US negotiations regarding the future of Afghanistan. I never engaged in personal communications with him. It should be pointed out that he [Stephen] was a member of the US negotiations team. I’m also accused of meeting with Israel’s Minister of Industry … This meeting took place in 2010 on the order of and in coordination with the Ministry of Intelligence.”

Interestingly, who was the then-minister of industry in Israel?  Binyamin Ben Eliezer.  This former defense minister and IDF general was also the source of many of my scoops and breaking Israeli national security stories here until his death.  I’m not surprised he would be eager to meet with such an Iranian official.  Dadkhah eventually was freed and left Iran for exile in Europe.

I suppose Pardo is lucky that he didn’t end up in prison, like Dadkhah did.  But at least he had the courage to envision a different future for the two nations’ relations with each other.  This is something neither Netanyahu nor Amridor, in their strategic blindness, could entertain.  And it is but one of many reasons why Israel had continually blundered–or perhaps intentionally sabotaged–every such overture when offered.

Oh and in case you’re wondering…now both the PA and Iran refuse to have anything to do with either the U.S. or Israel.  That tends to happen once a door has been slammed in your face too many times.

Comments are published at the sole discretion of the owner.
Subscribe
6 Comments
Oldest
Newest Most Voted
Inline Feedbacks
View all comments

Richard says: “To this day, the majority of Palestinians would accept a two-state deal if one were put on the table. ”

I’m not so sure of that, Richard.

Not according to the latest polling of Palestinians:

@ Lemontree: Thanks for that. I was basing my statement on past polls and hadn’t realized that of course, as Israeli extremism and intransigence increases, so would Palestinian resistance to it and support for 2 states would fall as well. Even still, considering the level of Israeli rejectionism, it’s amazing that the level of support for 2 states is as high as it is among Palestinians.

Here is another opportunity for peace that Israel missed and unfortunately Barack Obama and Secretary of State Kerry missed this too when Kerry spoke with Palestinian President Abbas in 2014. “The Palestinian president told hundreds of young Israeli activists on Sunday that he does not want to “drown” Israel with Palestinian refugees, in his most conciliatory comments to date on one of the thorniest issues in Mideast peace talks. The statements by President Mahmoud Abbas suggested new flexibility on the “right of return,” the demand by hundreds of thousands of Palestinians displaced in the war surrounding Israel’s creation in 1948, and their descendants, to return to lost properties in the Jewish state.” Palestinian President Abbas accepted every proposal offered by Kerry including having a NATO force in the West Bank. Netanyahu rejected all of this. All Obama and Kerry did was to wring their hands, because they didn’t want to take on AIPAC. There is an old article or 2 that I cannot find now, However here is a link. https://www.nytimes.com/2014/02/03/world/middleeast/palestinian-leader-seeks-nato-force-in-future-state.html?_r=0

Great teamwork in the Obama administration, first you have President Obama demanding a complete settlement freeze from Israelis. In view of failure you have Secretary of State Clinton visit Jerusalem to praise great strides forward by Netanyahu in completing WB building program. You condemn PM Abbas for expecting a settlement freeze on disputed territory before negotiations are to start. Next you have her demand further concessions from Palestinian leadership and Arab states. Finally she changes itinerary to visit Cairo and Mubarak to complete the US mystification in starting any fruitful negotiations between parties. No wonder many more nations are getting fed up with US “diplomacy”.

Settlements: The ‘Pause’ That Doesn’t Refresh

At one time, I really believed the Obama administration could advance the peace process. But not with delusional statements like this from Madame Secretary:

What in the world is she thinking or smoking? What peace process? And “forward?” Try backward. Try nothing. It does nothing. It fools no one. It’s a fig leaf that allows the U.S. and Israel to say they’ve achieved something when they’ve achieved nothing. In fact, it may be said that in raising expectations and disappointing so many, it’s actually set the alleged peace process backward. Certainly not forward.