Last week, the hated IDF unit, Duvdevan, performed yet another of its nightly raids in the Palestinian refugee camp al-Am’ari outside Ramallah. It was searching for a Palestinian suspect. It’s not known whether it apprehended the suspect, who he was, or what he was suspected of. Palestinian villagers hate these nighttime raids in which their fellow residents are kidnapped, dragged for questioning, and often imprisoned for months or years either without charges or on trumped-up charges. Duvdevan personnel in particular often disguise themselves as mistarvim (dress as local Palestinians) to arrest and even assassinate targets. That’s why local residents engage in acts of resistance, including rock throwing, at the unwelcome Israeli troops. 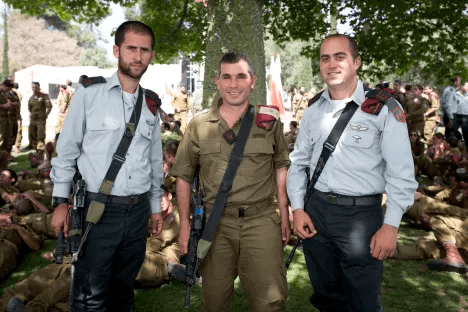 That is how Sgt. Ronen Lubarski met his end. He was patrolling the streets of the village during the raid. A Palestinian standing on a roof dropped a large rock slab which hit him on the head. Despite the protective gear he was wearing, he was mortally wounded and died yesterday in the hospital. The IDF conducted a funeral honoring the officer at Mt. Herzl, where he will be buried along with all soldiers who die in the line of duty.

But Kan, in covering the funeral, reported that Lubarksi’s superior officer, the commander of Duvdevan, eulogized him:

The team commander gave you a pin as a token of his appreciation for your work. You were the tip of the spear of the State of Israel [protecting] against unceasing terror in “Judea and Samaria.” Yours was a hero’s death in this operation protecting the State of Israel.

There was little new or of particular interest in his words. But what was interesting was that the media outlet reported his name, Lt. Col. Ami Biton. Apparently, Kan didn’t ask the military censor for permission to name him and the censor hasn’t yet discovered this oversight. Due to fear of war crimes prosecutions, Israeli media are not allowed to identify by name senior officers (except those at the very top of the command structure). But I am pleased to do that here in the interests of furthering the Israeli public’s right to know regarding such important matters.

Further, Avigdor Lieberman has introduced a bill which would criminalize even publishing the picture of an active duty officer. Though the bill hasn’t yet made its way into law, I’m happy to say that I’m doing my part to uphold the principle of transparency by featuring Biton’s photograph here. If officers engage in war crimes in the name of their country, their names and faces should be known. That is a principle that may or may not apply to Lt. Col. Biton. But it should definitely apply to all IDF senior officers since so many of them do commit war crimes in pursuit of their military objectives.

Richard, thanks for sharing. I noted 1 small oddity:
I have an RSS feed for your site, and in my RSS reader it says that Makor Rishon covered the funeral of Lubarski, whereas on your webpage it only mentions Kan.

@Paranam: I originally mistakenly credited Makor Rishon as the source, corrected it to note that Kan is the right one.

The rank is Lt. Col. not Lt. General. The only Lt. General in the IDF is the chief of staff.

@ shai: Right. I corrected a few of those errors last night & neglected one till just now.

thank you for publishing this information.