NOTE: I’ve published a new piece for The New Arab on Ben & Jerrys and the “ice cream war” fought by the progressive US company against the anti-BDS lobby.  Please give it a read. 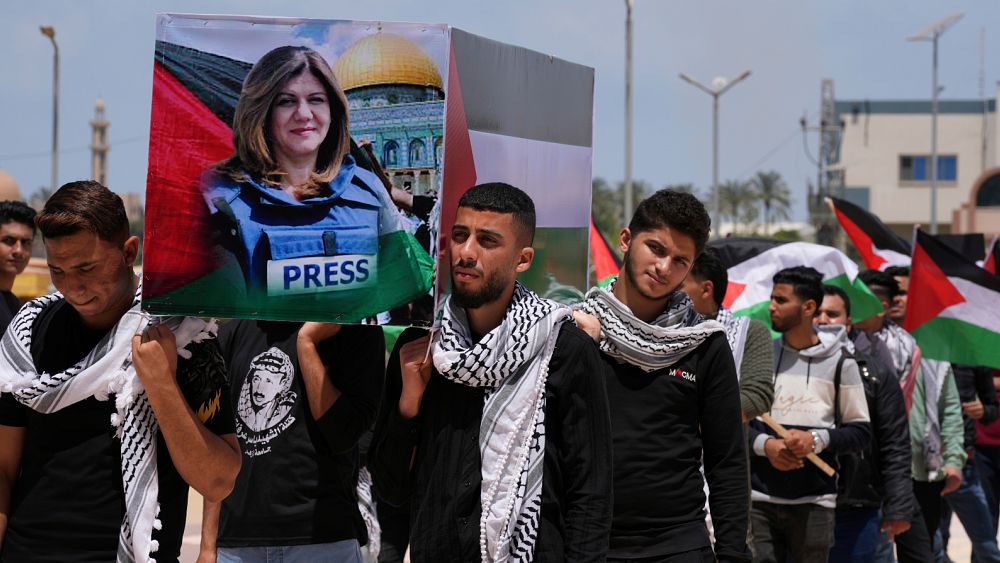 Those of you who’ve read this blog for some time will know that I’ve covered more stories that elicit howling outrage than I can count.  So many that are so depraved that it tears at the heart.  The murder of Shireen Abu Aqleh is one of those.

As if her murder wasn’t horrible enough, the aftermath has been, if possible, even worse.  First, there was the funeral in which Israeli Border Police assaulted the mourners and casket-bearers, causing a riot, and nearly causing the pall-earers to drop her casket.  Then, her family members, in the midst of mourning were summoned for interrogation as if they were the murderers.  After that, the Israeli cover-up, though expected, strained credulity.  It was so feeble, though presented with such smug certainty, that it alternately embarrassed and enraged:  She was killed by Palestinian gunmen.  Then she was killed in the midst of a shootout between Palestinian militants and the IDF.  Finally, she may have been killed by the IDF, but it was a bullet that ricocheted and struck her.

Despite intensive, painstaking forensic investigations by Bellingcat, the Washington Post, Al Jazeera and CNN, which examined audio, video, acoustic and ballistic evidence, along with eyewitness accounts, Israel stolidly maintained its innocence.  It reminds me of the dopey suspect who tells the cops: “That’s my story and I’m sticking to it!”

Then there were the dueling investigations, with the PA demanding an independent, transparent investigation; and Israel conditioning any investigation on the Palestinians handing over the murder bullet. To which the latter responded with something like: “you’re out of your f*g mind.”  Despite Abu Aqleh being a US citizen, the State Department sought to distance itself from the whole thing. It urged the Israelis and Palestinians to conduct a joint investigation.  That’s like a judge telling a mobster and the police to jointly investigate a mob hit.

Ned Price: “And now I will proceed to stuff this rabbit back into my hat. But don’t anyone look.”

Somehow, the US persuaded the PA to hand over the bullet for forensic examination.  Israeli officials promptly bragged that not only did they have the bullet itself, but that American officials gave it to them.  It’s the Israeli way to stab you and then twist the handle just to add to your suffering.

No sooner did this nonsense hit the news, than the State Department itself plumbed the depths of duplicity.  After a “detailed independent” investigation conducted by unnamed “experts,” the best Biden’s hirelings could come up with was: Israel probably killed her:

After an extremely detailed forensic analysis, independent, third-party examiners, as part of a process overseen by the U.S. Security Coordinator (USSC), could not reach a definitive conclusion regarding the origin of the bullet that killed Palestinian-American journalist Shireen Abu Akleh. Ballistic experts determined the bullet was badly damaged, which prevented a clear conclusion.

…By summarizing both [Israeli and Palestinian] investigations, the USSC concluded that gunfire from IDF positions was likely responsible for the death of Shireen Abu Akleh.  The USSC found no reason to believe that this was intentional but rather the result of tragic circumstances during an IDF-led military operation against factions of Palestinian Islamic Jihad on May 11, 2022, in Jenin, which followed a series of terrorist attacks in Israel.

The United States appreciates and continues to encourage cooperation between Israel and the PA in this important case. We will remain engaged with Israel and the PA on next steps and urge accountability. We again offer our deepest condolences to the Abu Akleh family.

What a pack of lies!  Isn’t it convenient that the bullet that could prove not only that the IDF murdered her, but could lead to the actual IDF sniper who fired the shot, was “badly damaged?”  State Department spokesperson, Ned Price, is a magician who desperately does not want the rabbit to jump out of his hat.  Instead, he tries to stuff it back into the hat before anyone has a chance to see it.  Words like “circus,” “charade,” and “pack of lies” come to mind.

Despite this whitewash, Israeli officials were outraged with even the vague claim in the statement that the IDF was “likely responsible” for her death.  Not murdered mind you, despite the multiple investigations mentioned above which concluded just that.  She somehow died.  No one knows exactly how or why.  Maybe she shot herself with a gun she wrestled out of the hands of an IDF sniper.

This Israeli reaction to the US statement deserves to be in the Chutzpah Hall of Fame:

“We told the U.S. that if the test is inconclusive then the statement should be inconclusive,” a senior Israeli official told me.

For “inconclusive” read empty, opaque, vague to the point of meaninglessness.  Those are some of the phrases that come to mind.  Israel would have preferred the statement to be a blank page.

The crowning act of this whole charade is Gideon Levy’s column in today’s Haaretz.  The print edition headline (see screenshot) pretty much says it all: “America, you should be ashamed of yourself!”  The online version is sanitized: “Abu Aqleh died, and with her the last remnants of trust in America.” The English edition headline is even worse: “Abu Akleh Affair Proves the U.S. Will Do Anything to Defend Israel.”  Despite Haaretz being the most liberal daily in Israel, even it blanches in the face of Israeli army criminality.  It offers an unfiltered version to print readers.  But progressively bowdlerizes it till it bears no resemblance to the original.

Levy offers a thundering denunciation of US connivance with Israel to get it off the moral hook:

It’s difficult to imagine a more clumsy, unprofessional, ridiculous and even insulting mobilization in the service of Israeli propaganda. Once again it has been proven that America is willing to do anything, absolutely anything, to protect its precious darling; to conceal all its crimes, to make itself an object of ridicule, to disregard moral, legal and professional standards – all to cover up for Israel. America is telling Israel: Keep on killing journalists, as far as we’re concerned it’s fine. We will always say you didn’t mean to, that tragic circumstances killed Abu Akleh and not soldiers in the Duvdevan counterterrorism unit.

The Haaretz columnist also sketches a scenario in which Israel’s most celebrated investigative journalist, Ilana Dayan, decides to cover the Occupation.  In the course of her visit, a Palestinian militant shoots her to death.  He imagines thousands of soldiers flooding the West Bank, hunting down the killer and his terror cell.  And all of Israel mourning her as if she were their own child.  Levy’s purpose, of course, is to point out the hypocrisy of Israel’s response to the Abu Aqleh killing; and the hypocrisy, even moral depravity of it.

But it’s even more tragic to think that neither Ilana Dayan nor any Israeli reporter would deign to cover the skirmishes which brought Abu Aqleh to Jenin that day.  No Israeli newspaper would even whisper a word about such an operation.  It would be inconsequential.  Not worth even a drop of printer’s ink.  If no Israeli journalist cares about covering the atrocities of Israeli Occupation, then why would anyone care about Abu Aqleh’s murder?

She was wearing a helmet and flak jacket, but she was struck in the head. I rather doubt that this killing was ‘unintentional’. Someone needs to be held accountable.

@Judah: She was actually struck in the neck just between the flak jacket and her helmet. I call it a sniper’s “kill shot.”

The statement of the US is shameful. It has already been shown that there were a number of bullets behind Shireen in a tree. That wouldn’t have been the act of a random gunman. It was so clearly an assassination that this beggars belief.

And what of the video footage of the Israelis. Did the US ask for that? Of course not.

Shameful but why expect anything else?

RE: “Despite this whitewash, Israeli officials were outraged with even the vague claim in the statement that the IDF was ‘likely responsible’ for her death.” ~ R.S.
SEE: An Israeli bullet killed Shireen. Denial is the army’s time-tested strategy | By John Brown | +972 Magazine | July 5, 2022
Israel’s attempts to deny responsibility for Abu Akleh’s death is part of its long-standing policy of obfuscating investigations into Palestinian killings.
LINK – https://www.972mag.com/shireen-bullets-army-investigation/

Not a day goes by without a Palestinian dying at the hands of the most moral army . Not any different from a regular u.s cops shooting 60 times a black man . Not an eyelash batted not here nor there

Republicans are as vanguardists as any regular haredi 99 year old Rabi that cannot differentiate between a woman and a mule. democrats have zero back bone just like any other gantz. . All those have their snouts in aipac trough the same one who equates bds and antisemitism
WHAT ELSE DO YOU EXPECT
as long as the shwartzmans and adelsins jeep dictating expect roe to be just the No1 to fall by the wayside just as that mysterious bullet. Maybe it was the same bullet that killed Kennedy. Look for a zaprunder film

Mr Richard accept my apologies for this post , but i gotta get it off my chest
WHY IS THE US GOING THRU HYPER INFLATION – supposed pundits parse lies to misdirect the truth
the truth – all companies that got huge free loans from mr powell in 2021, instead of investing into the corp for the future hyper demand which they knew, decided instead to give it to the rich, dividends buybacks, and as they forecasted the demand now they have the excuse to soak the poor even more to keep shuffling higher profits that benefits who , well same old rich that got dividends and buybacks. meanwhile workers got shafted both here and in china the source of most inventories.
meanwhile the dow jumped40% between late 20 and 21 – hail to capitalism

“If no Israeli journalist cares about covering the atrocities of Israeli Occupation, then why would anyone care about Abu Aqleh’s murder?”

If Israel doesn’t care about Tikkun Olam why should anyone care about Israel?