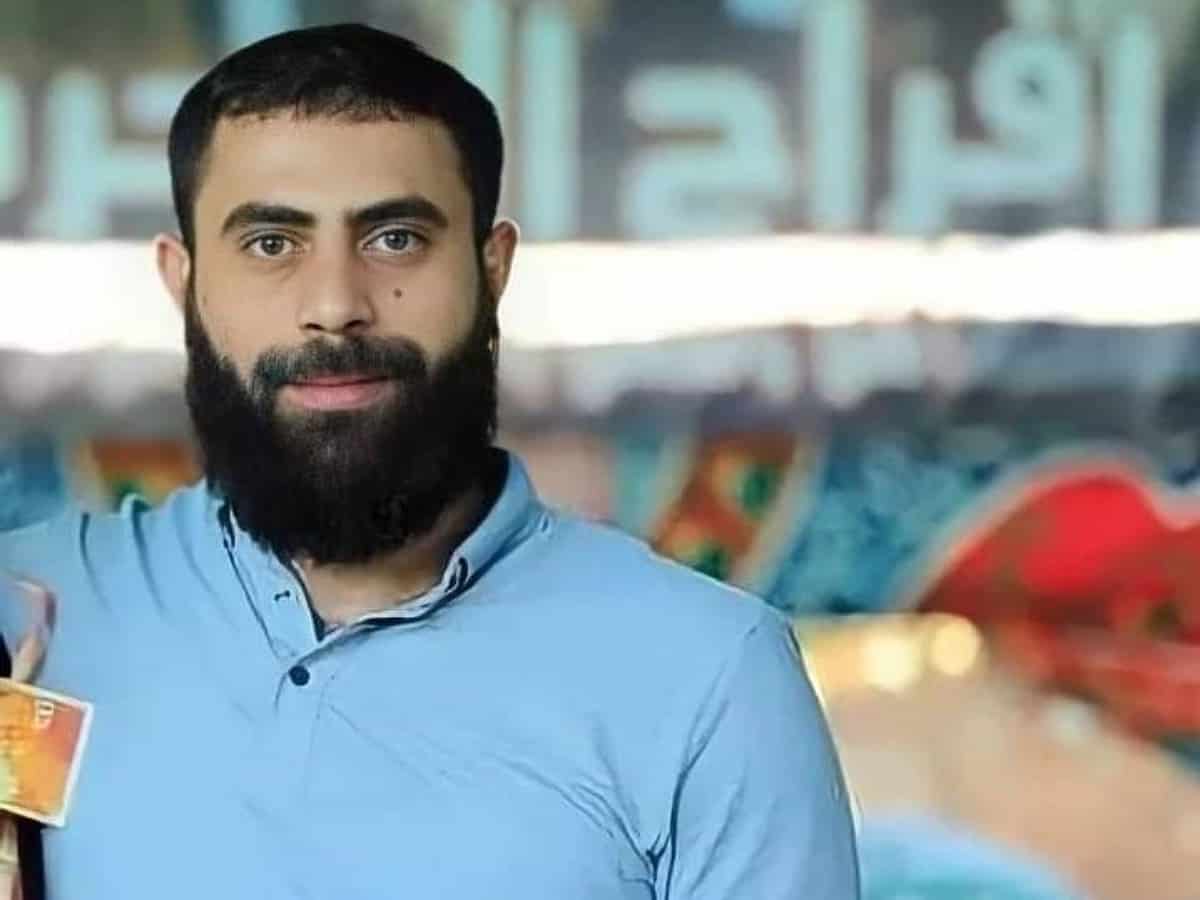 There have been two tragic, horrifying incidents of Judeo-terrorism in the past few days.  The first was the stabbing murder of Ali Hassan Harb by an Israeli settler in the village of Iskaka close to the town of Salfit.  He was a 27-year-old electrical engineer who’d graduated three years earlier.  In his spare time, he liked to help out with his family’s agricultural work.

The tragedy began with settlers from nearby Ariel building a tin-roofed shack (some reports say it was a tent) on village agricultural land.  Their intent was to stake a claim to the land and expand the territory they’ve already stolen from Palestinian farmers like those in Salfit.  This is the step-by-step process by which settlers claim, occupy then steal the Palestinian legacy.

This is the account published by the Palestinian Center for Human Rights (PCHR):

According to [an] investigation conducted PCHR, at approximately 17:30 on Tuesday, 21 June 2022, an Israeli settler stabbed…Ali Hasan Harb (27) in the chest when the latter was on his land with relatives. They went to the farmland upon getting a phone call from villagers, informing them that Israeli settlers built a tin-plated shack on their land. The stabbing happened in the presence and under the protection of IOF, who prevented medical aid to Harb and left him to bleed to death.

“We were informed that Israeli settlers are setting up a building on our land, that is 2km from where we live in Iskaka village. My father, my relatives and I immediately headed to the land and saw the settlers escaping the area. A Few minutes later, the settlers returned with the settlement’s security and IOF.  The settlement security guard fired several bullets in the air.

Suddenly, while we were standing, a settler pulled a knife and stabbed my nephew, ‘Ali Hasan Harb, who was standing next to us and doing nothing, as it was very calm at the time. ‘Ali fell on the ground and we tried to approach and help him, but the IOF prevented us. My son approached him, because he was bleeding.  A soldier pointed his gun at my son’s head and shouted for him to stop.

Afterwards, clashes erupted with the Israeli soldiers for preventing us from giving Harb aid, but they insisted on preventing any first aid and leaving him to bleed to death in front of our eyes. We couldn’t do anything. He was left to bleed for more than half an hour.

After that, an Israeli officer said: we will try to save him. We then took him and rushed to Yasser Arafat Governmental Hospital, where he was pronounced dead, after succumbing to his wounds.”

This tweet from a Haaretz reporter indicates that the authorities who accompanied the killer to the site of the altercation were regional police, not soldiers.  The Hebrew says that police denied any officers were at the scene.  However, the image above clearly shows police personnel at the scene.  After she showed the image to the police, they refused to answer any further questions, saying there was a gag order preventing publication of anything about the investigation.

Oren Ziv, writing in 972, offers this eyewitness account of the killing, in which he says there were soldiers and police at the scene:

One of the older settlers — who was wearing a black shirt, military trousers, and a hat — approached and threw stones at us. He then swung a knife and tried to stab me. I pushed him and then he pounced and stabbed Ali near his heart. The police and army were just a few meters away from us, but they did not do a thing to the stabber.

Ziv has also seen a picture of the killer taken by one the witnesses:

While the police initially said that they could not identify the attacker, eyewitnesses presented Local Call with a photo from the stabbing that included an image of the attacker. The image showed an adult male who came to the area with the group of 10-15 teenagers and a number of other adults. On Wednesday afternoon, Israeli police arrested a Jewish man on suspicion of being involved in the killing after he arrived at the Ariel police station on his own initiative.

If anyone reading this can help find that image, identify the murder suspect, or contact anyone with further information about the incident, please use the “Contact” button in the upper navigation bar to reach me. Informaton provided will be held in strictest confidence.

The following law enforcement statement is infuriating in its bowdlerization of reality and the actual facts of the murder. The deliberate linguistic obfuscation is yet another example of a state steeped, not just in denial, but in facilitating acts of Jewish terrorism:

Israeli police…said they have launched an investigation into the killing. They confirmed that a Palestinian man had been stabbed but claimed it was unclear who had carried out the attack.

“Police forces arrived at the scene from which a wounded Palestinian man was evacuated in a serious condition, apparently from a stab wound,” police said, citing medics….

“At this stage the identity of the stabber is unclear,” police said. No arrests were immediately made.

This tragedy is emblematic of the downhill slide to outright terrorism not just of the settlers themselves, but of the entire state.  It’s one thing if a random settler commits an act of violence.  But when the entire apparatus of the state is mobilized to protect the murderers, then Israel itself has become a terror state.

Harb’s funeral was held earlier today.  The video above shows his body lifted aloft just as Shireen Abu-Aqleh’s was last week, as mourners proceeded to the cemetery waving Palestinian and PFLP flags as they walked.

A source told me there is an active investigation.  I am trying to identify the murderer.  If you have any information, please contact me. 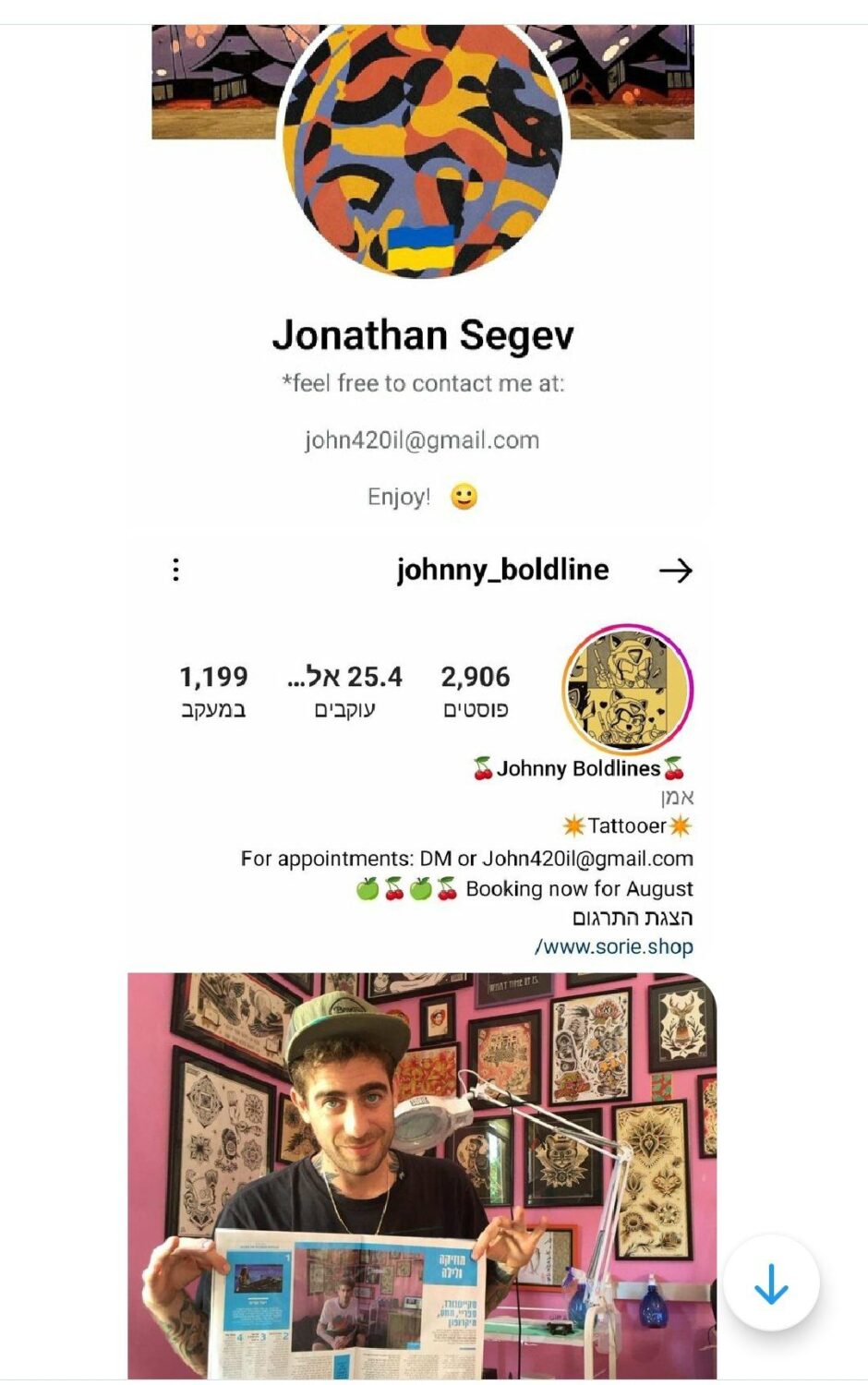 The second incident happened in Tel Aviv.  After a peace demonstration by Israelis ended, the protestors prepared to disperse.  A group of friends was taking photos of themselves carrying Palestinian flags.  As they did, a man on a motorscooter approached them and drove directly into the crowd, shouting “Death to Arabs.”

“The rally was over, we wanted to head to the bus, and we stopped to take a picture,” Rose [a victim] said. “There was a guy with an electric scooter standing and looking at us all the time. I don’t remember everything he said to us, but I did hear him say: ‘Death to the Arabs.’ Suddenly I was hit in the back and fell down.”

Two Israeli Palestinian sisters were seriously injured and taken to hospital.  The attacker had earlier approached Jewish protestors and displayed anger.  They feared he might attack them.  But then he saw the Palestinian flags and thought, “Arabs,” as so many Israelis do.  That’s when he saw “red” and attacked.

A Jewish man came, cursed us and left. Suddenly he came back on an electric scooter and ran into [them]. It had to be intentional. I ran after him and caught him. I reported it to the police with two other people, but I understood that there was no point. They let him go.” 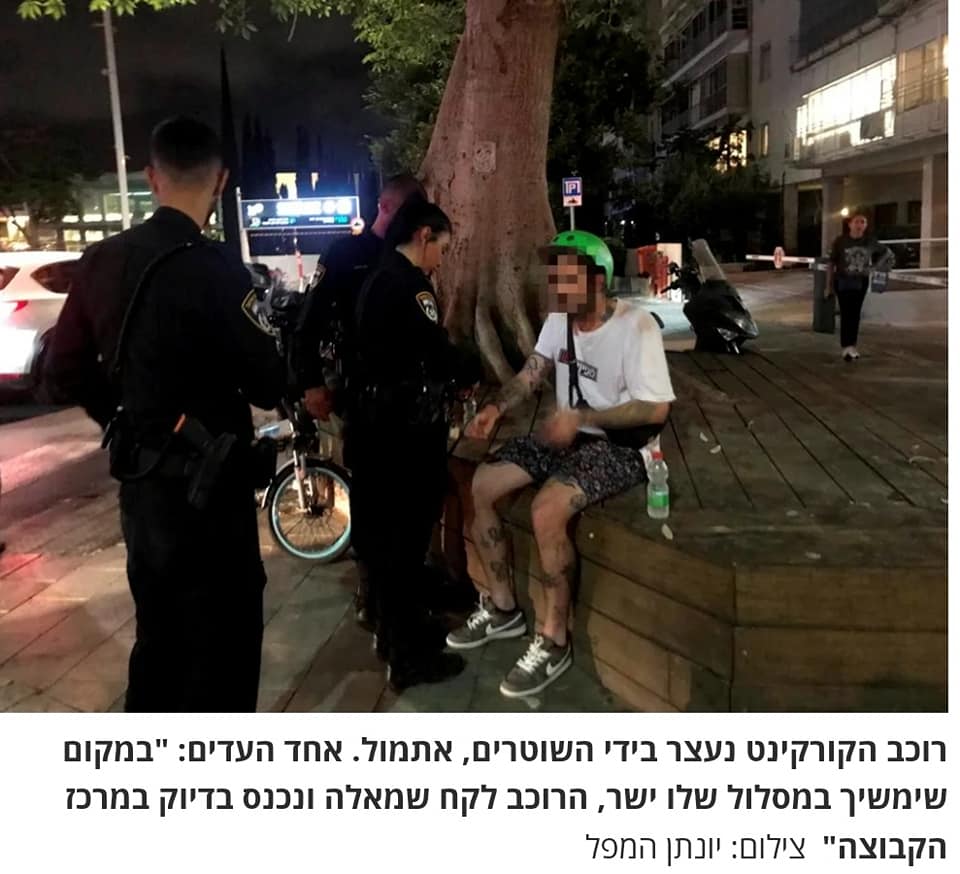 The suspect detained by police. Note the tattoos on both his arms and legs (click to enlarge)

When police came they detained him and he made a statement that he drove into the crowd “unintentionally.”  It’s bad enough when a terrorist admits what he’s done and why.  But when a terrorist doesn’t even have the courage of his convictions, it’s beyond infuriating.  The police, as one would expect, let him go.  He still has not been arrested.

No Israeli publication has identified the suspect.  But Israeli activists have provided documentary evidence to me.  He is Jonathan Segev, age 36, a graffiti artist and skateboarder from Tel Aviv.  His social media accounts portray a gifted artist and adept skateboarder.  He even sells merch via an online store and features a peace symbol in a graffiti mural he did for a local hotel.  I managed to find no political content at all in his various timelines. 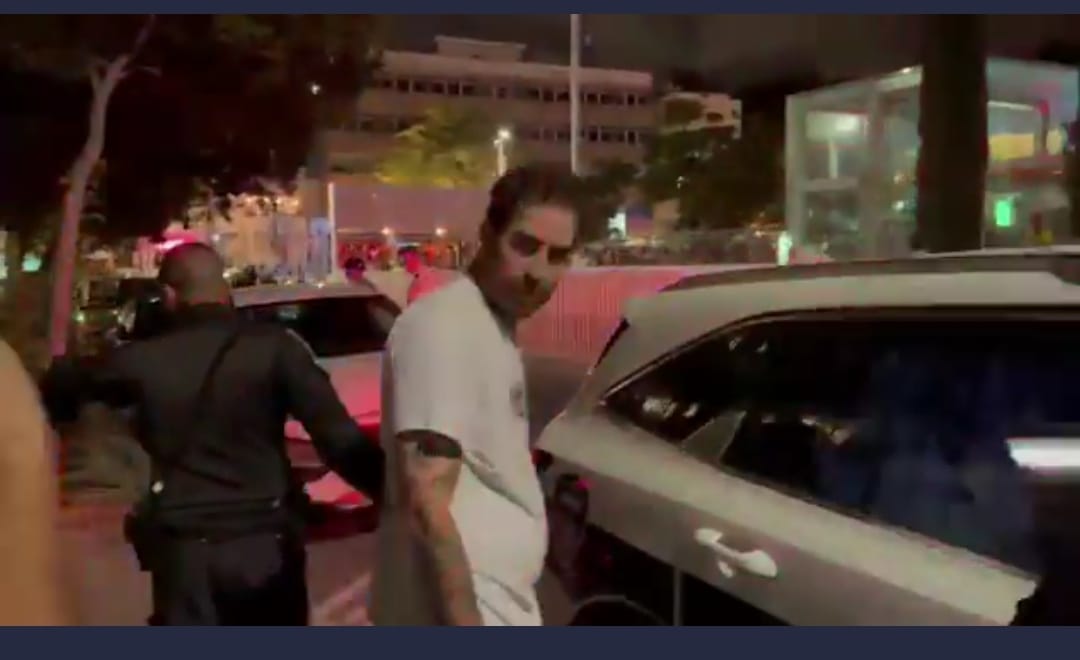 This image displays the tattoos on his arms (click to enlarge)

For a time, I even doubted the identification was correct given how impressive Segev’s work was.  But I compared profile pictures of him with tattoos up and down his arm, with an image of the suspect at the scene of the crime.  There is no doubt that he is Segev.  Though the image blurs his face, his tattoos are clearly visible on his arm.  The headline of a TimeOut profile of Segev might have alerted me to some mental health issues: “Instead of going to a therapist, I rap.” 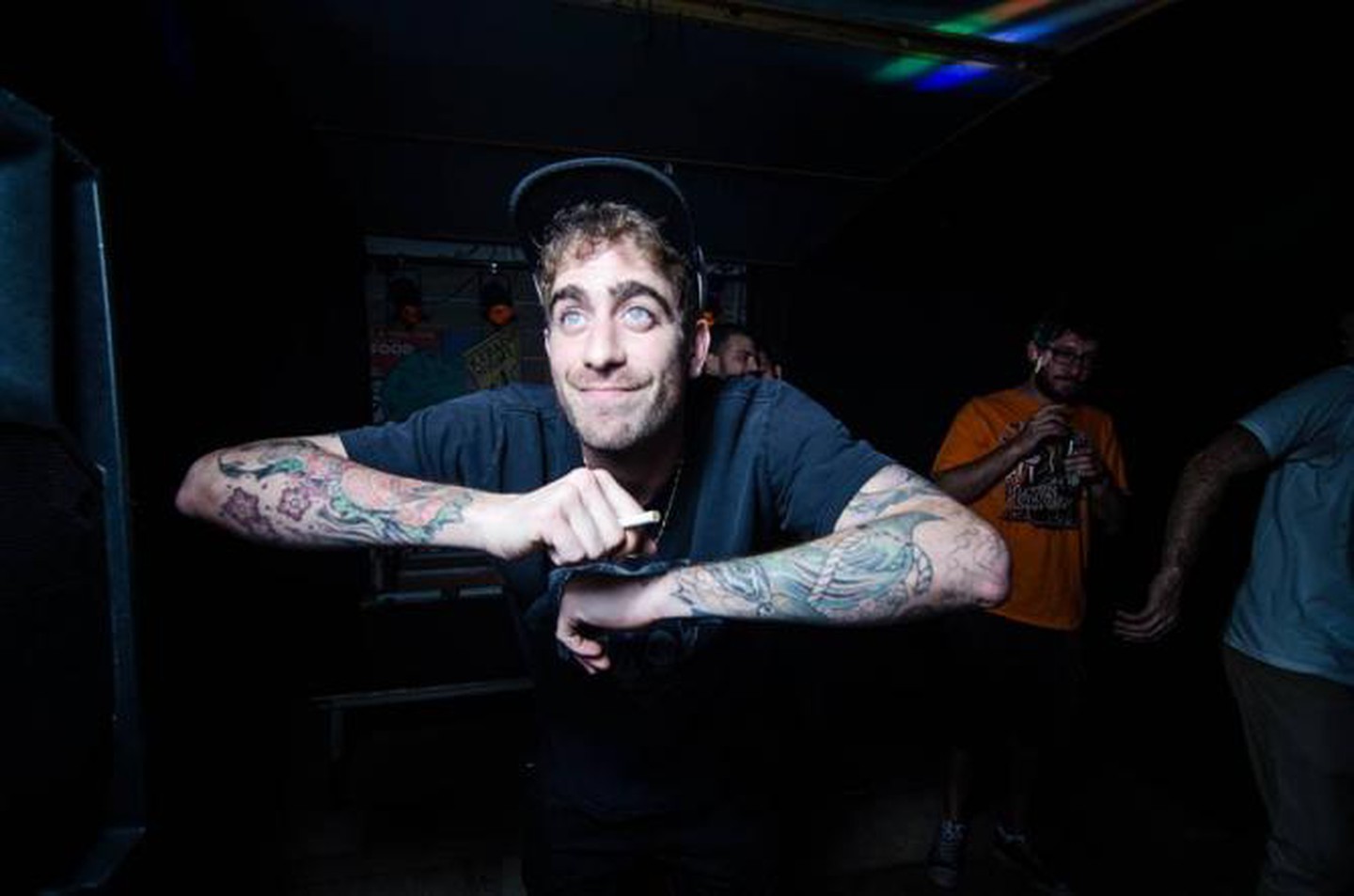 How does an Israeli embracing the hip hop, hipster skateboard outlaw culture become a Judeo-terrorist?  It is much more common to see Israelis killing Palestinians than to see an Israeli seek to kill a fellow Israeli.  Of course, there is enormous hatred for leftists Jews and Israeli Palestinians among the majority of the country.

As I wrote above, Israeli police are not law enforcement authorities. They are accessories to terrorism.  They can’t or won’t investigate what is clearly a hate crime.  They can’t or won’t arrest the assailant.  But in light of the murder in the West Bank, this is no surprise.  There is terrorism in the West Bank against Palestinians and terrorism inside Israel itself against Israelis.  There is no clearer proof that Israel has become a terror state.

Have you ever called the terror act of Muslims a Islamo-Terror ?

@Ilan: I write about Israel and Jews. There are plenty of Islamophobes like you out there who get off on smearing Muslims. You don’t need me to do it. Not to mention that whatever acts of terror may be committed by MUslim fundamentlaists are dwarfed by terror attacks against Muslims by the US, Israel and other states.

Just a correction: the flags wawed at Ali Harb’s funeral are not the PFLP but the DFLP.

@Deir Yassin: Thanks for the correction. I was looking on the video at the letters on the flags, which were waving briskly. And I couldn’t see the lettering clearly.

It’s not that important, but at least they can not accuse him of being a “terrorist” as the DFLP is not on the ” terrorist” list as far as I know, contrary to the PFLP.
By the way, I think Haaretz has an article up now on the settler being arrested/interrogated.

Renminds me of Monty Python’s movie Life of Brian – spliters

That anything here reminds you of a comedy says quite a lot about you…..

“On Wednesday afternoon, Israeli police arrested a Jewish man on suspicion of being involved in the killing after he arrived at the Ariel police station on his own initiative.”
https://www.972mag.com/settler-stabbing-palestinian-soldiers/

Okay, so an investigation by the police into this murder is underway.
An arrest suggests that the Jewish man involved in the killing had turned himself in.

Last edited 7 months ago by Judah
0

@Judah: Read my new post in which I identify him