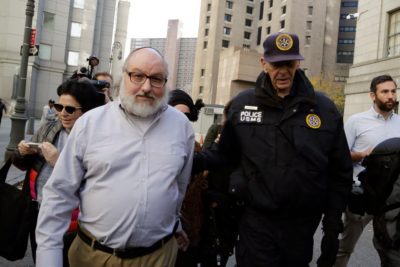 Pollard on his release from federal prison

If Israeli security journalist Yossi Melman is correct, Pres. Trump’s Department of Justice is expected this week to remove all parole restrictions on ex-Israeli spy, Jonathan Pollard. Pollard served 30 years in prison and was freed conditionally in 2015.  The Justice Department restricted him to living in New York City and not leaving the U.S.  This prohibited him from his goal of moving to Israel, where the far-right Likud government could be expected to lionize him for his betrayal (of U.S. interests).

On Friday, those restrictions expire.  Melman posted a series of tweets explaining that he queried DOJ about whether they might be extended and the response he received was that there was no expectation they would be.

Melman also noted that Pollard’s lawyer, accused pedophile Alan Dershowitz, told the reporter that he was cautiously optimistic that Pollard would be free on Friday and leave for Israel soon.

This will end a decades-long saga which found Pollard to be one of the most damaging Spies in U.S. history.  He sold U.S. Navy top secret plans to the Israelis who, in turn, exchanged them with the Soviets to barter for the release of Soviet Jewish dissidents.

Officials in the Reagan administration felt so betrayed by Israeli promises that they would not spy on their chief ally, that they insisted on prosecuting Pollard under charges that brought a conviction and life sentence.  He spent three decades in prison during which both Bill Clinton and George Bush refused to commute his sentence despite enormous pressure applied by the Israeli government and its domestic agents, the Israel Lobby. The U.S. Intelligence apparatus was adamant that Pollard’s crimes never be mitigated.  CIA director George Tenet even threatened to resign if Clinton commuted Pollard’s sentence.  After his release, the former spy spent several years living under parole restrictions.

It will also offer Israel a green light to continue and intensify its ongoing intelligence operations against this country, realizing that no matter what happens Israel can manipulate the U.S. and mitigate whatever punishments are involved.  These operations, as Melman notes began in 1948 and continue to this day.  They included the theft of enriched uranium from a U.S. storage facility in a plot devised by then Israeli-spy (now Hollywood producer), Arnon Milchan.

The freeing of Pollard would mark yet another betrayal by this administration of its intelligence services. Trump has spent the past four years braying at the FBI, CIA and NSA, complaining that they refuse to be pliant to his demands. He has run through multiple directors of each of these agencies who’ve fallen afoul of him.  This is yet another way in which he can humiliate them and their interests.

Finally, the Pollard case buttresses arguments of anti-Semites who claim that American Jews harbor a dual loyalty conflict between the interests of Israel and the U.S.  In fact, in cases like this some Jews like Pollard choose the interests of Israel above those of America.  They may somehow justify to themselves that those interests are the same, but they’re not.  And a life sentence for betraying U.S. intelligence secrets should bring that home.  But what Israel did in running Pollard seriously endangered American Jews.  There is absolutely no evidence that Israel understands this or even cares.  And that is offensive and a schandeh.

Thx for excellent coverage through the years. Personally I consider 30 years a life sentence and many others who are complicit get off scotch free.

I thought Milchan was involved in …

“Most Damaging Spy Operation In US History”.

Really? Says who? You and Cap Weinberger.

Weinberger, who was infamously indicted on five counts of perjury for his role in the Iran- Contra scandal, and subsequently pardoned..

@ Wunsch: Not only Weinberger. George Schultz also opposed it as did his entire national security team. Regardless of Weinberger’s past, as defense secretary he was in a far better position to know the damage that Pollard did than you are. George Tenet, Obama’s CIA threatened to quit if Pollard was freed. Tenet was never charged or convicted of any crime. How ya gonna discredit him?

Trash and burn before you leave!

Dershowitz was never accused of pedophilia.

@ Lisa Huges: Now we’re getting into the ‘finer points’ of sex crimes, aren’t we? I understand as a journalist you’re trying to be precise.

But Virginia Giuffre was 16 and a minor when Epstein pimped her out to Dershowitz (according to Giuffre herself). That’s statutory rape btw. Oh and let’s not forget that D. argued in an op-ed that the age of consent should be lowered to 15. Which would be mighty convenient for him if Giuffre’s charges are true and relieve him of the charge of statutory rape.

If you want to quibble about the definition of pedophilia and claim Dershowitz didn’t commit it because Giuffre was pre-pubescent, well be my guest. Still a pretty thin reed you have D. clinging to.

To be precise, we can call him an ephebophile, an adult who has sex with adolescents aged 15-19. But it’s still illegal with a 16 year old. Does that make it any better?

“Not only Weinberger. George Schultz also opposed it as did his entire national security team”

‘It is safe to say that these gentlemen know more than anyone about Pollard’s conduct. The fact that they have come out in favor of clemency speaks volumes. Other distinguished Americans have come out publicly in favor of clemency, including former Secretary of State Henry Kissinger, former Attorney General Michael Mukasey, former Vice President Dan Quayle, former CIA Director James Woolsey, former Senate Intelligence Committee Chairman Dennis DeConcini, dozens of members of Congress and many others.’

@ Wunsch: In 1985, all of the figures you mention above adamantly opposed any sort of clemency and lobbied for charges punishable by a life sentence, which is what he was convicted of.

Secretary of Defense Don Rumsfeld, who was in government at the time, opposed clemency as did George Tenet, CIA chief. Unlike the ones you mention, who had long left government service, Tenet & Rumsfeld advocated the same position your figures did when they were in government.

Those you mention tied themselves closely to the Israel Lobby when they advocated for clemency. In fact, I’m fairly certain many of them were paid for their advocacy. Though we can never know that since none of them registered as agents of Israel (who helped orchestrate this campaign) or the Lobby. They were no longer independent.

Saying about any man or action “Most Damaging Spy Operation in U.S. History” is a big hill to climb and proof. One or 10 man saying so does not prove anything, it gives the opinion or a few indiviual as high ranked as may be.
I would assume stealing for nuclear secrets of the US by the soviets would be consider by some as a greater damage to whatever Polard has stolen.

Progressives like to talk about him only b/c of the Israeli connection. It is so obvious I could hand you, your opinion before you spelled it out.

@ Ariel: Here is the then US defense secretary:

It is difficult for me, even in the so-called ‘year of the spy,’” wrote Weinberger, “to conceive of a greater harm to national security than that caused by the defendant in view of the breadth, the critical importance to the U.S., and the high sensitivity of the information he sold to Israel. That information was intentionally reserved by the United States for its own use, because to disclose it, to anyone or any nation, would cause the greatest harm to our national security.”

Further, Pollard did in effect steal for the Soviets since they were the ultimate recipient of those top secret documents he stole. He also offered documents to numerous other countries, which refused them.

Of course Pollard is spoken of because of the “Israeli connection.” That’s who he stole for. If he stole for the UK or France and expressed his admiration and devotion to them as he did to Israel, he would be known for that. But he didn’t.

By your innuendo, some of the names I mentioned must have been bought by Lobby money.

But if you actually get around to naming names, please don’t include George Shultz, who began to pivot toward Israel in the mid-1980’s while he was still active in government and involved in Middle East affairs.

Can I continue? You haven’t cut me off yet..

some of the names I mentioned must have been bought by Lobby money.

Oh I’m sure all of them were bought in some manner or other by the Lobby. Most of them are now high-priced consultants, lobbyists or lawyers. They know how to earn their pay and who has the money to pay them.

No more posts in this thread.

Robert “Bud” McFarlane, Ronald Reagan’s national security adviser at the time, who wrote to President Barack Obama on behalf of Pollard, saying that Weinberger had a history of “unbalanced reasoning” when it came to Israel.

@Oui: By my definition, Ronald Reagan and most of those serving him, including McFarlane, were “imbalanced.”

Reply to RS:
See link, Bud McFarlane ran Oliver North in the Irangate scandal and played a role in the bloody wars in the America’s in support of dictators. Much easier than handling democracies … capitalism loves Trump’s 2nd term … following the 1876 election strategy. Worst of the worse.

Weinberger was attacked with accusations of “anti-semitism” … if one doesn’t swear loyality to the fascist state?

The benefit [?] of leaving the post-Pollard era of mistrust behind.

Who pulled the trigger and who did the preliminary spying in each case may have had more to do with wanting to take credit or avoid credit based on geopolitical considerations.

But the two sides were working together on operations in real-time with major strategic implications.

as usual israel is the golden hideaway of humanities garbage such as this crap and others type of leviev, crazy… and not to mention our jewel pedophile .
and to do that aipac extracts the yearly blackmail