Seattle voters put Amazon on a crash diet after the company spent $1.5-million to defeat socialist City Council candidate, Kshama Sawant, who was running for a third term.  In addition to the Amazon funds, a Big Business PAC spent another half-million to defeat her.  On Election Night, she trailed by 8 points. A day later, after later vote tallies, she trailed by 2 points.  Earlier today, she took the lead for the first time–by 500 votes. 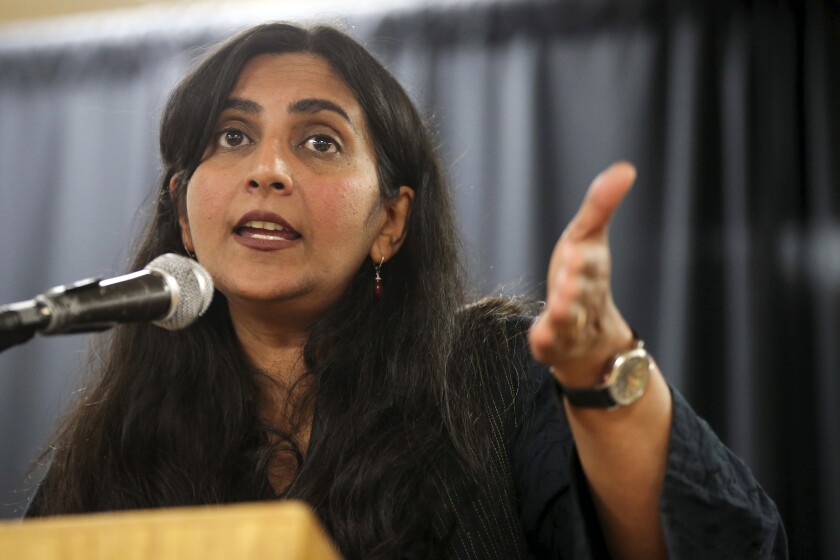 Seattle business interests are angry at the progressive-dominated City Council which has adopted a $15 minimum wage, rent control, and initially adopted an employee tax of $750 per head to fund affordable housing.  After Amazon gave the mayor a major tongue-lashing she jawboned the Council, which reversed itself.  There were only two votes against retaining the tax, one of them Sawant’s.  At that point Amazon, which would have paid the most into the housing fund due to its major expansion, decided Sawant was its mortal enemy.

Big Business wasn’t focussed solely on eliminating Sawant. They spent a million dollars overall on seven Council races.  Their candidates won only two of the seven races.  You would think that the corporate interests would try to figure out how they could be cooperative, responsible citizens, instead of trying to buy the Council.

What does $1.5-million buy these days in a city election?  Scores of glossy, full-color mailers (see slideshow) filled with lies, distortions, red-baiting and misogyny.  I’m featuring a few of the mailers I received in the weeks leading up to the election.

The corporate interests aligned against her were a combination of Amazon, which is in the midst of adding 50,000 new employees to its Seattle footprint, Paul Allen’s real estate development company, Vulcan, the Hyatt hotel chain, and Expedia.

I hesitate to create a national trend out of a local election.  But this election indicates that the traditional corporate interests of Democratic politics are giving way to the populist interests represented by candidates like Warren and Sanders.

Mike Bloomberg’s entry into the presidential race today seems an almost direct reaction to the rise of democratic socialism in the party.  Clearly, his main motivation is to enter as the antithesis of the Sanders-Warren wealth tax and Medicare for All proposals, which are largely financed by modest taxes on the wealth of his fellow billionaires.

Among the lies Egan Orion spread in his campaign literature were that he refused corporate campaign contributions and “spoke out against outrageous spending by outside PACs.”  He even falsely bragged that 90% of his donations came from within the council district.  In fact, he could bellyache all he wanted, but those PACs and corporate donations poured into his campaign.

Orion also red-baited Sawant with scare tactics dusted off from the 1950s:

“It is widely documented that Sawant’s office is governed by unaccountable Socialist Alternative members…who not only controls [sic] her vote, but hires and fires staff…”

The campaign mailers alluded darkly to Sawant’s “national ambitions” as if she were a Comintern member plotting to take over the U.S. government.

While it is true that Sawant has a troublesome reputation as a council member who goes her own way and often refuses to play the go-along-to-get-along politics of many local communities, painting her as a doctrinaire robot-like Bolshevik is the epitome of both red-baiting and misogyny.

Would I prefer she were more like AOC and less like a 1972 version of George McGovern?  Sure.  There is no doubt that creating coalitions accomplishes more than firebrand ideology.  But if Amazon wants to play hardball, then I have no problem supporting a council member who will respond in kind.

You must carefully read and respect the comment rules.  Your first comment is moderated and approved by author. Comments violating the rules will be deleted.
Subscribe
0 Comments
Inline Feedbacks
View all comments