Many years ago, I was researching the history of political assassinations within the Zionist movement for an essay which the London Review of Books commissioned (and then refused to publish). One of the intriguing murders was that of Chaim Arlosoroff in Tel Aviv in 1933. But it wasn’t just the circumstances of his killing and the fact that to this day there are disputes about who killed him and the motive that was most shocking: it was the strange trajectory of his early life in Germany before he made aliyah.

At the time of his assassination, he was one of the leading figures in the Yishuv, a senior member of Mapai (which became, in various permutations, the ruling Party for the first three decades of the State) and a trusted emissary to European governments. He was born in Poland in 1899, just as the first rumblings of European Zionism began. Fleeing the aftermath of the 1903 Kishniev pogrom, his family eventually moved to Konigsberg in eastern Germany and Arlosoroff studied at the University of Berlin. During this period he became an ardent Zionist and assumed an ever-larger role in the Zionist movement. 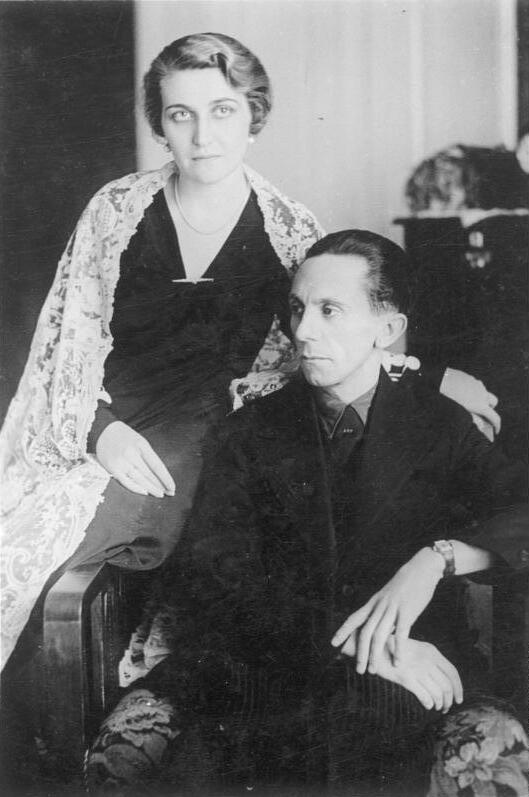 While at University he met a fellow student named Magda Friedlander. Neither of her biological parents was Jewish, and Magda was raised Catholic. But her mother remarried Richard Friedlander who, though an assimilated Jew, observed the major Jewish holidays. Magda was devoted to him and absorbed an appreciation for his Jewish heritage. Later, Friedlander appealed for his step-daughter’s help in escaping the Nazis. She ignored his pleas and he died in Buchenwald.

When she met Arlosoroff, many accounts say they began an affair and she became a devoted partner in his Zionist activism. She even wore a Star of David he gave her as a present. But Arlosoroff intended to make aliya after completing his studies, and Magda had no interest in leaving her homeland. So they eventually ended the relationship.

That’s when things got strange. According to some accounts, just before their relationship ended, relations between them became rocky. Friedlander had attended a Nazi rally and came under the spell of a then-unknown junior activist in the Nazi Party. She supposedly began an affair with Joseph Goebbels, which Arlosoroff discovered, and there was a climactic scene in which (again this is almost certainly apocryphal) her Jewish lover exploded in a fit of rage, took out a revolver and fired it at her.

Actually, the truth of the love affair and related circumstances are dramatic and strange enough, without needing enhancement by these likely embellished accounts.

It is beyond bizarre that one of the future leaders of the Yishuv had a love affair with a woman who became Goebbels’s mistress and later wife. By the way, her life ended miserably as she and Goebbels swallowed poison in the bunker with Hitler, along with six of their children.

Afterward, Arlosoroff became a key figure in negotiating with the Nazis on behalf of German Jewry. He signed the Haavara Agreement, by which about 60,000 German Jews escaped before the Holocaust. Their assets were confiscated and placed in a fund which was transferred by the Germans to Palestine. Some of the funds were returned to the refugees who settled in Palestine. But the majority were used by the Yishuv to buy German goods which were imported to the country.

This plan was deeply controversial for many reasons. Primarily, Zionists objected on principle to collaboration with the Nazis. But equally troubling was that the Haavara Agreement essentially destroyed what was becoming a powerful weapon against the Nazi regime: a world boycott organized by American Jews under the leadership of Rabbi Stephen Wise. This crusade drew the support of American Jewry and those opposed to Nazism both in the U.S. and abroad. It caused severe economic problems for the new Nazi government, which had plans to rearm itself and needed immense amounts of foreign cash and investment to do so.

Thus, Haavara served a critical role both in destroying the momentum of the boycott and offering the German economy a shot in the arm when it needed it the most.

Shortly after he returned from Europe to Palestine, he took his wife for a walk on the Tel Aviv beach on a Friday evening. They were accosted by two men who shot Arlosoroff, who later died of his wounds. The Yishuv later arrested two followers of Jabotinsky’s Revisionist movement and accused them of the murder. They offered a motive that the killers were angry at the victim’s role in collaborating with the Nazis and sought to sabotage his effort. None of the suspects were ever convicted of the murder.

There were, of course, other theories. Two Arabs originally arrested for the crime and said that they had killed Arlosoroff as part of a plan to rape his wife. But they later recanted and said they’d been paid by Revisionists to offer this account. A biographer of Friedlander even claimed that Goebbels ordered the killing because he didn’t wish the world to know about his wife’s “sordid Jewish past.”

The lesson to be learned from all this is how fluid politics were in this era before the Holocaust. In this period. a future Zionist leader could carry on a love affair with a German Catholic who eventually married the Nazi party’s chief propagandist. The Zionist movement, both its left and right-wing factions, could collaborate with the Nazis in attempts either to save German Jewry or insinuate themselves into the good graces of Hitler in the event of German victory in the War.

Only now, in hindsight, and when needing to excoriate dissident Jews critical of Israel’s drift toward religious supremacy and Nazi-style racial purity and ethnic cleansing, have pro-Israel apologists declared that Zionism never contemplated alliances with Nazism, and that the two always maintained an absolute separation. It is indeed shocking to think that those responsible for annihilating six-million European Jews could at one time have contemplated Palestine, rather than Auschwitz, as a solution for the “Jewish problem.” Though this is an inconvenient truth, it is the truth nevertheless.

Here is the ultimate shamelessness of the anti-Zionist Jew — berating a Palestinian who was shot during the Second Intifada, for engaging with an Israeli. I hope to see a large turnout for my NYC conversation with my friend Yousef Bashir on Nov. 7 at Park Avenue Synagogue, 7pm. https://t.co/T5VtmyokDQ

A few days ago I read that Yossi Klein Halevi planned a joint book tour with a Palestinian author. Klein Halevi, who is a former JDL leader, prides himself on organizing interfaith dialogue between Israelis and Muslims, whose goal is to advance understanding of Israel among the world’s Muslims. Essentially, his is a fairly sophisticated effort to normalize Zionism in the Arab and Muslim world. He’s had some success at this with the Shalom Hartmann Institute’s Muslim Leadership Initiative; and events like the book tour dog and pony show.

Klein Halevi struck back in a tweet and called me an “ultimate shameless anti-Zionist Jew.” In the right-wing context he used that term, it was meant to dismiss my views and essentially render me outside the accepted discourse on Israel-Palestine. When I objected, a torrent of his Twitter followers, whom I call his zio-groupies, flooded my timeline. Within less than 24 hours, I’d been called everything from shithead to kapo, Judenrat, fucking anti-Semite, self-hating Jew.

But the most offensive tweet came from a former IDF senior officer who served as chief military prosecutor in the Occupied Territories, Lt. Col. Maurice Hirsch. In a profile written by Noam Rotem for the Hebrew-language, Mekomit, he reported that not only did Hirsch arrest, try and jail children for offenses like stone-throwing, he also was responsible for the arrest and detention without trial or charges of Palestinian security suspects. Hirsch even at one point advocated hanging for Palestinian security offenses.

In his Twitter profile, he notes that he now is the legal counsel for the anti-Palestine hate group, Palestine Media Watch. It is a reduced version of MEMRI, devoted to publishing lies, and half-truths about supposed Palestinian anti-Semitism.

Hirsch posted this tweet in which he claimed that Joseph Goebbels was my “hero.” As one of my detractors recently said (and I took this as a point of honor rather than the insult it was intended) that I have the hide of an elephant. As far as taking the abuse heaped upon me here in the comment threads and on social media, that is generally correct. But this crossed a red line. To have a Judeo-fascist link me with Hitler’s chief propagandist was not only offensive, it was anti-Semitic to its core.

I reported the tweet to Twitter and earlier today it locked Hirsch’s account. Apparently, he deleted the tweet and his account was restored to him. However, he had already a duplicate of the tweet, which I also reported. To show how absolutely capricious and inconsistent Twitter is, it refused to delete the duplicate tweet, which it had earlier marked as hate speech the first time it was posted and report.

Hirsch isn’t an outlier. He’s merely a slightly more virulent version of what pro-Israel discourse has become. It has been shaped by the fierce hate stoked by Israel’s dominant far-right discourse. All dissent is not just anti-Israel, but anti-Semitic. Judaism has become subsumed by Israel. There is no longer any distinction between Jew and Israel. As I’ve written here before, this is the ultimate form of anti-Semitism as practiced by David Duke and white supremacists: the conflation of Zionism and Jewishness. What a mess of things this makes of our precious Jewish identity.

Fascinating story.  I wonder how long it will take for the Truth about this to become part of mainstream Jewish / Zionist/ WW11 / Israel / Nazi history?!

I think I remember reading somewhere, that it was originally a German Zionist idea, that all German Jews should wear a visible Jewish-star patch on their outer clothing, as an anti-assimilation device. Or maybe just that they embraced the idea, once the Nazis had required it.

Your tale of the assasination of Arlosoroff, reminds me of another assasination of a witness of Zionist-and-Nazi collaboration: Rudolf Kastner; as related in Ben Hecht’s book, “Perfidy.”

‘… Thus, Haavara served a critical role both in destroying the momentum of the boycott and offering the German economy a shot in the arm when it needed it the most…’

BUT the agreement did give sixty thousand German Jews a reason to move to Palestine. In that way, and only in that way, could they retain at least a portion of their wealth.

After the war, Wisliceny served as a witness at the Nuremberg Trials and wrote several sworn statements about SS activities; his testimony was used at Eichmann’s 1961 trial in Jerusalem (see also Eichmann Trials). Wisliceny himself was sentenced to death and hanged in Bratislava in 1948.

One needs to be a scholar to make sense of historical events.