Let’s get one thing out of the way first.  This is not a Nation State law or a Jewish Nation State law.  It is a Death to Democracy law.  A Jewish Theocracy law.  Israel is now no different from your average Muslim or Buddhist (Burma) or Sinhalese nation-state, which privileges one religion over another.  It is little different from Saudi Arabia, Pakistan or Iran.  It now explicitly, rather than implicitly, grants supremacy to Jews over non-Jews.  It now explicitly states it will fund Jewish building projects and settlements and offer nothing (or next to nothing) to non-Jewish communities.  Of course that was de facto practice before.  Now it is inscribed not just in law, but in the Basic Law, which is Israel’s equivalent to–though not precisely the same as–our constitution.

Israel is no longer a state for all its citizens regardless of religion. It is a state by, of and for Jews.  The anthem is for Jews, the flag for Jews, the language of Jews.  State benefits–for Jews; jobs–for Jews; health care–for Jews; education–for Jews.  If you substitute Aryan for Jew you’d have something comparable to the Nuremberg Law of the 1930s.

But oddly, what this new Law does more than ever is declare a clear dichotomy, an inalienable break between Diaspora Jewry and Israel.  So ironically while Israel declares itself a supremacist Jewish state, the rest of the Jews of the world resoundingly reject this designation.  In fact, more and more (though perhaps not yet the majority) reject the notion that Israel represents them at all as Jews.

So we’re seeing a profound alienation develop between Israel and abroad.  But the question is–how will Diaspora leaders and organizations respond to this outrage?  Of course they will bellow like wounded buffalo, that it is a terrible thing.  That it violates the wonderful liberal Zionist Declaration of Independence which promises equal rights to all regardless of religion.  As if they don’t recognize that Israel has never honored that document. 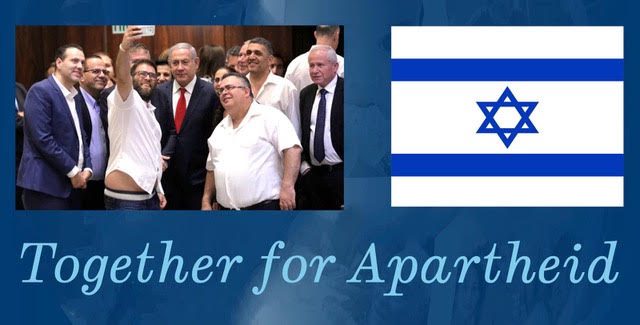 So again the question rears its ugly head: what will they do?  Will you mouth platitudes or take real concrete action?  We all know the answer.  The Diaspora communal leadership has never considered going it alone.  It could never fully sever ties to Israel.  It could never refuse collaboration or punish Israel for offenses, no matter how grave.  Diaspora has always accepted its secondary status in the Jewish pantheon.  It might not admit it is secondary. But when pushes came to shove is always accepted Israeli supremacy.  Not all of the Diaspora, but certainly the key leaders and groups, especially those affiliated with the Israel Lobby.

Personally, I doubt these individuals will ever develop a spine, that they will ever declare their Jewish independence.  If we Jews ever wish to establish our own agency we will have to overthrow the old dinosaur leaderships, establish new institutions, or wait until the Old Guard withers and dies.

As I wrote, many of these provisions of the new law were observed de facto in practice by the Israeli government.  We all knew it was racist; an apartheid state.  But until now, Israel could reject such claims and declare itself a secular democracy in the western style.  No longer.  It is not a democracy.  Some might argue it never was.  Others that it stopped being a true democracy in 1967 or later.  I personally believe it has ceased being so for decades.  So if Israeli democracy was dead, it is even deader than dead (if that’s possible). Instead of a few solid nails in the coffin, there are now scores of them sealing the coffin shut.

There may still be a safety valve, a fail-safe mechanism to save the State from its worst instincts.  The Israeli Supreme Court may review the law.  It may find the entire Law or parts of it illegal.  If so, some of the provisions may be eliminated.  But the Court is a shadow of its former self.  It now features settler justices and far-right legal figures who endorse the worst aspects of Israeli nationalism.  Though the far-right parties still chafe under the Court’s annoyances, even they would have to admit it is largely toothless and eyeless.  So don’t look to the Court for redemption.  At best, it will throw out a few of the worst clauses.  Its ultimate goal is to preserve Judeo-supremacy in Israel, while being able to say to the world it exercised judicial restraint upon those worst impulses.  It’s akin to a Roman emperor after giving thumbs down throughout a bloody afternoon at the Forum, sentencing gladiators to death with aplomb, then deciding at the very end of the day, that he needed to show a modicum of mercy, giving the last victim a thumb’s up.  Thus, he could have it both ways, enjoy the mayhem while being able to say to his subjects that he was a merciful ruler.

Contemporary Israel is a maw of human suffering masked by a thin veneer of pseudo-democracy.

‘ ..Muslim or Buddhist (Burma) or Sinhalese nation-state, which privileges one religion over another…’

Well, no. Israel doesn’t define Jewishness religiously, but pseudo-racially. One can never enter a synagogue, and be a Jew. Believe whatever you want (as long as it’s not Christianity or Islam). You can still be a Jew.

The analogy you’re looking for is South Africa. This is apartheid. In fact…

‘….Part B of the section allows the exclusion of citizens from cities and towns based on their nationality or religion…’

Apartheid. No more, no less.

Colin.
What’s this you just wrote in italics about Part B and the exclusion of citizens? You’re not quoting Richard, and your not quoting this new law either, so who are you quoting? Where’s the attribution?

Here is the complete text of the new law.https://www.jpost.com/Israel-News/Read-the-full-Jewish-Nation-State-Law-562923

What Israel is moving towards here is the notion of the state as the property of one particular ethnic group, with others tolerated but not actually proprietors of the state, so to speak.

The concept isn’t original with Israel. Another state started out with this as its model.

There are many countries which declare their religion including England, Greece and Scandinavian states. Not to many ion, most Arab countries declare themselves as Muslim. https://simple.m.wikipedia.org/wiki/State_religion
What’s important is individual right which in Israel are unharmed for the Arab minority. They get education, healthcare etc’ even if some try to find the minor cases where the system fails.

To compare Israel to South African apartheid is like comparing Mexican cheap labor to slavery.

Oh God, you are only the 20th schnook who’s bandied about that lie here. I’ve linked to this document before. I won’t do it again. But you go find it yourself. And if you try to foist this lame lie on us again, I’ll moderate you for violating comment rules demanding you offer credible proof for claims based on nothing but your own ignorance. For I hope the last time, Israeli NGOs have identified FIFTY, that’s 5-0 Israeli laws which discriminate against Palestinians (not “Arabs,” as you so rudely call them). Palestinians get inferior education, inferior health care, inferior job opportunities, inferior municipal funding. And yes, Israel’s treatment of its non-Jewish minoirities is clearly apartheid, with every parallel to South African apartheid.

[comment deleted: Don’t offer lessons to us. We don’t need ’em. If you have proof, credible proof that Israel isn’t an apartheid state, you may offer it. But offering a link to a Wikipedia article and claiming that’s proof, no.]

Lior’s statement is deliberately disengenious. Sure, there are states that define a state religion, but they don’t deny sovereignty to those of its citizens who don’t subscribe to that religion. Israel just did.

The UK, for one example, does not declare that England is the state for the members of the Anglican church (most of whom do not live in the UK, in fact).

The UK insists that it is the state of its citizens, true regardless of their race, religion or ethnicity. And – just as important to this issue – Anglicans who aren’t British citizens are regarded by the UK as……. foreigners. Nothing more. No less.

Compare and contrast to this appalling Basic Law.

“What’s important is individual right”…. is a statement that can only be said by a member of the Privileged who are comfortable in their superior status.

“They get education, healthcare”… oh, pity the White Man’s Burden.

You really do come across as the poster-child of someone with the mindset of a 19th century colonial overlord, only you are too arrogant to see it.