The Guardian has uncovered a major element of the Shai Masot scandal.  I speculated in my last post about this story that Masot worked for an Israeli intelligence agency.  No one I consulted found it likely it could be the Mossad.  Masot was too public and too pushy to be Mossad.  Others speculated that he worked for the IDF intelligence unit, AMAN, since he had until recently been an IDF Major.  But his LinkedIn account noted that he’d left the IDF.

Israeli minister Gilad Erdan meets with Conservative Friends of Israel MPs during the London visit, when he also met with Shai Masot

Now the Guardian has put two and two together and gotten closer to key elements of the story.  He worked for the Strategic Affairs ministry headed by ambitious Likud pol, Gilad Erdan.  His agency has been tasked with mounting a global campaign against BDS.  At a conference in Israel, one of Erdan’s fellow ministers even threatened BDS activists with “civil elimination,” a term dangerously close to ‘assassination’ in colloquial Hebrew.  Erdan’s budget is huge ($34-million devoted to fighting BDS alone) as the latter has become the bête noire of the Israeli state–named as Public Enemy Number 1; the new “existential threat” to the “Jewish state” and Jewish people. 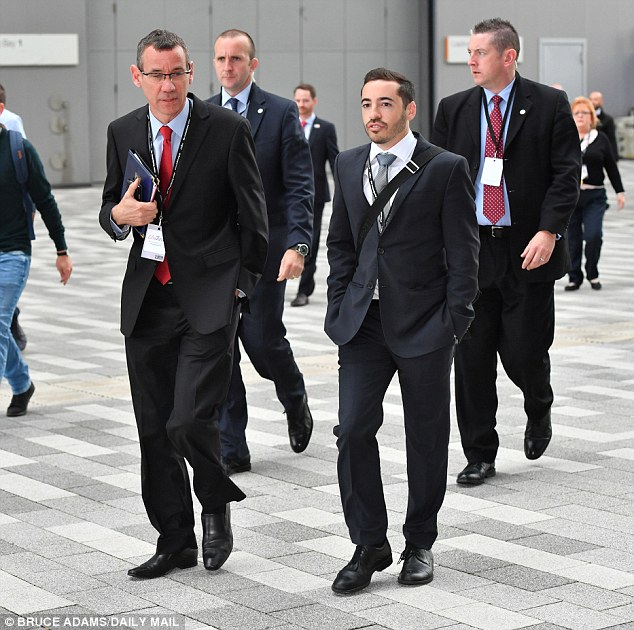 The Israeli foreign ministry, according to the Guardian story, recognized the danger of what Masot was doing and its London staff wrote a cable warning that freelancing of the type he was engaged in was extremely dangerous because funding UK organizations directly with Israeli state funds would jeopardize the non-profit status of any UK non-profit who accepted them.  In videos, Masot boasts about founding pro-Israel astro-turf groups which were local in name only.  Masot pulled the strings both financially and politically.  He also boasts about collaboration with Conservative Friends of Israel and offers 1-million pounds to a Labour Friends of Israel MP in order to encourage other MPs to participate in junkets to Israel.  Joan Ryan, the MP before whom he dangled this bauble didn’t seem to have a clue as to the danger it posed to her.  She merely joked to Masot that she didn’t expect he was carrying the 1-million in a bag on his back!

It’s important to note that despite the fact that the Israeli foreign ministry and UK embassy may’ve chafed at the rogue activities of operatives like Masot, he was the ambassador’s responsibility as he worked with and for him.  The accompanying picture of Regev with Masot confirms this.  Thus Regev’s attempt to dissociate himself from Masot after the fact are disingenuous.

Electronic Intifada also reports that Masot may’ve engaged in surveillance of Scottish BDS activists by shooting photos of them at events and sending the data to the Shabak, which used it to expel at least one Scottish pro-Palestine leader after he attempted to enter Israel as part of a preparatory visit for a Scottish parliamentary delegation.

One telling passage from the MFA cable confirms that the Israeli government is far more aggressive in creating such astroturf groups in the U.S. than it has been so far in Britain:

“Attempts to act behind our back have happened before and will happen again, but ‘operating’ Jewish organisations directly from Jerusalem, with no coördination and no consultation, is liable to be dangerous,” it said. “Operating like this could encounter opposition from the organisations themselves, given their legal status: Britain isn’t the US!”

This calls to mind the multitude of Israel Lobby groups which closely coördinate their activity with the Israeli government, and perhaps more.  They include StandWithUs, The Israel Project, Christians United for Israel, CAMERA, and many others.  In fact, then-deputy foreign minister Danny Ayalon boasted on an Israeli TV show that his ministry was funding a SWU lawsuit against the Olympia Food Coop.

This reinforces my strong impression developed over the years that many of these groups, which are ostensibly independent U.S.-based groups are either fully or partially “operated” by the Israeli government.  I have even reported on several projects of these NGOs which were explicitly funded by the government.  This should endanger their non-profit status and force them to register as agents of a foreign government.  But our IRS hasn’t chosen to tangle with the Israel Lobby or even the settler lobby (though it should).

Returning to the Strategic Affairs ministry, it released this statement in response to the September MFA cable.  It indicates that the ministry either lied or was totally ignorant about what its own operatives like Masot were doing in Israel’s name:

“We work in coordination with the Israeli embassy in Britain and the Foreign Ministry. Every action is done according to the law and in accordance with government decisions and the ministry’s authority. We regret there are elements in the Foreign Ministry who don’t understand the division of responsibilities between the ministries and prefer to deal with struggles of honor instead of focusing on our goals.”

Someone back in Tel Aviv should be eating crow about now.  But given the abysmal lack of accountability in virtually everything done in the government, it’s doubtful anything will come of it.

Finally, a bit of media criticism.  This Al Jazeera story is big enough and damaging enough as it is.  There is a temptation among certain circles on the left to embellish it or render it even more lurid than it already is.  We should stifle this temptation lest we damage the credibility of the original report.  The hasbara apparatus will desperately seek ways of smearing the AJ documentary.  We should not give them ammunition to do so.

The Canary, an otherwise worthy progressive news site in the UK, devised this fake news headline for its story:

BREAKING: Israel put up a £1,000,000 bounty for Labour insiders to undermine Corbyn [VIDEO]

There is no “bounty” and the 1-million pound fund is not directly intended to undermine Corbyn.  Rather it’s intended to schlep Labour MPs to Israel on traditional political junkets.  Certainly, while there the Israeli hasbara folks will try to inculcate their brand, which would include disparagement of Corbyn.  But that is not the primary goal of the fund which Masot offers Ryan.

In short, this is Buzzfeed-style clickbait journalism bordering on fake news.  I wrote to the author of the story who is also editor in chief of The Canary.  She stands by the headline resolutely and refuses to admit anything wrong with it.  This is the hubris of the radical left.  Too self-righteous to admit when it has gone too far.

Not surprising Masot is associated with Gilad Erdan. These guys are the types that would attempt such harebrained antics because they are too stupid to consider the consequences. Erdan in particular is one of the biggest morons currently sitting in the Israeli gov’t (considering they are all morons to varying degrees, Erdan is one who really stands out for his primitive thinking). This scandal has done untold damage to the Friends of Israel (FoI) organization in the U.K., and I cannot see how British politicians (especially the conservative ones) can continue to associate themselves with the Jewish lobby.

And BIG kudos to Al Jazeera!

@ Danny
This is only as small part – maybe the most revealing, we don’t know yet – of a four episode documentary by an undercover journalist from Al-Jazeera who ‘infiltrated’ the Israeli lobby in the UK for 6 months.
First episode airing tomorrow, Wednesday 11th. Here’s the program, you can also see the episodes online, I certainly will !
http://www.aljazeera.com/news/2017/01/israels-parliamentary-plot-uk-politicians-170107220710691.html

Just watched it. Breath-taking expose! This Shai Masot is a real mover and shaker in London, isn’t he? (well… at least he WAS :-)))). Just incredible how easy it is to bribe conservative party politicians – they literally have no scruples that aren’t for sale.

But it looks like Labour pols are much harder to buy. It’s undoubtedly the Corbyn effect. If he becomes PM of Britain Israel will have its work cut out for it.

Al-Jazeera just took down this hydra monster. This expose is nothing short of a train wreck for the Friends-of-Israel movement.

his name is not Gil but rather Gilad.

@ Yaniv: I’ve made that mistake before–sheesh! Thanks for the correction.