Itamar Ben Gvir is one of the most radical political figures in Israel.  His hatred of Palestinians, along with his incendiary rhetoric justifying Jewish terror, may just get him a seat in the next Israeli cabinet, if the far-right coalition wins the November election. Bibi Netanyahu labored mightily to convince Ben Gvir and his fellow terrorist wannabe, Bezalel Smotrich, to join their parties into a single list.  Separately, each one would likely have failed to pass the electoral threshhold.  Together, they will add seats to the potential future prime minister’s majority.  With the center right grouping neck-and-neck with Likud, every seat counts to achieve a 61 vote majority. 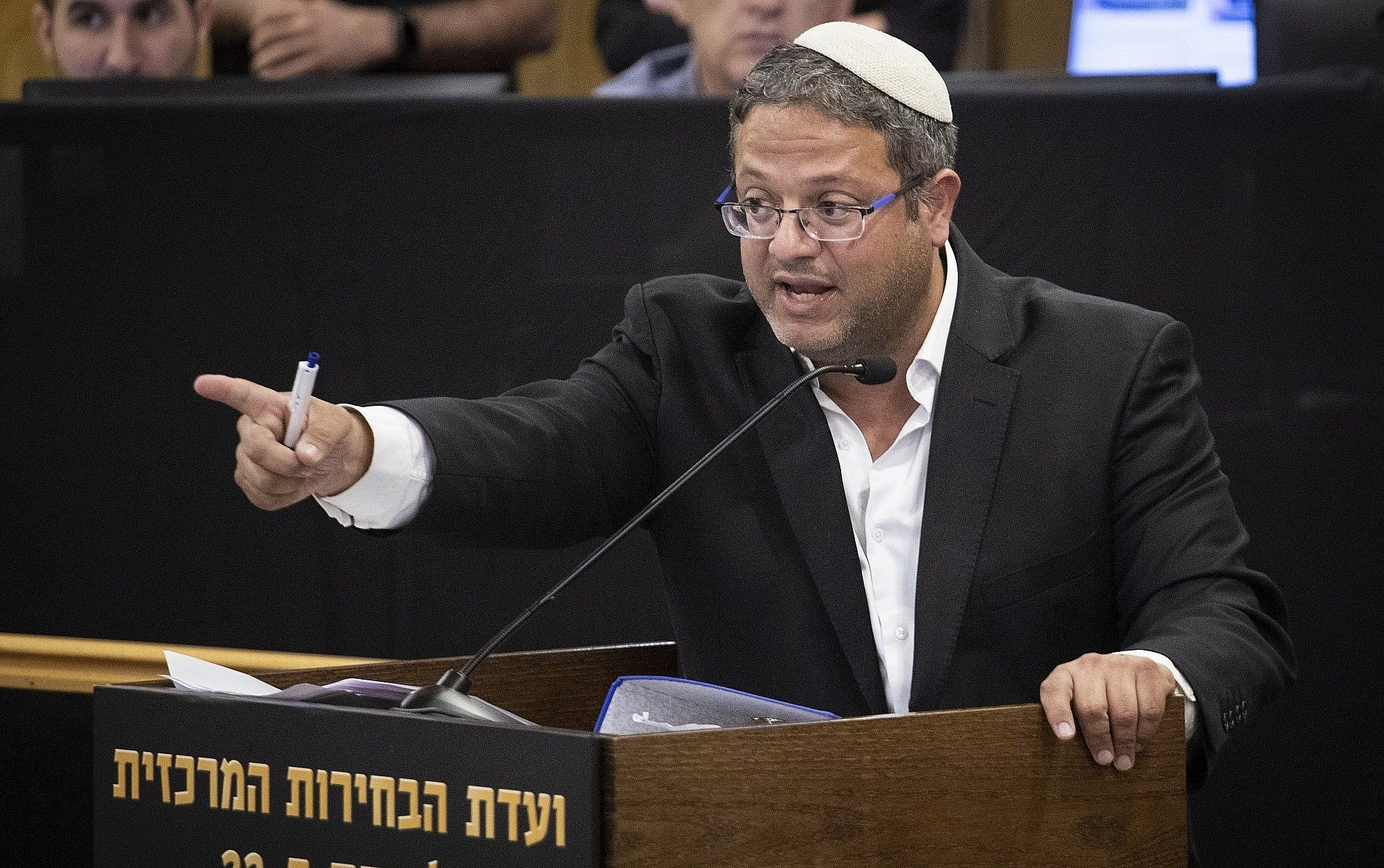 Ben Gvir’s extremism is even too much for the US to tolerate.  As a rule of thumb, US administrations never interfere in Israeli elections (though Netatnyahu regularly interferes in ours, even making a TV ad for Mitt Romney). But Ben Gvir is a red line.

As I wrote in my last post, Sen. Bob Menendez, one of the Israel Lobby’s most loyal foot soldiers, scolded Netanyahu and warned him of negative consequences if he brings Ben Gvir into his government.  (For some reason, the Biden administration has given Bezalel Smotrich, equally repulsive, a pass.)  The State Department too has warned that adding Ben Gvir to a ruling coalition will endanger US-Israel relations.

An Israeli just sent me a link to a 2011 TV interview Ben Gvir gave to Channel 2.  In it, he shows off pictures of his heroes hanging on the living room walls.  By the way, when Netanyahu sat in Ben Gvir’s living room when they negoatiated the merger, he sat under a picture of Baruch Goldstein featured in the video above.  Ben Gvir is cleary proud of it and points it out with rapt devotion.

I’ve translated his interchange with an interviewer viewing the pictures on his living room wall:

I: A miracle will happen and this [Al Aqsa] will disappear?

BG: No, no, no. Miracles don’t happen quickly. We must work toward this.
[Showing a portrait of Meir Kahane] This is Rabbi Kahane, my teacher and rebbe [spirtual guide]

I: On the wall is another picture: Baruch Goldstein, the man who shot to death 29 Muslims at prayer in the Cave of Machpelah massacre.  “But the tower atop the mosque is destroyed.”

BG: There is a statement in this picture. A statement that’s very clear.

I: When your son comes to you and asks you: who is this daddy? Who is that man in the picture?

I: But I ask you, what is the difference between what he [Goldstein] did and a Palestinian terrorist who comes and bombs a synagogue?

BG: Heaven and earth! How can you compare them at all?

But as I wrote, there is a tendency for foreign states to focus on a particular individual, as if he is the problem, rather than the entire system he represents.  This allows them to avoid the real systemic problem.  Ben Gvir is the symptom, not the cause.  What’s rotten is the Israeli state he represents.  And this, no American president would ever touch with a ten-foot pole.

But Menendez’ shot across the bow is a seismic shift in relations between Israel and the US.  The time will come when Democrats will not be averse to cutting off aid and even imposing sanctions on Israel for its mass violence and illegal occupation of Palestine.  It won’t happen quickly.  But these are the birth pangs, not of a new Middle East as Condi Rice said during an Israeli invasion of Lebanon, but of a more skeptical, provocative relationship.

Ben Gvir is loathsome and unfit to hold a seat in the Knesset.

That having been said, your claim that, “As a rule of thumb, US administrations never interfere in Israeli elections…”, is erroneous.

@ Bertrand: You’re comparing apples to oranges. Netanyahu actually made and aired a commerical for a GOP presidential candidate. An NGO which actually had no connection to Obama other than a few of its executives working at one time on an Obama campaign is not a “US adminmistration interfering in Israeli elections.”

You see, if you falsely construe articles like this one, I will call you out. Make sure whatever you offer to support your claims actually reflects them. If they don’t, you will look foolish.

So no, my claim is not “erroneous.” But yours is.

It is not my claim, but the claim of WaPo Opinion Columnist, Jennifer Rubin, who said, and I quote, “While the administration has shown exceptional deference to “moderates” in Iran his [Obama’s] administration couldn’t be bothered to avoid gross interference with the elections in the only democratic country in the region.”

“ An NGO which actually had no connection to Obama other than a few of its executives working at one time on an Obama campaign is not a “US adminmistration(sic) interfering in Israeli elections.”

@Bertrand: Jennifer Rubin is a neo con and daughter of Elliot Abrams a neocon anti Iran war hawk. She the most right wing of all Washington Post columnists and has a deep pro Israel bias. She is a Likudist an anti Obama. Nothing she writes is credible.

I’ll have to check every source you use from now on. And you must provide links so I can do that.

Richard,
Three points:
Netanyahu never sat in Ben Gvir’s apartment. The negotiations were in Netanyahu’s home in Cesaria.
2. Goldstein was an MD, not a dentist.
3. You are well known to support democracy. As such, anyone democraticly elected in a public election, to a public office, is allowed to serve. Concerning the possibility that Ben Gvir will serve in the Israeli cabinet-it would seem that this is an internal Israeli issue. Do you not agree?
Efrat Porat

@ Efrat: there are pictures of Netanyahu seated with Ben Gvir & Smotrich with the Goldstein picture hanging on the wall behind them.

Yes, you are correct about Goldstein being an MD.

anyone democraticly elected in a public election, to a public office, is allowed to serve.

Absolutely untrue. Every democracy has provisions which exclude elected officials from serving for a variety of offenses. Some are civil offenses, some criminal. Not to mention recalls which remove elected officials from office. Nor is Ben Gvir “elected” in the sense that other democracies elect people. VOters don’t vote specifically for Ben Gvir. They vote for a party or coalition. Not the same.

It is true that I support democracy. But Israel is not a democracy. It is a corrupt theocratic ethncracy.

As for Ben Gvir’s serving in a cabinet: definitely not just an ‘internal Israel issue.’ Nations have every right to determine their relations with other states. If they sanction those states for whatever reason, they may do that. The fact that it has a political or economic impact is not the responsibility of the sanctioning party.

Ben Gvir is a gobshite. We know that already.

But how many traitors and insurrectionists are still sitting in the United State Congress? Dozens, I’d venture to say, and most of them would keep their seats if there was an election today.

Let’s not even consider comparing Bibi to Trump.
Bibi, though a venal character, didn’t attempt a violent coup d’etat.

@ Clancy: Bibi was in power for 15 years not 4. Nor did he need to mount a coup detat. The Likud has had total power (except for a short Interval) in Israel for 50 yrs.

Very few Americans know what Ben Gvir is. And a significant minority of Israelis support him.