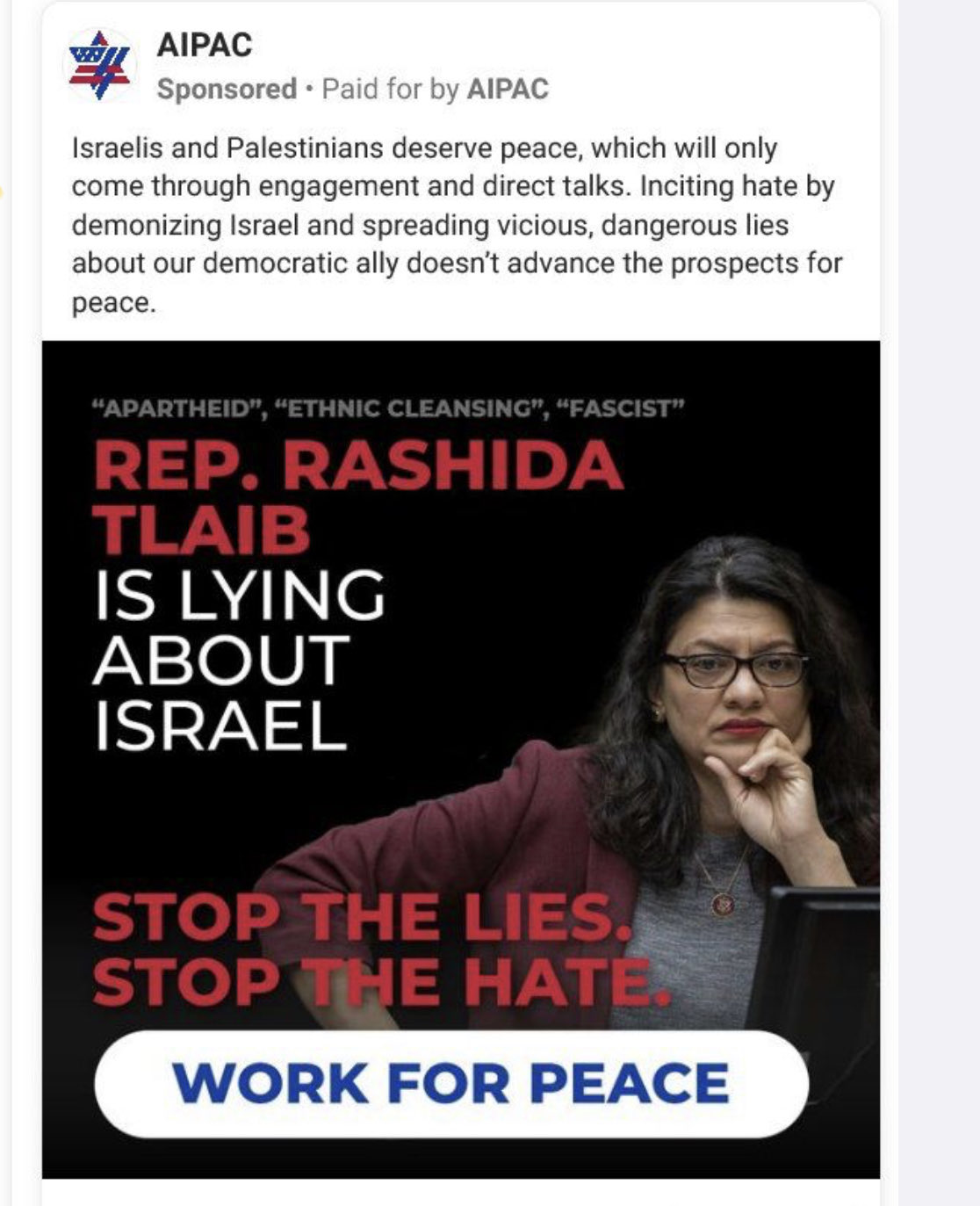 Peter Beinart published a Jewish Currents essay last month about the attack by the Israel Lobby and its water-carriers in Congress against progressive Muslim women of color, notably Reps. Rashida Tlaib and Ilhan Omar.  He noted that the same pro-Israel groups and Jewish leaders who are the first to shrey–anti-Semite!–are almost always the first to spout hate against Palestinians and Muslims like Tlaib and Omar:

In June, three Republicans in the House of Representatives—Michael Waltz, Jim Banks and Claudia Tenney—introduced a resolution censuring Rashida Tlaib, Ilhan Omar, Ayanna Presley, and Alexandria Ocasio-Cortez for…“inciting anti-Semitic attacks across the United States.” House Democrats accused their colleagues of Jew-hatred as well…Rep. Ted Deutch…characterized their accusations of apartheid, and Tlaib’s opposition to a Jewish state, as “[a]ttacks . . . against Jews,” that “have led to antisemitism.” Four more House Democrats—Josh Gottheimer, Kathy Manning, Elaine Luria, and Dean Phillips—denounced unspecified members of Congress for calling Israel an apartheid state or claiming it has committed acts of terrorism. “These statements,” they alleged, “are antisemitic at their core.”

He contends (correctly) that none of the Squad are anti-Semitic, but that all of these pro-Israel House members are guilty of a reverse form of racism.  He calls it “anti-Palestinianism,” and suggests it is a companion term to anti-Semitism, describing hate directed specifically at Palestinians. The consequence of this hate is to deem Palestinians as inferior to us, and unworthy of the same rights we ourselves enjoy.

I use his essay as a take-off point to delve into a related issue.  Along with many progressive Jews, I have argued for years that anti-Semitism has little or nothing to do with Israel or Zionism. The conflation of the two is deeply toxic to Jews and Judaism, because it makes us synonymous with Israel and responsible for its worst policies.

We must hold all Israel Lobby and pro-Israel supporters to the same standards we would hold an anti-Semite. We must call out anti-Palestinian hate with the same rigor that we do anti-Semitism.  Of course Israel Lobby groups like the AJC and ADL will never do this. Not in a million years. But that doesn’t mean we shouldn’t hold them and Jewish members of Congress who are largely creatures of the Lobby, to account.<

Here Beinart speaks of the critical necessity of making visible to American Jews what has been visible to Palestinians for generations:

What’s crucial isn’t that anti-Palestinianism gets its own definition. It’s that the concept enters US public discourse, allowing more Americans to recognize the bigotry that afflicts Palestinians—those in Israel-Palestine as well as in the diaspora—and their supporters, who are harassed and penalized in the US. As the recent movements against police violence and sexual harassment have shown, making visible what for many was previously invisible can transform political debates. Naming anti-Palestinian bigotry could help do the same.

To deny the term anti-Palestinianism to Palestinians is the same as to deny anti-Semitism to Jews.  It demeans them and says that their experience of suffering isn’t worthy of recognition.  We must not only reject this ourselves, but we must protest it even more vociferously when our would-be leaders do it.

Nothing spreads anti-semitism faster than the actions of the State of Israel. It constantly acts in the encouragement of racism and always appears to do so in a cruel manner. The times Israel was seen as a young and courageous state are long gone.

Skip the question of whether or not ‘The Squad’ is anti-Semitic, and ask the greater question of, ‘Why is ‘The Squad’ so focused on Israel, and not focused on the many other troublesome countries like, Russia, Belarus, India, China, Myanmar, Iran, Turkey, Venezuela, Cuba, North Korea, etc.?’

Why is Israel the stand out?

What an idiotic question. Why was apartheid South Africa the stand out at the time? The racist whites at the time couldn’t fathom either why they were targeted by the international community as all they wanted was good neighbourly relations with the ‘black savages’ and in any case there were so many other ‘bad actors’ in the world. And but, and but, and but…The state of Israel is the last ‘great’ ever-expanding settler colonial experiment. Israel committed a crime against humanity in 1948 with the Nakba and until today refuse any return and/or even compensation/claims for/by the Palestinian refugees and/or their descendants. Need I continue? #JewishStateNakba #OneDemocraticState

And to add to what Willem said, The U.S. gives $3 billion-to $5 billion to Israel annually and UNCONDITIONALLY! There are other countries with human rights violations like Saudi Arabia that we should not be giving to, and that has been said. As for what K.C. said, “‘Why is ‘The Squad’ so focused on Israel, and not focused on the many other troublesome countries like, Russia, Belarus, India, China, Myanmar, Iran, Turkey, Venezuela, Cuba, North Korea, etc.?,” t’here are also a lot of dictatorships around the world that our country does not give money to. So these billions of dollars being given to Israel to oppress the Palestinians, could be being used to address the so many important issues in our country. We have people who are homeless and living in poverty. And believe it or not, many happen to be Jewish.

@KC: Oy, we’ve been through this so many times before. Whataboutism: an ugly symptom of advanced hasbarosis. Indicating a desperate obsession with diverting debate from Israel’s sins and casting stones everywhere but Israel. The condition often leads to death: brain death.

Rashida Tlaib is concerned about Palestine because she is… Palestinian-American. Fancy that. Ilhan Omar is concerned about Palestine because she is Muslim-American. And Muslim-Americans generally, just like Jews, care about their fellow Palestinian Muslims who face religious persecution and oppression. As for the other members of the Squad, they show as much interest in Israel-Palestine as they do about any other issue that is relevant to their political agenda.

No one except hasabaroids has ever said of any member of Congress that they must care equally about every place in the world where there is injustice. That is a recipe for cynicism and moral paralysis which, of course, is another symptom of your grave condition.

“IHRA’s concern is that the hyphenated spelling allows for the possibility of something called ‘Semitism’, which not only legitimizes a form of pseudo-scientific racial classification that was thoroughly discredited by association with Nazi ideology, but also divides the term, stripping it from its meaning of opposition and hatred toward Jews” … https://www.holocaustremembrance.com/antisemitism/spelling-antisemitism

Or is Semitism Racism, or Jewish Supremacy?
“policy or predisposition favorable to Jews” … https://www.merriam-webster.com/dictionary/Semitism

Also, most Semites are Arabs, and most Jews are descendants of converts to Judaism, like Christians.

So the word antisemitism has been twisted beyond all recognition, and has been weaponized.

The words anti-Jewish or anti-Israel should be used instead of antisemitism.

[comment deleted: another perfect example of anti-Palestinianism. Bigotry has no place here.

First, you regurgitate the sputum of the ADL-AJC Israel Lobby hasbara, even eliding Tlaib’s comment precisely as they did to take it out of context. You don’t even have enough creativity to come up with your own hasbara. You merely plagiarize your betters.

Another mark of the hasbaroid: if you see elipses in their “quotations” from those they hate, know that the quotation has been truncated and taken out of context to mean anything they want it to mean.

Here are her full unexpurgated remarks, which don’t have a hint of anti-Semitism:

For me as a Palestinian-American, we also need to recognize as I think about my family and Palestine that continue to live under military occupation and how that really interacts with this beautiful Black city that I grew up in. I always tell people that cutting people off from water is violence. And they do it from Gaza to Detroit. And it’s a way to control people, to oppress people and it’s those structures that we continue to fight against,” she said.

“I know you all understand the structure we’ve been living under right now is designed by those who exploit the rest of us, for their own profit. I always say to people ‘I don’t care if it’s around the issue of global rights, and our fight to free Palestine, or to pushing back against those who don’t believe in a minimum wage or those who believe we don’t have a right to healthcare and so much more.’ And I tell those same people, that if you open the curtain and look behind the curtain, it’s the same people who make money and—yes they do—off of racism, off of these broken policies. There is someone there making money and you saw it, it was so exposed during the pandemic.]

Can anyone claim that Israel doesn’t “profit” from Occupation and mass violence? Of course it does. It profits in the sense that it advances its own interest in maintaining an evil unjust system. It profits literally from the military complex which earns billions from the advanced weapons systems and technology which feed the maw of the garrison state.

Nor does this have anything to do with anti-Semitism. Tlaib clearly indicates this is criticism of Israel’s oppression of Gaza and Palestinians in general. There isn’t a word about Jews, hence it cannot be called anti-Semitic.

I fully agree with this!