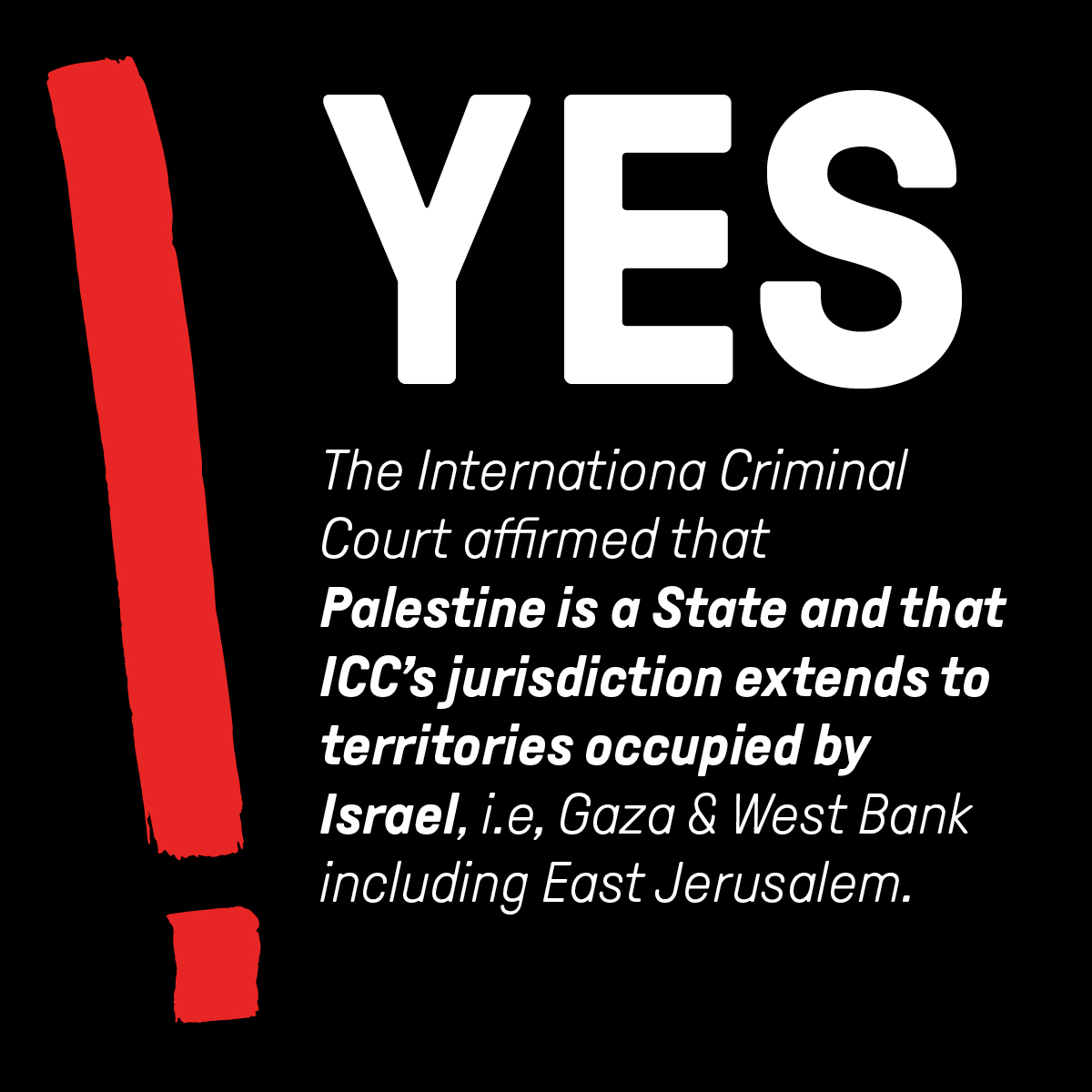 In a groundbreaking ruling, a three-judge ICC court has found that the chief prosecutor may commence a war crimes investigation against both Israeli and Palestinian leaders for major violations of international law. They include: building settlements, the murder of Palestinian civilians during Operation Protective Edge and the Great March of Return, and Palestinian rocket attacks against Israeli civilians populations.  The ICC prosecutor had asked the judicial panel whether she had jurisdiction over the case given that Israel is not a signatory of the Rome Statute, which established the organization; and that the Palestinian Authority (PA), which is a signatory, is not universally recognized as a nation state.

By a 2-1 vote, the judges found that the international body did have jurisdiction because the PA did fit the proper definition of a nation state.  This throws the ball into the chief prosecutor’s court.  However, her appointment ends in June and signatory states will vote on a new individual to take on this role.  Though the case could not be abandoned, s/he has discretion as to how it is pursued.   The U.S. and Israel will try to martial their allies to appoint a prosecutor who would be less inclined to pursue the investigation vigorously. It is incumbent on voting states to elect a candidate who will pursue the investigation and any potential prosecution vigorously.

This multi-tweet account by an international law expert describes the procedures that will follow from today’s ruling.

Israel, of course, screamed bloody murder at the result.  It’s UN ambassador, Gilad Erdan called the ruling “anti-Semitic” because it singled Israel out for criticism.  This of course, perfectly fits the IHRA definition of anti-Semitism, and points to why it is so problematic.

Another argument used against ICC involvement is the claim that Israel upholds the rule of law via its court system, which is empowered to investigate such matters.  Under the Rome Statute, the ICC may only take up an investigation if the judiciary of the nation accused refuses to address the accusations. While Israel has  prosecuted a handful of individual soldiers for specific crimes like looting, its legal system has refused to consider the culpability of higher level officers for far more serious breaches.  Thus, despite such claims, the Israeli court system has refused to investigate or hold anyone accountable for the violations alleged.

Israel has so far refused to cooperate with the International Court, claiming it does not recognize its jurisdiction.  Instead, it has relied on the U.S. to run interference on its behalf.  The Trump administration not only denounced the investigation, it placed all the major officials of the agency under U.S. sanctions.  The new Biden administration is reviewing this decision and likely to undo it. However, the U.S. remains outside the ICC.  The State Department has professed its displeasure at the ruling.  As an outsider, we do not wield the sort of influence we might in weighing in on Israel’s behalf.  But Biden will certainly make U.S. views known and seek to exert what influence it can.

We are still quite a ways away from a trial and even farther away from a conviction.  But there can be no doubt that today’s ruling was a milestone on a path toward accountability for Israel’s war crimes.

Finally, the ICC does not prosecute nation states, but rather individuals.  So it’s likely that figures like Netanyahu, Benny Gantz (then IDF chief of staff), and the leaders of Hamas and/or Islamic Jihad would be the targets of such an investigation.

Several years ago, the ICC also considered opening an investigation against Israel for its attack on the Mavi Marmara.  The Court declined to pursue one.  The judge who voted against doing so is the same Hungarian judge who voted No in the current case.  An international law expert I consulted told me that he believed she had determined that this current case was the stronger one, and that it would be better to drop any investigation of the 2010 incident, in which 10 Turkish citizens were murdered by IDF commandos.

You must carefully read and respect the comment rules.  Your first comment is moderated and approved by author. Comments violating the rules will be deleted.
Subscribe
13 Comments
Oldest
Newest Most Voted
Inline Feedbacks
View all comments
Sepp.

I have a feeling this isn’t going anywhere.

Considering that the ICC really doesn’t have a great track record when it comes to getting convictions, it’s likely that Bensouda will kick the can down the street.

@ Sepp: Your “feeling” on any subject related to this isn’t worth a bucket of warm p**s.

“But there can be no doubt that today’s ruling was a milestone on a path toward accountability for Israel’s war crimes.”

And a milestone on a path toward accountability for Palestinian war crimes”.

@ Forrest: I don’t know about “fair.” Israel’s far superior lethality is not exactly “fair.” But yes, a few Palestinian militant commanders are liable to be charged for rocket fire which killed or injured the few Israel civilians who were victims. As they should. But that’s nothing compared to the scores of IDF senior commanders, chief of staff, defense minister & PM who could/should be charged for killing many, many times more Palestinians than Palestinians killed Israelis.

Fair is trying all the Palestinian commanders who ordered rocket and mortar fire on Israeli civilian targets in Ashkelon, Ashdod, Sderot, Beersheva, etc.

Surely you’d agree that a commander who targets Israeli civilians doesn’t get a pass because his rocket lands in a field or is shot down by the Iron Dome system.

Israel made the greatest effort to warn away Palestinian civilians who were in Harm’s Way, using ‘knock bombs’ and cell phone calls to civilians living near military targets.

Is this my final comment, or can I continue?

@ Forrest: Do me a favor, read the blog post before wasting my time. I wrote several times that Palestinians were liable to be called before the ICC as well as Israelis. So there is no need to speak as if I hadn’t writtten this or didn’t believe it.

Israel made the greatest effort to warn away Palestinian civilians who were in Harm’s Way,

STop peddling bullshit here. That may work in whatever other venues Hasbara Central assigned you to. But not here. Under international law it doesn’t matter whether they sent Florence Nightangale door to door to warn Palestinians. What matters is the number of civilian dead. What was the outcome of actual IDF actions. And this was essentially mass murder. Which is why Israel, if there is any justice, will have many senior commanders, a few ministers and at least one PM testifying in The Hague.

How many Israeli civilians did the rockets kill or injure during Protective Edge compared to how many Israel killed? The ratio was something like 20 to 1. That should be a similar ratio to the number of those charged on each side and the severity of the charges.

I was defending you Richard! – but whatever – Moderate me if you have something to hide. It is now obvious whom you really serve depsite superficial appearances.
Thank you.

@ turtle: I looked over your YouTube account and I found a number of the videos you feature to be offensive. But given your derisive comment I will gladly moderate you

I reviewed your YouTube channel and several videos featured are offensive. I don’t need that sort of content to defend me. Since I already had moderated you and your derisive insult followed that, you are now banned.

[comment deleted: this is not a place to promote yourself, your content, your conspiracy theories, etc. You are moderated.]

” That should be a similar ratio to the number of those charged on each side and the severity of the charges.”
I think this is an absurd statement. Has there ever been a war that the two or more sides strive for equality in deaths or wounded? War is basically both sides trying to overcome or obliterate the other side. You know as well as I that if Israel desired it could entirely destroy e.g. Gaza. however the real object of war is peace in the end.
When the ICC starts to put Jews/Israelis on their judicial staff[maybe they do have] and gives key positions to Israel on the UN counsels that would be ‘equal ratio’ but in my opinion the UN is a fake org catering to those who run It on being told what to do, hardly objective.

@ Avram Stern: Your comment is Sui generics, not at all responsive to the assumptions involved in mine.

Your comment also ignores the decades worth of development of the laws of war. Wars are not fought to kill the maximum number of the enemy. Attaining victory in war does not involve maximum killing. It involves winning strategic victories over one’s enemies. Sometimes that involves killing, sometimes it involves wholly other matters like logistics, weaponry, strategy, tactics, etc.

Israel cannot simply wipe out Gaza even if it wanted to (and it would want to for sure if it thought it could get away with it). It understands that any hesitancy to bring its leaders into the dock at the Hague would evaporate should it kill a million Gazans and turn it into Dresden circa WWII.

The ICC is a judicial body. Not a political body. Its judges are not swayed by political considerations. Or shouldn’t be. There are no Palestinian judges and there are no Israeli judges. In a case involving both as parties it would be inappropriate to have either an Israeli or Palestinian judge.

Good, let them demolish the elected right-Zionist politicos and the more corrupt members of the Palestinian quasi-government. Better to do it now, when there still is an Israel, then later after the Gotterdaemmerung war and these characters are beaten to death by the mutant Nitro-Mauraders of the desert Hellscape……because that “Mad Max” knockoff is coming to the Middle East, the parties of the international far-Right have decreed it.