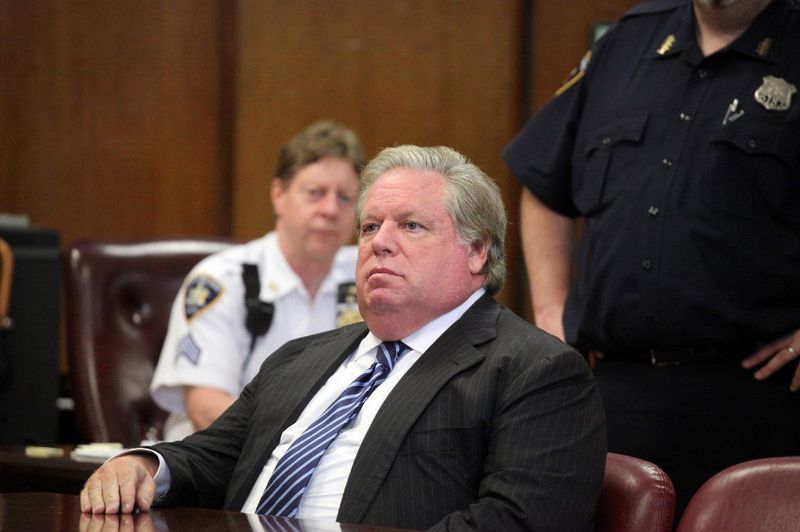 Israel’s leading business publication, Calcalist, reports on a lawsuit which has cracked open a critical business transaction in the history of the Israeli malware developer, NSO Group. The company has the “distinction” of being the international leader in its field of cyber intrusion. It is also a unicorn, valued at $1-billion.

Back in 2010, Eliott Broidy was still reeling from his prime role in a major New York City corruption scandal. A year earlier, he had paid City Comptroller Alan Hevesi a million-dollar bribe in order to land a $250-million chunk of the municipal pension fund to be managed by his Los Angeles investment firm. Hevesi went to prison and Broidy went home. After pleading guilty to a felony charge that would have landed him in prison, the judge permitted him to withdraw the plea and gave him a misdemeanor sentence and no jail time.

During the period when Trump was being accused of having sex with Playboy models like Stormy Daniels, Broidy took the fall for one of the alleged affairs, claiming it was he, and not Trump, who impregnated Shera Bechard and paid her hush money.

A year later, Broidy–a prominent member of the Los Angeles Jewish community who sits on the boards of Wilshire Blvd Temple, Cedar-Sinai Hospital,and the USC School of Business– was still hondeling for deals. This time he hooked up with an Israeli high tech entrepreneur who specialized in product marketing and distribution, Matan Caspi. The latter was drawn to Broidy because he was known to have extensive business contacts in Central and South America. Caspi had just signed a deal to distribute the products of a brand new Israeli start-up and he was eager to seal its first major deal.

At that time, the premier cell phone on the market was the Blackberry. It was, according to Calcalist, the “wet dream” of every hacker to break into the Blackberry and take control of its internal functions. The founders of that fledging Israeli company, known as NSO Group, were Shalev Hulio and Omri Lavie. They were former IDF officers who became serial entrepreneurs looking for the next big thing in technology. After flailing around and several business failures, they hired the hackers who made that dream come true. The product they developed came to be called Pegasus. It was this product that Broidy and his Israeli partner agreed to market to clients Broidy would identify.

As part of this process, Broidy introduced Caspi to a shady Mexican billionaire, José Susumo Azano Matsura, based in the tony San Diego enclave of Coronado. They brought Azano into the deal and he, in turn, introduced them to key figures in Mexican police and intelligence agencies, which desperately needed methods of intercepting the communications of the drug cartels which were ravaging the country through crime and violence.

In 1998, Azano started a surveillance company, Security Tracking Devices. For more than a decade, Azano mostly stayed under the radar, a level of anonymity befitting the clandestine nature of the spy game.

But in 2010, Azano hit the big time and, soon after, the headlines. He won a series of secret contracts totaling $355 million with the Mexican defense department. Azano’s company served as the middleman between an Israeli surveillance company and the Mexican government.

As the deal for the first major sale of Pegasus was about to be consummated, Caspi discovered that Broidy, who had just been introduced by the former to Lavie and Hulio, was attempting to cut the Israeli out of the deal and take full control of the transaction. Caspi counter-attacked and emerged with the deal and cut Broidy out of it. It’s unclear whether Broidy was ever compensated for his role. The other Israelis involved in brokering the deal were to be paid a $750,000 finder’s fee. But they quarreled amongst themselves and with NSO Group, and that was the subject under litigation. The judge in the case has agreed to a defense ministry request that the trial be held behind closed doors; and the name of the broker who bought the first NSO Group malware and the amount of the sale be kept under gag order. Israeli media may not report it. I am doing so.

Pegasus was not sold directly to the Mexican government by NSO. Instead, the company sold its product to a third-party cut-out. Though the defense ministry and courts have placed the name of this individual under gag order, it seems clear from a separate Calcalist article that it was Azano. His company, Security Tracking Devices, purchased Pegasus for $15-million from the Israeli company and, in turn, sold the goods to the Mexican government adding on a hefty commission in the millions, according to Calcalist.

This is the start of NSO, its first major sale. The rest is history. But it’s worth noting that this first sale was orchestrated by a group of financial gangsters, one of whom is in federal prison and the other who is facing a federal criminal investigation. One wonders whether the various companies which bought NSO since then knew or cared about this sordid history. This includes its current owner, Stephen Peel, a British investor and philanthropist who likes to tout his personal commitment to human rights as a former board member of Global Witness.

In 2017, Azano was sentenced to three years in federal prison for funneling $600,000 in illegal campaign contributions to San Diego elected officials. Among them was the district attorney who would be responsible for approving the purchase of the electronic surveillance gear the billionaire was peddling to U.S. law enforcement agencies. He is a Mexican citizen and it is a violation of U.S. law (or it was before Donald Trump was elected, and Russians began doing this with impunity) for a foreign national to contribute to U.S. elections. He had long been on the radar of law enforcement and been suspected of being a major drug dealer as well. He also paid millions in bribes to a Mexican mayor as part of an extortion scheme to fleece a San Diego energy company involved in a property dispute with a rancher whose property bordered one of its plants.

The irony of the secrecy under which the Israeli court has sealed this case is that Calcalist already reported back in 2012 the name of the Mexican broker who facilitated the deal. It also reported that Mexico was NSO’s first major customer and the value of the company’s deal with Azano. For eight years, that article has been accessible online to anyone seeking to read it. Now they want to wipe the information away and lock the barn door after the horses have already bolted? A further irony is that they have not placed the original 2012 article under gag order or told Calcalist to remove it from its website. So it’s there for all to see.

I have railed many times about the utter pointlessness of the Israeli censorship regime. Not only does it shame Israel as a country claiming to uphold western democratic values; it makes the entire country a laughingstock. Israelis can’t learn basic facts about critical issues unless they read foreign media reporting on them. Though I must say that it provides a raison d’etre for this blog!

As a side note, currently Amnesty International and Israeli lawyer-activist Eitay Mack are suing NSO and the defense ministry demanding that the company’s export license to sell its dirty-ops products abroad be revoked given the damage it has done in numerous countries like Mexico, the UAE, and Turkey. Foreign media outlets have documented spying by government intelligence agents on journalists, human rights activists and their lawyers in Mexico; the hack of the cell phone of a leading UAE human rights activist which led to a 10-year prison sentence; and the murder of Saudi dissident journalist, Jamal Khashoggi. All of which involved the use of NSO’s Pegasus.

That 2012 Calcalist article was one of the first to warn of the danger inherent in NSO’s product:

The Ministry of Defense does not authorize sales to all nations, and it tends to authorize security exports only to countries with good security relations with Israel. However, the Ministry of Defense is less concerned with internal human rights issues in those countries, so there is certainly a possibility that eventually, Israeli technologies will be used by foreign governments to violate their civil rights.

In the current case involving Caspi, the court has acceded to a similar request from the defense ministry that it be conducted behind closed doors. In this way, the defense ministry acts as a facilitator of the lucrative dirty ops trade of NSO; and the Israeli courts serve as the rubber stamp to prevent the world from seeing the dirty laundry of the much-vaunted Start-Up Nation. Also worth noting that current IDF chief military censor, Brig. Gen. Ariela Ben Avraham has just resigned her position in order to head NSO’s communications shop. Thus she moves from covering up the Israeli army’s failures and war crimes to covering up the crimes committed using NSO’s technology.

Several months ago, Facebook discovered that its Whatsapp messaging service had been hacked and exposed the communications of 1,400 clients whose cell phones were targeted. The company is now suing NSO in federal court in San Francisco.

Broidy resigned from the Blackstone Group during the investigation in 2009.

AG of NY State: In the Matter of the Blackstone Group – January 2010

Globes News June 2014: On the verge of collapse, Markstone Capital Partners Group LLC CEO Ron Lubash has asked investors, who are set to lose hundreds of millions of dollars on their investment, for a $95 million capital injection.