Rudy Giuliani and his two partners in (Ukrainian) crime, Lev Parnas and Igor Fruman, enjoyed the mob equivalent of the Last Supper (in this case, lunch) at the Trump International in DC earlier this week.  After their boozed-up parting (after watching the video and their red-faced dishevelment, clearly they’d ‘had a few’), the two hopped on a plane with a one-way ticket back to Ukraine.  But the FBI intervened and they were apprehended and thrown in jail before they could make their get-away. 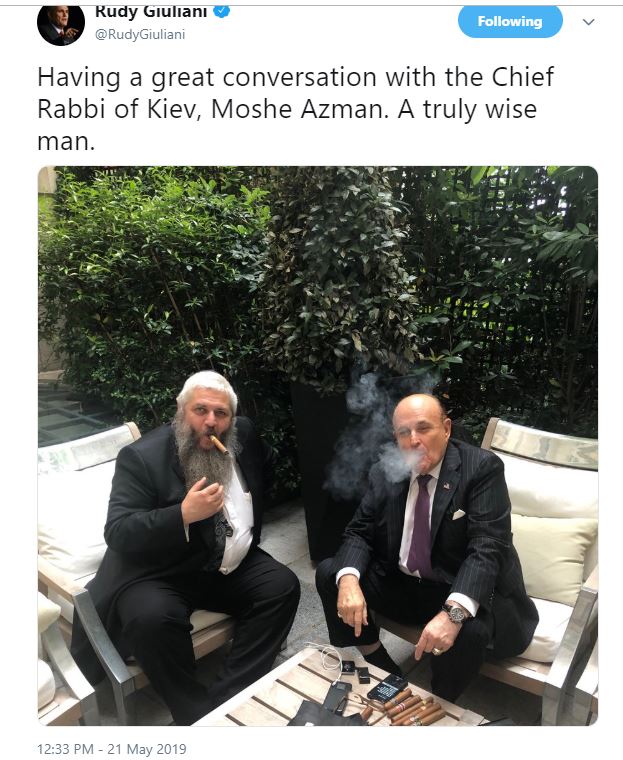 Before the lunch ended, the Three Musketeers filmed the bizarre video above, in which they addressed Rabbi Moishe Azman, the founder of the charity, the Anatevka Jewish Refugee Community, which created a real-life version of a fairytale shtetl, Anatevka, created by the Yiddish writer, Sholem Aleichem.  Anatevka was the Ukrainian Jewish village where Tevye and his family lived before they were driven away by anti-Semitic Cossacks and pogroms.  Though there apparently was a real place called Anatevka, it was a tiny village consisting of ten houses, according to one of its former residents.

In the video, you can hear Parnas say: “Anatevka is the best place in the world.”  Which is odd, considering that the fictional shtetl the chronicler of Jewish life in the Pale of Settlement invented was a place of ethnic cleansing and pogroms.  Azman’s Anatevka was established to offer haven to Jewish refugees displaced by the Crimea fighting.

During the video, Giulian addresses Rabbi Azman: “Moish, howya doin’ baby!” Maybe the way you’d address a mob boss. But not a rabbi.

The project to create a real-life Anatevka seems to be an odd philanthropic concept: a Fiddlerland in the Pale and revive Jewish rural life:

In May 2015, there was nothing there but a plot of muddy land and Rabbi Azman’s sincere desire to help. The surprising discovery of the Ohel (burial place) of Rabbi Mordekhai Tversky of the famous Chernobyl Chassidic dynasty conveyed the blessings of the Almighty Himself.  The village, called “Hnativka”, invoked memories of Shalom Aleichem’s Anatevka. So “Fiddler on the Roof” is back!

The Chabad rabbi behind the project appears to be exploiting (or helping, depending on your perspective) real Jews displaced by the fighting between Russia and Ukraine over Crimea.

Parnas and Fruman appear to be small-time wannabe Ukrainian oligarchs.  Not of the sort who buy $100-million penthouse apartments in Trump Tower.  But rather fixers and kibbitzers who do favors for the real oligarchs.  That’s why they’re clients of Rudy Giuliani, who gravitates to such small-time crooks and wheeler-dealers. 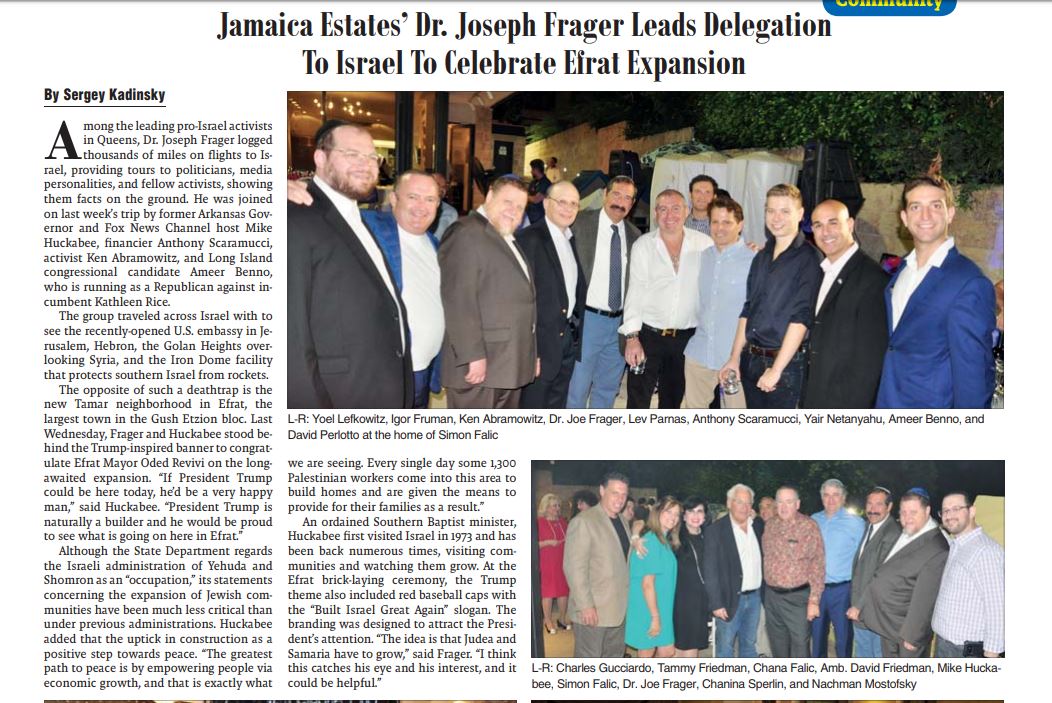 Parnas, Fruman and the Settlement Nexus

Parnas also inveigled themselves into a summer 2018 “pilgrimage” to Israel organized by Mike Huckabee.  Among those he partied with according to Haaretz were Yair Netanyahu, the prime minister’s foul-mouthed son, and Ambassador David Friedman, who’s pretty handy with a pickax at demolishing Palestinian homes.  He joined them at a festive gathering at the Jerusalem home of Simon Falic, owner of the world’s largest airport duty-free shop chain, and a mega-donor to Netanyahu’s political campaigns. According to the Queens JewishLink report featured (pdf) with the accompanying photograph, they were celebrating the expansion of the settlement of Efrat.  It was the first settlement established exclusively by American Jews, in this case by Rabbi Shlomo Riskin, formerly of New York’s Lincoln Square Synagogue.

At a ceremony celebrating the settlement’s new growth, Huckabee sent a “shout-out” to Trump:

“If President Trump could be here today, he’d be a very happy man,” said Huckabee. “President Trump is naturally a builder and he would be proud to see what is going on here in Efrat.”

…At the Efrat brick-laying ceremony, the Trump theme also included red baseball caps with the “Built Israel Great Again” slogan. The branding was designed to attract the President’s attention. “The idea is that Judea and Samaria have to grow,” said Frager. “I think this catches his eye and his interest, and it could be helpful.”

Parnas and Fruman were also honored with the Lover of Zion award by Young Israel, an Orthodox pro-settler group, at its annual fundraising gala.  House GOP leader Kevin McCarthy was another honored guest at this shindig.  He also received tainted donations from Fruman and Parnas.  Haaretz notes:

It’s not entirely clear why Young Israel gave Parnas and Fruman special recognition during that event, but one explanation offered by a senior figure in the organization was that the pair “brought Rudy Giuliani” to the dinner.

Is anyone surprised that the same sewer that Trump swims in would also dredge up Israeli settler boosters like Friedman, Netanyahu and Falic?  They are like an extended intercontinental mafia clan. But instead of engaging in organized crime, they engage in settler colonialism on the dime of U.S. taxpayers who subsidize this with IRS tax-deductions.

The mob. They help each other. Has tentacles that stretch. They think they own the world and either the rest of us are vulnerable fools (or asleep) or they are very careful to trod in well worn paths. ‘ cept Trump dragging his jewel Giuliani have stepped I to the wrong spotlight.

[comment deleted: I have a proper first name asshole. Use it or I ban your ass.]

Your best efforts aside, these two bagmen are only tangentially related to Israel.

BTW, neither of them look like ‘stand up guys’.

these two bagmen are only tangentially related to Israel.

Ah, so having Huckabee bring them with him to Israel, and inviting them to party at the home of Bibi’s biggest donor along with the U.S. ambassador, the PM’s son and a score of other major settlement donors is only “tangentially related to Israel?” Not to mention their attendance at the gala celebration of the expansion of an American-Israeli settlement. Who are you kidding?

They ARE bagmen, as you said. But not just for Ukrainian mobsters, but for pro-settler mobsters as well who dress in suits and are on first-name basis with diplomats and pro-settler oligarchs.

Lesson to be learned: Never leave a film or photographic trail.

So. Israel’s fingers extend to Ukraine, too. How sad for people in the Russian sphere who just want to work, raise families and live in peace. US/Israel make up a combo, now led by Trump and Giuliani, that continue to bring misery to everything it touches.

The bagmen had no connection to Israel until Huckabee gave them entree and got them into an ‘A list’ party.

The bagmen introduced Rudy to a ‘Friends of Whatever’, and Friends gave them a Friends award as payoff.

I am so done with this thread.

@Benyamin: don’t be an Idiot. They’re Ukrainian and Belarus JEWS. How do you think they got on the trip? By being good Christian evangelicals? No, they got their fellow American Jewish settler donors to include them. Minimizing their settler connection is pathetic.

@Linda
Re: Ukraine oligarchs, Netanyahu is sitting on the fence. Leading oligarchs are evenly divided along East/West and thus pro-EU and pro-Russia. For Netanyahu it’s a win-win position … Israel rightwing politics are indebted to the downfall of the Soviet Union. Capitalism won, Soviet communism was defeated, corruption gained a lot and spread over the Western States. Ukraine transforms from Blue to Red under leadership of actor Zelenskiy and apprentice Trump. Hopefully impeachment catches up … however we’re not fortunate with Pence.

[comment deleted: Since you are the current resident hasbarist, you have a new rule: no more than two comments in any thread. Violate that and this is the treatment you’ll get. I hate reading comments which repeat themselves and argue the same thing over & over. You just did. Don’t.]

[comment deleted: comment rules state clearly that complaining about my editorial decisions in the thread is off-limits. Don’t like the way I run my site, you know what to do.]

On the photo Ken Abramowitz … quite a character!

In 2008, the Israel Independence Fund was founded in New York. The nonprofits declared areas of activity are philanthropy, volunteering and distributing grants. The person behind the fund is Kenneth Abramowitz, a New York businessman and partner in NGN Capital, which describes itself as a venture capital firm dedicated to health-care investing.

Abramowitz is also national chairman of American Friends of Likud and donated thousands of shekels to the campaigns of Yisrael Katz and Yuli Edelstein in the last party primaries.

AFL: The time has come for sovereignty

“I am excited to be at this first conference of the Sovereignty series,” said guest speaker Ken Abramowitz, founder of SavetheWest.com, chairman of American Friends of Likud, and general partner and co-founder of healthcare venture NGN Capital. Addressing the topic of “How to Save Western Civilization From Itself,” he began with a three-minute talk on the concept of the need for devising a winning strategy in terms of national security, and then briefly discussed the key problems of Western Civilization (US, Europe, Israel, Christians and Jews) which is under attack from the “outside” and “inside” and needs different strategies for different problems.

Can’t get much better …