You can forget that claim you hear from Trump, Netanyahu and MBS that Iran is the greatest sponsor of state terrorism in the world. That award goes to Saudi Arabia hands down. First, it spent and wasted billions building up ISIS and arming it in order to topple the Syrian Alawite regime. It did so, at least in part, because its Shia arch-enemy, Iran, was supporting Bashar al Assad. The Saudis lost that battle. 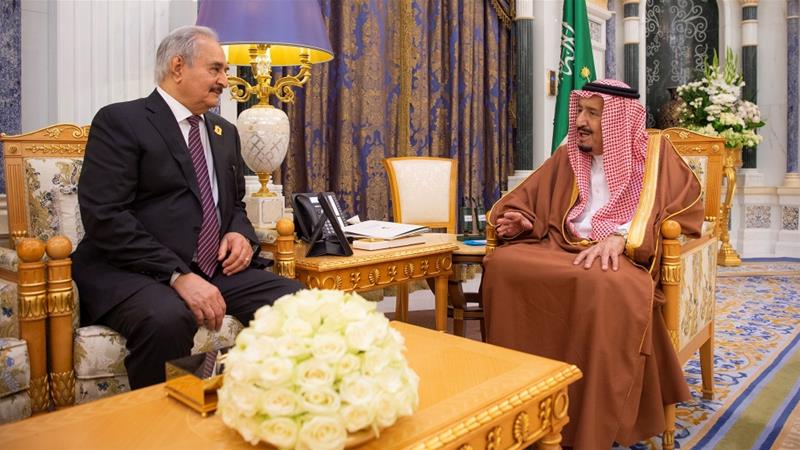 Then the Saudi meddled in Yemen when the Shia Houthis, supported by Iran, took the upper hand in civil war there. The result has been mass starvation and war-crimes involving the mass killings of Yemeni civilians, all thanks to the Saudi war machine there.

Now civil war in Libya and mass unrest in Sudan threaten to open a new theater of operations in which the Saudis can meddle. That’s why they’re giving the Libyan breakaway leader, Gen. Haftar tens or hundreds of millions and a blank check to overthrow the internationally supported government and install a friendly regime in Tripoli. Now, we hear word that the Saudis are worried about Iran meddling in Sudan, which just overthrew its 30-year dictator and installed a military junta. The tin pot generals who toppled Omar Bashir are themselves supported by the Saudis, who prefer leaders who rule with guns and bullets, rather than votes.

It will be interesting to see what develops in Sudan, where millions of protesters continue to take to the streets to demand the first democratic election there in over three decades. The army only offers a vague promise of such elections in “two years.” Which given the history of such coups in the Third World, means “never.” The Saudis have taken the side of the generals.

That offers Iran an opening:

In this desperate situation, Sudan could abandon its allies [the Saudis, etc.] and turn again to Iran for help. There’s no guarantee that Iran, itself in an economic crisis, would agree to aid Sudan, though this would provide it an opportunity to acquire another sphere of influence at a relatively cheap price.

If Iran does attempt to play a role it would likely side with the civilian protesters, if it sides with anyone. That would, of course, be ironic, considering that the Iranian armed forces served as a boot-heel to suppress unrest during the 2009 election. The IRG is not exactly known as a booster of democratic populism.

Add to this combustible mix the Israelis, who have become the sidekicks to MBS. The IAF has flown secret bombing missions on behalf of Haftar’s forces. Israeli agents are reputed to have murdered Iranian agents inside Libya as well. Wherever there is a regional dictator or kleptocrat who can offer Israeli something useful, there you will find Israel’s unclean hands, stirring the pot.

Israel has a strong interest in what happens inside Sudan, as in the past it has allegedly served as a transit point for Iranian weapons on their way to Gaza. Israel has secretly bombed targets in Khartoum associated with the Iranian military. It has intercepted vessels sailing in the Red Sea on their way to Sudan.

The Middle East is already a tinder box. There are potential ignition points everywhere. The Trump administration’s dysfunctional meddling, by siding with its corrupt strongmen al-Sisi in Egypt, MBS in Saudi Arabia, and Netanyahu in Israel, is but one of the incendiary devices capable of blowing this all to smithereens. Add to that the recklessness of Bibi Netanyahu who has toppled a decades-long status quo in favor of Israeli messianic fanatics who want a Greater Israel from the river to the sea, and a rebuilt Third Temple on a site sacred to all of Islam–well, that offers any number of possibilities for mass conflagration.

What role, if any, Iran will seek to play? Does Ayatollah Khameini have the stomach for deeper engagement in the region after consolidating Iranian success in Syria? Or will he be satisfied with that victory and restrain himself and his Revolutionary Guard forces from military alliances with insurgencies in other countries? Whatever role Iran chooses to play, it will more likely be reacting to Saudi Arabia’s blundering adventurism, inspired by the young prince, MBS, seeking to put his stamp on the region. It is that swaggering adventurism which poses the greatest threat to regional stability.

In a related alarming development, U.S. Secretary of State Mike Pompeo testifying before the U.S. senate, voiced an outright lie claiming that Iran has forged an alliance with al Qaeda. There is no evidence whatsoever to support this claim. But it is important for him to make it, because under 9/11 era legislation Congress authorized the U.S. to engage in military action against al Qaeda. This has been stretched beyond all meaning, as Bush and Obama both used it to target enemies only peripherally, if at all connected to the Islamist terror group. Exploiting the legislation to attack Iran would be a further travesty, but not at all out of character with an administration which has no respect for law or rights.

Sen. Rand Paul sought to disabuse Pompeo of the notion that he could get away with this sleight of hand:

Senator Rand Paul…pushed Mr. Pompeo to commit that the Trump administration would not attack Iran under a war authorization allowing the use of military force against Al Qaeda and other extremist groups responsible for the terrorist attacks of Sept. 11, 2001.

Mr. Pompeo demurred, saying he would “prefer to just leave that to lawyers.”

Mr. Paul…said he was troubled by Mr. Pompeo’s response. “I can tell you explicitly, you have not been given power or authority by Congress to have war with Iran,” he said in the exchange at a hearing of the Senate Foreign Relations Committee.

Mr. Pompeo pivoted, noting ties between Iran and Al Qaeda: “There is no doubt there is a connection. Period. Full stop.”

“Saudis can meddle. That’s why they’re given the Libyan breakaway leader, Gen. Haftar billions and a blank check”

Actually, the Independent article you linked says that the Saudi’s have, ‘pledged tens of millions’.

@Eunice: Good point. Will correct. But tens of millions is peanuts in terms of what it will buy. Haftar will need hundreds millions from those who bankroll him.

@ Eunice: So you think that Haftar would commence a major offensive costing tens, if not hundreds of millions of dollars without funds in hand to do it? BTW, either you’re pimping for the Saudis, or Haftar, or just trying to take feeble potshots at me. Which is it?