Tonight, another one of those stranger-than-fiction spy yarns that seem all too common for Israeli intelligence.  It begins with the last days of the Shah, when he appointed as prime minister, Shapur Bakhtiar.  After the 1979 Revolution, Bakhtiar went into exile and ended up in France.  In those days, bloodletting was fierce both within Iran, where the MeK and regime murdered tens of thousands of their respective enemies; and outside, where regime assassins traveled the world attempting to eliminate enemies of the State.  One of these was Bakhtiar, whose family was targeted numerous times for kidnapping or death.  During one failed attempt, two French policemen were killed and a neighbor was also murdered.  Shapur’s grandson, Jahanshah, was in the apartment and describes his horror at seeing a corpse for the first time at such a young age.  Later, in 1991, the regime succeeded in killing his grandfather.  As a result, his every waking moment since then has been devoted to getting revenge.

To that end, he volunteered himself as an agent for the CIA and was trained by its Middle East station chief.  They created a narrative that would persuade the Iranians to trust his political conversion.  But given the young Bakhtiar’s traumatic personal history, it’s almost unfathomable that Iran was fooled when he presented himself as a businessman who would do sanctions-skirting deals that would provide hundreds of millions for Iranian nuclear and military projects.  Admittedly, he offered a highly desirable commodity, cold hard cash by the truckload.  It’s easy to be fooled by someone with a good story when you desperately need what they are selling.  But shouldn’t that have caused more than a little skepticism: if a deal appears too good to be true, it is.

I haven’t read his new book (French), which would explain Bakhtiar’s segue from working for the CIA to working for the Mossad (Hebrew).  But at another point, he met an Israeli in Africa and offered himself as a spy on Israel’s behalf.  With his Mossad handlers he created another identity, with his cover as a businessman selling excavation equipment.  He was sent to Turkey where he began recruiting young Iranians for covert operations.  To test their mettle, he would send them to the border where he’d ask them to surveil Iranian transports carrying goods into Iran.  If they passed this test, he passed them to a Mossad operative who trained them to become assassins.  Bakhtiar claims that six of his recruits were key figures in the assassination campaign waged by the Mossad against Iran’s nuclear scientists, which killed five of them. 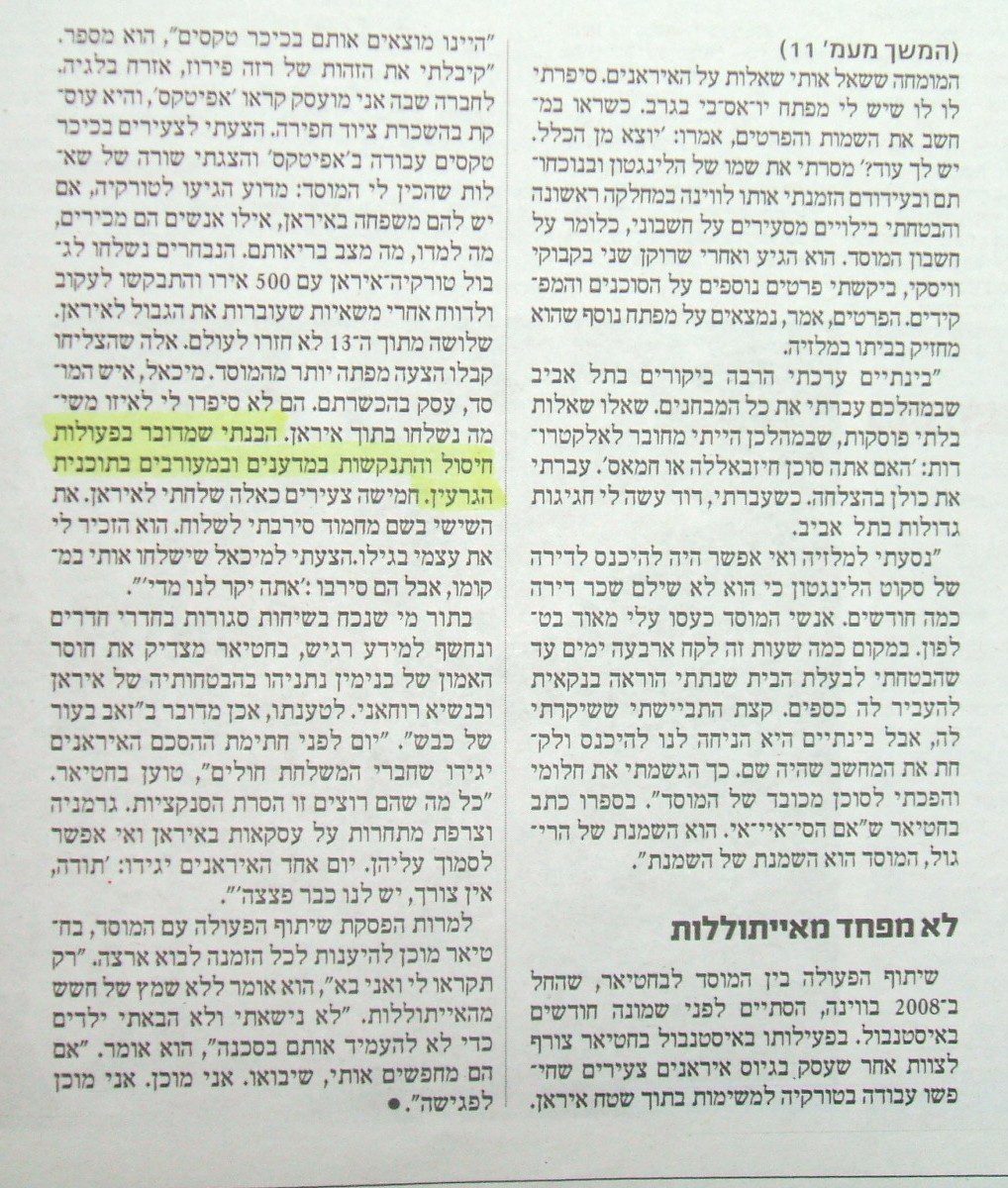 The Post report recounting the exploits of Mossad agent, Bakhtiar

My Israeli source confirms Bakhtiar’s claim to be a Mossad agent and his role in Turkey and the assassinations.  I remember when I reported the assassinations and was one of the few journalists who initially would say definitively that the Mossad (and MeK) were collaborators in this deadly project.  At the time, some doubted native Iranians would’ve participated in such a campaign.  But Bakhtiar, if his claims are to be believed, provided the key ingredient that allowed the Mossad to do precisely this in Turkey.

Two developments shut down Bakhtiar’s operation: the first was the Obama administration’s order to Israel to stop killing Iranians and end the Stuxnet-type cyber-attacks on Iran’s nuclear facilities.  The second was Turkey’s exposure of the Israeli spy operation.  Coming on the heels of Israel’s disastrous Mavi Marmara massacre of ten Turkish citizens, the exposure of the spy den made it even harder for Israel and Turkey to reconcile.  Even four years after the attack and one year after the blow-up of the spy ring, the two countries seem almost as far apart as ever (despite periodic murmurings that a rapprochement is imminent).

Bakhtiar is a man without a cause, or more properly a man without a paymaster.  He’s been cut loose by the CIA and Mossad (though in the accompanying Post article he pathetically offers himself once again for any mission the agency might have for him).  This book and accompanying promotional campaign will offer his the self-validation he desperately seeks.  Before he could claim he was a warrior for the old regime.  Now, he’s a footnote of history.  Largely irrelevant.  Soon to be forgotten.

Finally, if I hadn’t actually heard from my source that he was a Mossad agent, Bakhtiar’s rabid anti-regime rhetoric would leave me highly skeptical that he could persuade anyone he was actually an ally of the regime.  He calls Ayatollah Khamenei a “psychopath.”  He natters on about Iran’s most devout wish being to become a WMD state.  His political views are about as reactionary as they come.  He’s clearly still a Shah-acolyte, whose devotion is fueled by extreme bitterness at the price he and his family had to pay for such devotion.

It’s no accident that Israeli media are showing Bakhtiar the royal treatment.  For years, Israeli intelligence rolled out the red carpet for Iranian agents like Bakhtiar.  I’ve written about a few of these characters here.  It appeals to an Israeli population eager to be deceived about the nature of contemporary Iran and its government.  A nation full of uncertainty, fear and insecurity like Israel grasps at straws when it comes to identifying friends.  When it finds them it latches onto them and holds on for dear life.  The truth is that these dubious figures are all emigres for whom the real Iran is a distant memory.  They filter Iran through a gauzy nostalgic haze of recollection and rumor.  They know about as much about today’s Iran as I know about brain surgery.  It is truly a shame that Israelis see these people as authentic representatives of Iran.  They are frauds, just as Israel’s current approach to Iran is an ineffectual fraud.

Nice to confirm what would have been widely suspected. Mossad and/or CIA “done it”. But was a crime committed? And under whose laws?

It is an odd world, no?, when all countries decry crime — but all countries (rich enough?) deploy criminals employed directly or indirectly by their so-called “defence”, “intelligence”, “police”, and other parts of their “security” apparatus.

Is assassination a crime? Is it terrorism?

Assassination is a crime, generally, where done, even if not regarded as a crime in the place from which it is ordered to be done and paid for to be done. But if a country’s own agents do the assassination, then is it a crime in that country? (USA has refused to prosecute our torturers. Torture is formally a crime in the USA’s laws. Does its criminal nature depend on where it is done?)

The “is it a crime” question more-or-less assumes non-overlapping jurisdictional territories. It is a crime where done but not where paid for. But jurisdictions (by which crimes and the possibility of punishing them judicially are legally defined) are funny things.

USA seems sometimes to expand its so-called criminal jurisdiction to cover the whole world so that “terrorism” if practiced (or planned or contemplated) anywhere in the world is a “crime” punishable in USA’s courts. This means that an assassination — possibly characterizable as “terrorism” under some USA laws — might also be not-a-crime in the USA because the assassination, although “terrorism”, was done by USA’s “defense” or “intelligence” or “police” or other “security” apparatus. (And, of course, a decision to non-prosecute a crime sort-of makes the crime not-a-crime.)

All this makes me not a little uncomfortable.

“…cover the whole world so that “terrorism” if practiced (or planned or contemplated) anywhere in the world is a “crime” punishable in USA’s courts.” Actually, the USG can do without the courts altogether. As I understand NDAA albeit poorly, US jurisdiction extends to any “belligerent” act against the US or any of its allies by virtually anyone including American citizens loosely aligned with unsavory groups LIKE Al Queday and the Taliban, “like” these groups. Such terrorists may be apprehended and jailed without charge, transported anywhere the USG likes or assassinated without benefit of due process.

A number of assurances have been offered to Americans from the House and from Obama that US citizens will not be so treated under NDAA. These assurances are offered however in lieu of plain language in the legislation excluding US citizens, period. Why? Obviously, the assurances are unreliable and intended to assuage only the gullible.

The chances that CIA and Mossad will recruit the same person to work for them are equal to the chances you will write your next blog story from Israel.

This story – despite what your source states – lacks any credibility.

@ Nonsense: No, it’s not. In fact, the only reason you know I published inaccurate information is because I told you so. Which is more than I can say for you. Readers here have proven your claims false & not a word from you to correct the record.

You have been moderated. Snark by the likes of you is not acceptable. Opinions devoid of facts or evidence, such as what you offered, violate the comment rules. I offer a source proven accurate over scores of report. You offer nothing but snark.

So then the MEK was not involved? Or did the MEK work with Bakhtiar?

I’m sure the MEK was involved. They provided support inside Iran.