A funny thing happened to Bernie Sanders on the way to the 2020 Iowa presidential caucus.  That state is the first real race in the nomination process, and a critical opportunity for candidates to make their mark before Democratic voters.  Sanders was doing well in the polls and appeared he might even win.  This sent the Democratic establishment into a tailspin.  The idea that a self-avowed democratic socialist might take the contest and possibly the nomination was alarming to them.  He had to be stopped at all costs.

Then the attack ads began airing on local TV and radio.  They included red-baiting (“he’s a socialist); ageism (he’s too old); and patronizing (“he can’t win swing states”).  Who was behind the new ad assault? It was a new PAC, the Democratic Majority for Israel (DMFI).  It ended up spending $1-million on its smear campaign. Despite this, Sanders came in a dead heat for the top spot with another candidate, Pete Buttigieg.

None of the ads mentioned Israel, ostensibly the major issue for DFMI.  Instead, they pretended to be speaking on behalf of moderate Democratic voters concerned about Sanders’ electability, along with bread and butter domestic issues.

Except, DMFI wasn’t what it purported to be. It was a stalking horse for the nation’s most powerful lobbying outfit, Aipac.  Not to mention that much of its funding came not from Democratic donors opposed to Sanders, but from GOP billionaires. 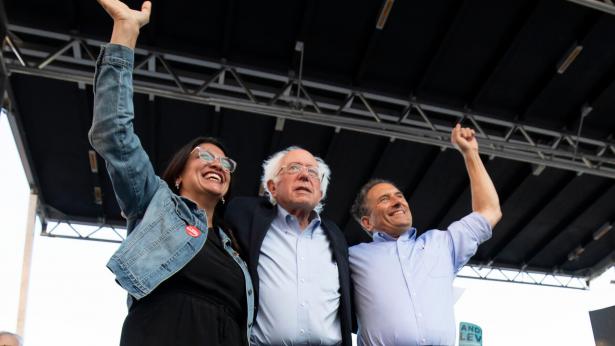 Aipac’s Goal: Destroy the Progressive Wing of the Party

This was the opening salvo in a systematic campaign to destroy the surging popularity of Democratic progressives.  Once Sanders withdrew from the race, Aipac and its partner, DMFI turned their sites toward the 2022 mid-term elections.  Their strategy became bolder and more aggressive.  They wouldn’t be satisfied with targeting a few key campaigns.  Instead, they would create a series of stealth PACs all pretending to be affiliated with the Democrats. Then shower millions on their chosen moderate candidates.

Curiously, they didn’t approach the typical Democratic donors to fund this effort.  Instead, they reached out to GOP billionaires who’d donated tens of millions on behalf of Republicans.  Some of the wealthiest were Bernie Marcus, founder of the Home Depot hardware chain, Paul Singer, a Wall Street hedge fund manager, Bob Kraft, owner of the New England Patriots football team, and Stacey Schusterman, heiress of an Oklahoma oil fortune.  All are Jewish and all known for not only for being pro-Israel, but for supporting the extreme right-wing policies of its government. 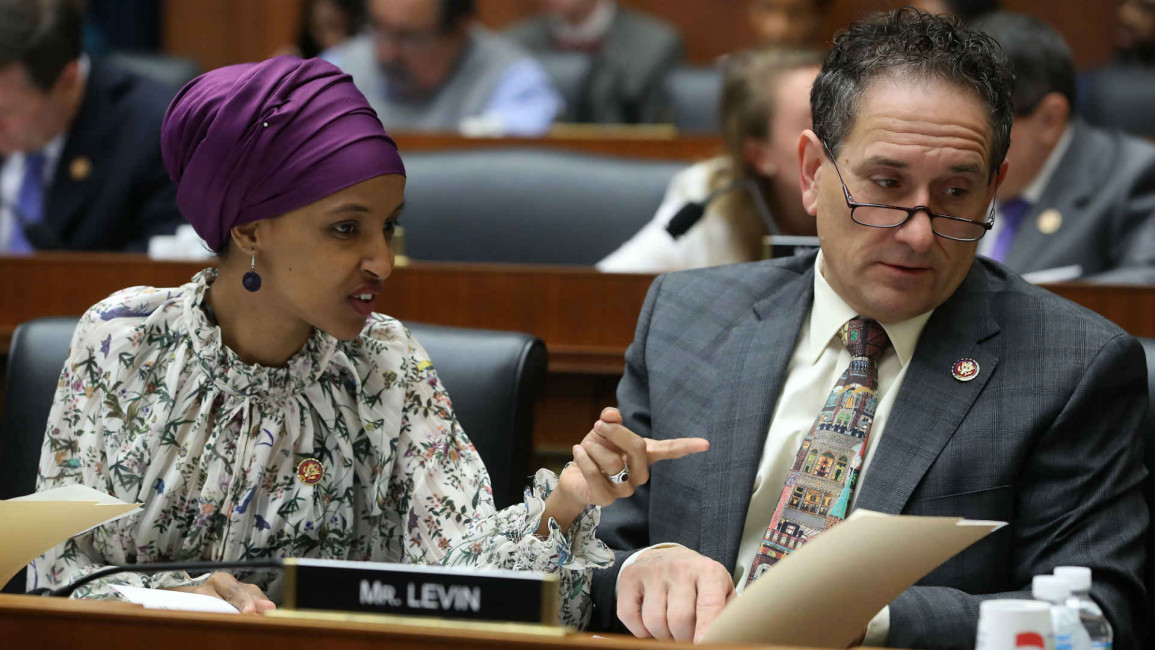 Yet another reason Aipac targeted Andy Levin: Muslims and Jews can’t be allies

In addition to DMFI, Aipac cloned the United Democracy Project and Mainstream Democrats.  And it did something it had never done before: it created its own PAC to funnel cash into these Democratic races.  Altogether, these groups have spent nearly $30-million on a score of races.  The candidates targeted are progressives, mostly aligned with Bernie Sanders.  But they are by no means radical.  Though many support Palestinian rights, none are anti-Israel.

In fact, they are targeted for the slightest misalignment with Aipac’s legislative priorities.  For example, Congress is considering legislation which would combat the Boycott Divestment Sanctions movement.  The latter is a non-violent campaign on behalf of Palestinian rights, which Israel’s president, Issac Herzog, labeled a “a new kind of terrorism.” The Israeli government considers it an existential threat.  Many Democrats–and most Democrats oppose BDS–bristle at the anti-BDS legislation because it would penalize Americans for political speech, and violate the First Amendment’s guarantee of free speech.  When a number of Democrats spoke out against the legislation, it put a target on their back.

For others targeted for defeat, the “sin” was speaking out too forcefully for the two-state solution. A policy ostensibly favored policy of the US government for decades.  Rep. Andy Levin, who was doused with $4-million in Aipac attack ads, is the most liberal Jewish member of Congress.  Like most Jews there, he calls himself pro-Israel. But he hds the temerity to sponsor a bill endorsing two-states, while calling for US aid to Israel to be calibrated to Israel’s adherence to international law. In other words, Israel’s ongoing effort to build hundreds of thousands of new housing units in the Occupied West Bank, along with scores of new settlements, could cause a reduction in US aid.

This was a red flag for the Israel Lobby.  But even worse was Levin’s alliance with the most progressive members of Congress, called The Squad.  It consists of nine members, mostly women of color who have espoused a left-wing legislative agenda.  Among them are Alexandria Occasion Cortez, Rashida Tlaib, a Palestinian American, and Ilhan Omar, a Somali-American Muslim.  Omar and Tlaib, in particular, have taken on the Israel Lobby and attacked its stranglehold on Israel-Palestine discourse.   For this, they’ve been pilloried as anti-Israel and even anti-Semitic.

The candidates Aipac chose to attack included LGBTQ, African-Americans, Muslim-Americans and even Jews.  Choosing them as targets reeked homophobia, misogyny, Islamophobia and even anti-Semitism.  These campaigns were filled with lies, distortions and veiled hate speech.  All in the interest of promoting the power of the Lobby and laying its enemies low.  The message is: you cross the Lobby and your days are numbered.  It’s naked aggression and bare-knuckles politics.

But Aipac is not unbeatable. In fact, there were a number of progressive victories in campaigns where it invested millions and came up short.  Rep. Tlaib, who represents a heavily Arab-American district in Detroit, held off several challengers and easily won her nomination. Pro-Israel PACs initially offering funding to her opponents, but gave up when her victory seemed assured. In Pennsylvania, a progressive African American woman, Summer Lee, was targeted for defeat.  Despite spending millions supporting her opponent, she eeked out a close victory.

Aipac spent $4-million to defeat a wealthy Indian-American progressive, Shri Thanedar in another Michigan district. But he appears to have won a closely contested race. The main reason he outlasted his Lobby-funded opponent was that he was able to match the attack ads dollar-for-dollar.  Unfortunately, the only way to beat back these efforts is to have the funding to respond aggressively to the mud that is slung.  Some candidates can self-fund their races. Others have an enormous following and charisma like AOC and Sanders The can raise hundreds of millions from small-donors.  But that leaves out working class progressives who cannot surmount these obstacles.  And that’s the tragedy of the corrupted US campaign finance system.

Returning to the Squad, when its members swept into Congress during the 2018 election cycle, they created a tsunami within the Party.  They were outspoken. A number of them had defeated powerful white males who’d served in Congress for decades.  They promoted “radical” programs like the Green New Deal and Medicare for All heath care reform, among others.  Most alarming of all for Aipac, was their willingness to break with longstanding Democratic fealty to the Lobby and Israel’s interests.

The emergence of the Squad was the catalyst which aroused the ire of Aipac and prodded into action.  Its first foray was the Sanders campaign, mentioned earlier.  But in the current election cycle it has come into its own.  It spent $6-million to defeat a Maryland African American woman, Donna Edwards.  It spent over $1-million to defeat a Texas progressive Latina, Jessica Cisneros, who ran against a man who’d spent two decades in Congress, and was the only Democrat who opposed abortion rights.  It even spent millions in a failed attempt to defeat another Jewish-American woman running in southern California, Sara Jacobs.  A key reason they failed in her contest was that she was able to match Aipac’s spending dollar for dollar as the daughter of the wealthy founder of a major technology company..

The only progressive Jewish counter to this devious strategy is several PACs which are raising funds to support those bearing the brunt of the Lobby attacks.  Among them are J Street, Bend the Arc and Jewish Voice for Peace.  But their fundraising is a pittance compared to the tens of millions flooding these primary races from Aipac.

Aipac’s strategy is cynical, devious, and toxic to American democracy.  It pounds yet another nail in the coffin of the country’s electoral system.  It confirms that money buys not only elections, but Congress itself.

There is another way to stop these dirty tricks: the Party itself should prohibit all Democratic candidates from taking money from these PACs and any others Aipac might launch.  Anyone who defies the Party should suffer penalties, including a cut-off of campaign support.  But it’s doubtful the Party leadership in Congress will take action. Its interest is in electing Democrats.  It doesn’t care which ones.  And that adds yet another tragedy to this sordid tale.

Comments are published at the sole discretion of the owner.
Subscribe
1 Comment
Oldest
Newest Most Voted
Inline Feedbacks
View all comments

beware do not dare criticize aipac trough you’ll bare the risk of being tilded antisemite or as the ultra orthodox preferred adjective nazi
and those “select few” who are entitled to feed at the trough shall have the eternal right to pass laws calling anyone antisemite who dares brake gas with any jewish connototation
they give the ultra right absolute justification for , not anymore claiming, but putting out in the clear the enormous power jewish people have over their lives
the more aipac keeps at the whack a mole the more moles whack resistant will appear
the more aipac tries eradicating ultra nationalist the more arms they give them to prove their point.
same as in israel , israel can murder billions of islamic jihad leader the more the idea will flourish, will never learn you cant kill ideas, you have to teach them otherwise then again israel is not into teachings at doing the right thing, not anytime soon