Seder and Covid in quarantine

Everyone who’s ever enjoyed a Passover seder knows how wonderful they can be: rousing singing, the story of liberation from bondage, the all-embracing welcoming message inviting “all who are hungry to come and eat.”

This story of joy and redemption begins with the immense suffering of the Jewish people during their centuries of bondage in Egypt.  You catch a glimpse of this in the story of Moses, as a young Egyptian prince, who intervenes as a taskmaster flogs an Israelite slave making the bricks for the pyramids (or so the story goes).  In a fit of rage, Moses beats the slave master and kills him, leading to his flight to Midian. Every Jew takes pride in this act of courage and resistance in the face of injustice.  Every Jew takes pride in this act of vengeance in return for those centuries of suffering.

But it doesn’t end there: God exacts tremendous suffering on the Egyptians before their leader, Pharaoh, relents and permits the Israelites to leave. There are the ten plagues which decimate the Egyptian economy, pollute the environment, wreak havoc with farming and food production, and ultimately kill all the firstborn children including Pharaoh’s own. Must our joy exact such pain on our nemesis?

These plagues are what brought me to write this.  We now face our own modern plague.  Our own leaders seem no better prepared to confront it than Pharaoh millenia-ago.  But the main difference is that at least with the ancient plagues there was some ultimate purpose in all that suffering.  It, according to the Haggadah, was necessary to compel the Egyptians to loosen their grip on their slaves.  For, we know that no master ever gives up power willingly or because justice demands it. Remember Douglass’ memorable phrase: Power concedes nothing without a fight. It never did and never will.”

Today, Covid19 seems to have no silver lining.  Unless felling Boris Johnson–who downplayed the contagion for weeks and thought “herd immunity” and hundreds of thousands of dead Britons was a suitable response–was a proper comeuppance. Covid19 is pure suffering.  It has taken some of the best of us: Holocaust survivors, doctors and nurses, mothers with young children, sublime musicians like John Prine and Bill Withers, and artists like Terrence McNally. 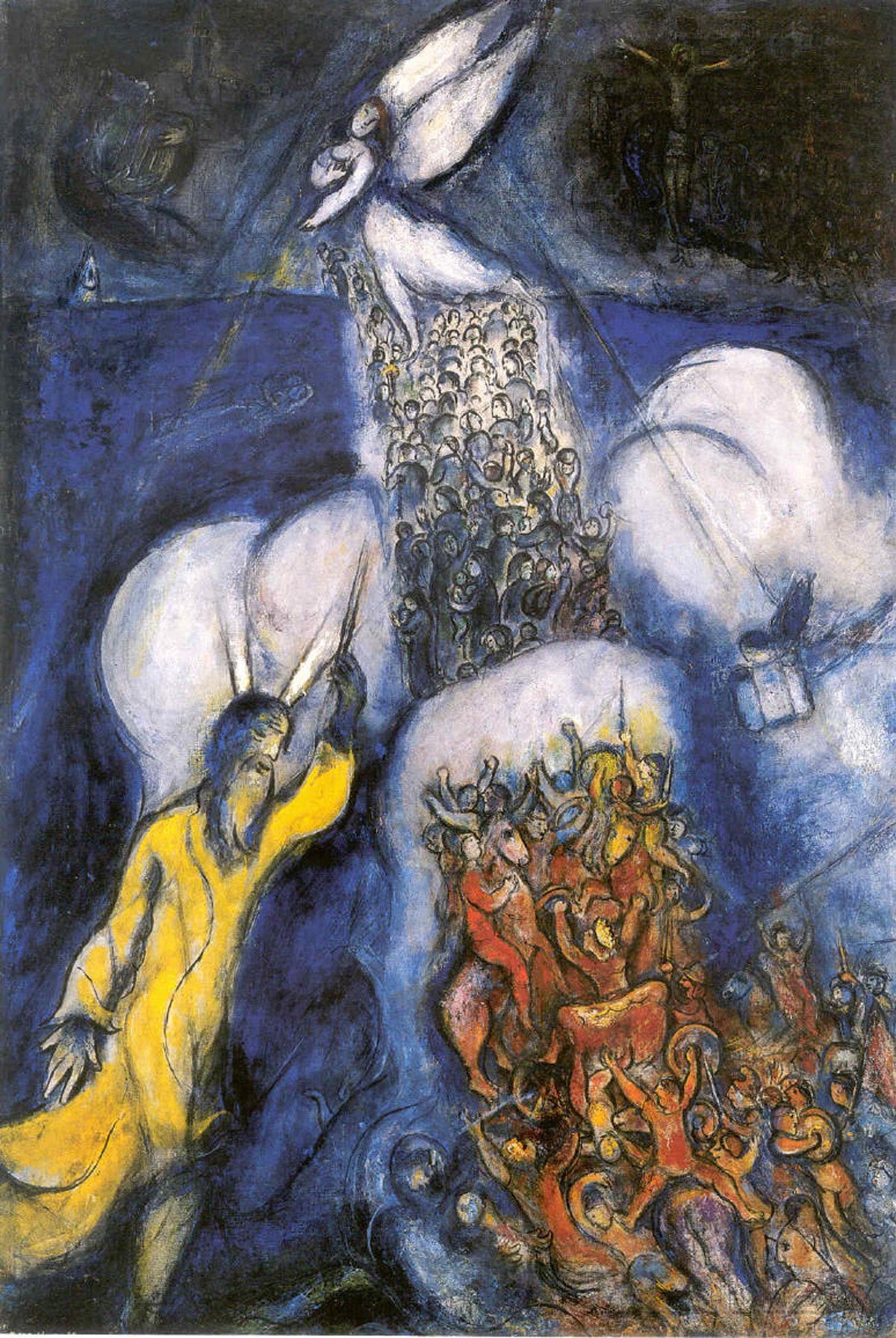 God silences the angels at the Red Sea  (Marc Chagall)

Returning to the Passover story, the suffering of the Egyptians did not end with the plagues. In another bout of revenge, the Israelites were told to borrow valuables and jewelry from their Egyptian neighbors.  Essentially they were securing reparations for their enslavement by looting their fellow Egyptians. They took the valuables with them as they left and never returned them.  Though one can understand the motive of revenge, can one justify this act of pillage?  The only thing that is remotely positive about this element of the narrative is that those who created this Biblical account of the exodus did not spare the Israelites.  Their behavior is shown warts and all.

And in the closing of the narrative, Pharoah once again has a change of heart, and revokes his permission for the slaves to leave.  As they mass to cross the Red Sea, he mobilizes his horsemen and chariots and pursues them.  The Bible recounts the seeming miracle of the waters parting for the Israelites to pass through.  They are pursued into the Sea by Pharaoh’s army.  Just as the fleeing slaves reach the far shore, the seas close and drown the thousands of soldiers who are in hot pursuit.

The Midrash says that as the Egyptians were drowning, the angels (definitely pro-Israelite in this telling) rejoice and sing as the Israelites make their way to freedom.  God scolds the angels and tells them to stop their celebration: “How do you sing when My creatures are dying?!” It is a rare bit of compassion from a God who until then appeared to revel in the suffering he inflicted on the Egyptians.

In yet another troubling portion of the Haggadah, near the end of the Seder the guests recite this passage, invoking God to “to pour out Your wrath upon the nations.” This is yet another form of vengeance for the centuries of suffering inflicted on Jews by enemies, whether Egyptian or European Christians.  Crusades, Inquisitions, auto da fes, Holocausts–all have left their mark on the Jewish psyche.

The final, troubling question remains: why is it that our liberation must come at the expense of the suffering of others?  Given that they have made us suffer–does that mean that our redemption can only be achieved through violence?

And if our freedom comes at the cost of the mass suffering of others? What happens when we become the taskmasters and are responsible for the suffering of another people? Do we not think that as the masters of another people, they will inflict the same hate and violence upon us?  And justify it in the same way the Haggadah does?

My sadness lies in the obtuseness of the latter-day Israelites in realizing that they are enslaving another people.  And that both peoples are inflicting immense pain on each other.  The only way to end the cycle is for the masters to recognize the injustice they perpetrate and end it.  If they don’t, then they will suffer the same plagues and misery the Egyptians did.

DONATION: If you have already donated to support Covid19 response, might I ask you to contribute as well to support the work I do here? It’s a mitzvah of the first order. The sidebar has links to PayPal and Network for Good (for tax-deductible online donations). I’m grateful for your solidarity.

“What happens when we become the taskmasters and are responsible for the suffering of another people?”

The irreducible fact, is that it was the local Arabs who started the cycle of violence when they drew ‘first blood’, and began murdering innocent Jews in Jerusalem during the Nebi Musa pogrom.

Today marks the 100 year anniversary of the Nebi Musa pogrom.

@ Lemontree: Now Jewish Virtual Library has become a credible historical source for Jewish history? Since when? Written by a former Aipac staffer and funded by major Aipac donors. This is your historical source? Afraid not.

As for the history of Jewish-Palestinian violence: you neglect the fact that thousands of Jews made aliyah from 1880 on and flooded into Palestine. Most of the newcomers knew nothing about the indigenous communities and treated them with indifference or outright disdain. Did you think there would be no tension between the communities?

I know the early history of this conflict cold; who’s donkey strayed onto whose field, who swiped some grapes off of who’s wagon.

You will lose the historical argument with me, because facts, Richard, are stubborn things.

Have a good Pesach.

@ Lemontree: Really? So I suppose you were there when the grapes were stolen and the donkey strayed? Either you are over a century old or you’re a fraud. Your ‘facts’ are bullshit. And don’t you dare try to go toe-to-toe with me on this subject or any other. I’ll wipe the floor with you. So many have come before you here with the same cocksure attitude and all have ended up in the dustheap. The fact that you’ve chosen Jewish Virtual Library as your source on this subject tells us all we need to know about your “knowledge” of the conflict.

Facts are very stubborn things: like the fact that the massive presence of new Zionist colonists in Palestine starting in the 1880s led inevitably to the violence and conflict that followed. And the cluelessness of many, if not most of these colonists made this inevitable. That’s a fact. An inconvenient one for you, for sure.

[comment deleted: I told you not to respond further in this thread. You defied me. You are now moderated. If you decide to continue posting, your comments will only be approved if they respect the comment rules. And the next comment that doesn’t will lead to banning.]

You write so often about how great is Judaism and how it teaches love and tikun-olam.
But I guess it isn’t the full picture as you explained in this post.

So are these ‘Judeans’ who misrepresent Judaism or is it you who try to convert the religion into some present day progressive heaven when (in your eyes) it is truly backwashed, primitive culture based on hatred and violence.

You write so often about how great is Judaism

Not much in this comment has anything to do with me though it claims to. First, I don’t write that often explicitly about Judaism, though much of what I write implicitly does deal with Judaism. I’m not sure I’ve ever said that Judaism was “great,” though I have expressed my appreciation for those things I admire about it (and my criticism of what I don’t). I don’t think I’ve ever said that it teaches “love.” Though I’ve certainly said it teaches justice and tolerance.

I guess it isn’t the full picture as you explained in this post.

If you read my post you’ll note that one of the powerful aspects of the Bible is that it doesn’t paint the forefathers and foremothers as saints. It paints them as human beings prone to courage and heroism; and prone to pettiness and even mass murder. This makes the book itself and tradition it represents even more real and human.

So are these ‘Judeans’ who misrepresent Judaism

My Judaism is not a “conversion” of anything. It is true to the letter and spirit of the Bible and its traditions. My Judaism doesn’t proclaim itself as rooted in hatred and racism as yours does. It is not based on power or brutality as yours is.

it is truly backwashed, primitive culture

I never said or wrote that Judaism is “blackwashed” or “primitive.” You did. Judaism is a religion based on human beings as I’ve already written above. It is not a religion of perfection. That is what makes it great.

Since you appear to believe your religion and forefathers were perfect, you might want to pay a bit of attention to stories like the rape of Dinah and the mass murder which followed; or the civil war and genocide against the Tribe of Benjamin; or the genocide by the Israelites against the Amalekites, Edomites, Jebusites, etc in their conquest of the Land of Israel; or the cruelty of Abraham expelling Hagar and her baby from his family into the desert wilderness; or the cruelty of Joseph’s brothers selling him into slavery.

I am grateful to the authors of the Bible for presenting the history of my people, warts and all. It makes me much more able to embrace it since it is fair and transparent. It also gives me food for thought about the sins and imperfections of my religious tradition. Every believer should question their beliefs and their tradition. A critical believer is much more powerful than an uncritical one.