Hey, we all know Donald Trump is a borderline personality.  We know about the serial outrages he perpetrates against truth, history, and the English language.  But his recently announced trip to the Middle East is a new ‘achievement.’  I don’t know whether to call it the summit or nadir of insanity.

When he visits Israel, he plans to speak at Masada.  That is the royal Israelite fortress in which Jewish militants holed up at the close of the second Roman rebellion.  Due to meticulous preparation and technological ingenuity, they held out against a far superior Roman force for over a year.  Finally, when the Roman’s launched their climactic assault and the cause was hopeless, the historian Josephus wrote that the leader of the militants, Eleazar Ben Yair, convinced everyone to commit suicide rather than be captured alive.  They knew that the Romans would likely parade them before their fellow Israelites in chains and then crucify them as an example of what happens to those who rebel against Roman power.  Rather than face such humiliation, they determined to control their own fate.  Thus they marched into the annals of Jewish (and Zionist) history.

It’s clear why this ‘myth’ (there has been no historical or archaeological evidence that supports Josephus’ account) resonates so deeply in the Israeli psyche.  Many nations and religions have such foundation myths of leaders making the ultimate sacrifice on behalf of a great principle.

It’s less clear why Trump chose this venue to address the Israeli people.  Other presidents have accepted what was formerly the ultimate honor, addressing all of Israel in the rostrum of the Knesset.  Barack Obama, denied this privilege as punishment by the Netanyahu government, had to resort to addressing Israel in a concert hall.  But Masada?  No president has ever chosen this as a venue to address the Israeli people.  I don’t even believe any Israeli leader has made a major speech there.

To add to the oddity of it all, six years ago Trump inquired whether he could use Masada as the venue for his Miss Universe Pageant.  Thankfully, someone in Israel thought it not the wisest choice.  Now he plans to bring 1,000 of his closest friends with him on this junket.  Too bad he doesn’t have a Trump hotel in which to house them all in either country (though not for lack of trying in Israel), 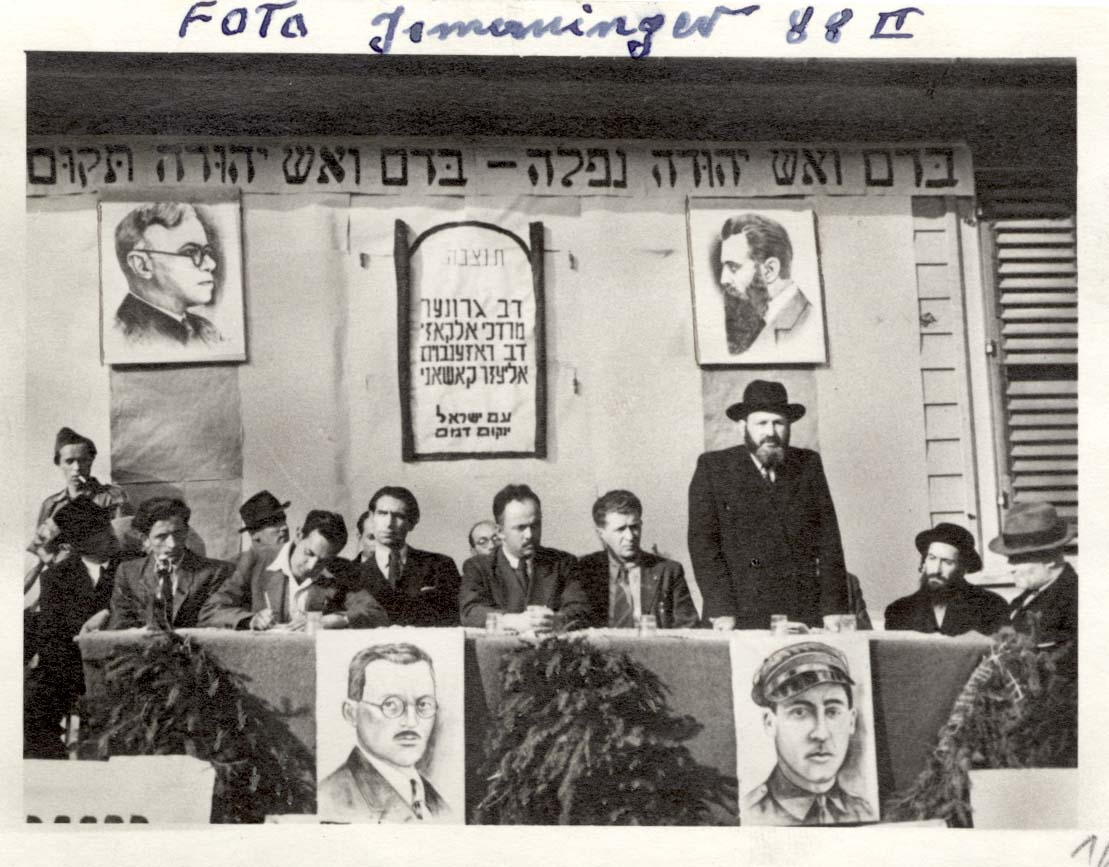 What will he talk about?  How national self-suicide is an admirable destiny?  How Israelites launching a hopeless rebellion against the most powerful nation in the known world was a good career choice?  No doubt, Trump will trot out some noble sound bytes about Jewish bravery and self-sacrifice.  That will dramatize the occasion.  He will recall the IDF swearing-in ceremonies all recruits endure as they complete their military training.  Maybe he’ll even quote the proverbial Revisionist slogan: “In blood and fire Judea fell, and so will it rise once more.”  This slogan too reinforces the notion that Israelis, according to the rightist version of Jewish history, must die in large numbers and the nation must suffer prodigiously in order to vanquish its enemies.  This is a myth that has fueled much bloodshed and suffering over the decades of Israeli history.  It will be a myth Trump will only be reinforcing.  That’s why it’s an absolutely terrible idea.

But of course, his advisers, David Friedman and Jason Greenblatt are settlerists whose entire being resonates with Revisionist slogans.  For them, this speech at this place will be the ultimate spectacle.  But for me, it will have all of the pageantry of Hitler at Nuremberg.  It will mean an American president will be reinforcing all the worst nationalist impulses of the Israeli body politic.

Frankly, I’ve never heard of political speeches delivered at Masada.  Not even by Israeli prime ministers.  It’s a place considered above politics.  A place that is hallowed ground.  Permitting Trump to speak there would be like permitting Michael Corleone to deliver a homily at St. Peter’s, or like permitting Coca Cola to shoot a commercial at Arlington National Cemetery.  In fact, has any political figure delivered any speech at Arlington?  No.  The very thought is unthinkable.  Even at the tomb of the Unknown Soldier a president lays a wreath while eschewing politics.

Consider this anomaly, when Bibi Netanyahu comes to the U.S. for his next visit, Trump arranges for him to speak not even to a Joint Session of Congress; no, he’ll speak at Gettysburg and recite the Gettysburg Address in Hebrew.  Or he’ll speak at Valley Forge and echo George Washington.  The very idea is ridiculous and self-evidently so.  How is it that neither Bibi nor Trump’s minions have recognized how completely inappropriate, even offensive this is?  Don’t bother answering.  The answer is pretty self-evident.  They have neither humility or shame.  They have only hucksterism at the core of their being.

Now, let’s examine how the Palestinians will see Trump’s speech there.  The PA rump Pres. Mahmoud Abbas just left Washington, where Trump lied to his face and told him he plans to be “a mediator or an arbitrator or a facilitator.”  You simply can’t be even-handed when you ennoble Jewish mass-suicide at this place.  Can you imagine Ayatollah Khamenei or Hassan Nasrallah or even Vladimir Putin speaking to Palestine from Deir Yassin or any other location of immense Palestinian national suffering?  What message would that send to Israelis?  If one understands why such a gesture would be horribly provocative, why can’t one understand the stupidity of Trump’s choice?

Amidst all the controversy of the Israel trip, let’s not forget the second leg of this presidential journey: Saudi Arabia.  Undoubtedly, Trump plans to say, by including the Islamic nation in his itinerary, that he sees it as a key to solving the Israel-Palestine conflict.  It will also reaffirm Israel’s budding bromance with Sunni states in the region presided over by strongmen and generals.  It will be a signal to Iran that Trump is siding with the new Sunni-Israel axis, further isolating (or attempting to isolate) Shiite Iran.

It’s a terrible plan for a multitude of reasons.  The U.S., when it throws in its lot with rapacious, thuggish forces inevitably loses in the long run. Not only do we betray our ostensible values of freedom and democracy, but we inevitably choose the losing side (in the long run).  As I’ve written here before, the future of the Middle East lies in countries like Iran, and to a lesser extent Lebanon and Turkey, which have opened themselves, to at least a limited extent, to the technology and commerce of the west.  These are countries that are again, not unilaterally and perhaps haltingly, turning toward the west while refusing to renounce their own religious traditions and culture.  The Sunni states have largely eschewed such an approach.  They remain mired in kleptocracies with authoritarian rulers doling out welfare for cronies.  They look inward and see the outside world as a threat.

By siding with these sclerotic regimes, we show ourselves to be aiding and abetting the repression they represent.  It will only cause our own international reputation to be deeply tarnished and weakened.  Who will benefit?  Our own rivals in Moscow and Beijing.  They don’t pretend to have any political or philosophical values to export to the world.  They only have money, influence and power to peddle (along with advanced weapons systems).  Speaking in the language of modern consumerism, if you have a Brand that is trusted, cheapening your image by straying from the product’s core value can mean death in the marketplace.

Finally, the symbolism of Donald Trump’s first overseas trip as president including only Israel and Saudi Arabia is ass-backwards.  Think of all the intractable problems the U.S. faces in the world.  Think of all the rivals who are causing us anguish.  Yes, we did have visits from China’s and England’s leader to the White House.  And yes, a Trump visit to Moscow would be impossible considering how compromised he is by his Russian Connection.  But what about allies?  Germany, France, England, South Korea, Japan.  Are they less important than Israel and Saudi Arabia?  This trip is a sign that this president’s priorities are entirely lop-sided.  There is no strategy behind his foreign visits.  As such, they will not further our interests.  They will continue the scatter-shot approach that characterizes Trump’s governance style.

For Hebrew speakers, I recommend Idan Landau’s hilarious Trump impression in this post in which he’s ghostwritten the president’s Masada speech.

Well – Masada is a dramatic photographic backdrop (and Trump is obsessed with visuals) – should make for impressive visuals. And considering the remoteness – the crowd can be controlled and vetted.

Not sure no one ever made a political speech there – but it is just so remote and in the middle of the desert… Not the best place to draw a crowd.

should make for impressive visuals

Oh boy, just wait till you see those 1,000 FOD (Friends of Donald) dressed as Roman centurions as they storm the fortress, only to be repelled by Sayetet Matkal commandos dangling-down from Apache attack helicopters (a la Mavi Marmara). It will be memorable!

Make Masada Great Again! Centurions could be a great visual, though one needs to avoid angering Italian-Americans. I think he should use Arabian Camel Auxiliaries as aggressors, and somehow work in US assistance in repelling the Roman forces.

Trump use short and well-understood words. Stressing in particular the simpler words (even when more complex ones can’t be avoided) and placing an emphasis on repetitions of words and phrases numerous times in a speech. Speeches even a 6 year old (or an Appalachian hillbilly) can understand.