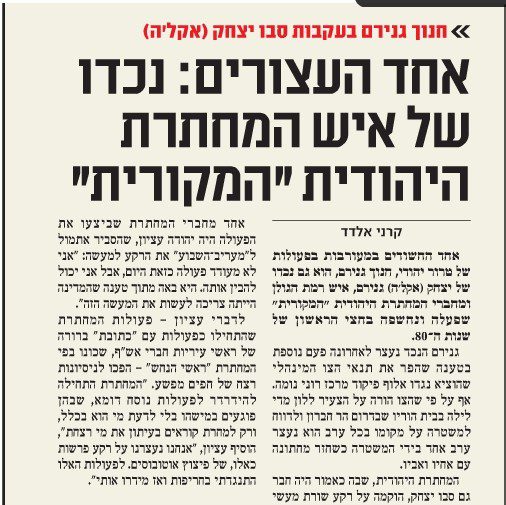 As a result of its interrogation of two suspects in the case of the murder of the Dawabsheh family, another two suspects have been arrested.  The first two suspects I named yesterday, Elisha Odess and Hanoch Ganiram, were under gag order.  They are no longer.  Today’s new suspects are Amiram Benoliel and Israel K. (no last name known at present).  Their names are currently under gag by order of Shabak.  They are all accused of the arson attack against the Palestinian home resulting in the death of a young couple and their little baby.  The crime left another young son an orphan.

Though it was a horrid crime and Netanyahu performed his usual song-and-dance claiming this was horrendous, wouldn’t be tolerated, the killers would be caught, etc.  No such thing happened.  Israel heard from Bogie Yaalon why the murderers likely would never be brought to justice.  And that was fine with most Israelis: out of sight out of mind.  But they didn’t reckon with the Supreme Court, which once in a while stirs from its slumber and does the right thing (more below).

An Israeli private attorney filed a petition asking the court to lift the gag order.  I doubt it will happen until the Shabak believes it has elicited as much information as it can get from the detainees.  To paraphrase the old song lyrics: “What Shabak wants, Shabak gets.”

Today, Israeli national police commander, Bentzi Sau, smugly told all Israel that his force was about the break this case wide open.  This is a case of taking a sow’s ear and turning it into a silk purse.  As I wrote yesterday, two separate sets of Israeli Palestinian MKs demanded that the Supreme Court hold the defense minister and attorney general responsible for failing to do their job in this matter.  In a hearing today, the Court gave both of them another week to produce results.  Though the Court bestows far too much deference on the security apparatus, even it could no longer stomach the charade foisted on the Israeli public by continuing inaction.

This isn’t a case of a cracker-jack police or counter-terror force performing admirably and efficiently, as Sau would have us believe.  It’s a case of a security apparatus trained to look the other way at Jewish terror, being dragged sullenly toward its duty.  It has no choice.  If it wishes to maintain the charade that the case can’t be solved at the risk of exposing secrets, then it threatens on being dragged through the mud by a Court rapidly losing patience.

Sau also added that the police had established a stellar record of “preventing Jewish terror.”  The only example of such terror that he mentioned explicitly was price tag attacks.  Which is ironic because there have been scores of such attacks, almost all never solved.  Sau didn’t claim success through arresting, trying, convicting and imprisoning suspects. But rather through the atrocious, lazy tool of administrative detention.  He had the chutzpah to claim that in the past three years the level of damage inflicted by Jewish settler terrorists on “Palestinian property” has gone down 72%.  Frankly, I have no idea what this means, where this statistic comes from or how it was compiled.  But it’s a load of horse manure as far as I’m concerned.  The level of violence against Palestinians rises by the day, whether or not you include the 97 Palestinians killed by Israelis over the two months (almost half of whom, even by Israeli accounts, were not accused of attacking anyone).

Another Palestinian MK, Basel Ghattas, alluded to my role in reporting the case:

“Is it true, as reported by foreign media, that the Shabak refused to file an indictment only in order to protect intelligence sources, or rather because it sought to cover its ass and avoid a new scandal?”

“Israel heard from Bogie Yaalon why the murderers likely would never be brought to justice.”
Can you support this claim with a source? All I read is he said at the time they weren’t ready to charge suspects.

You know very well what was published about Ya’alon word. 972mag interpretation as ‘low priority’ is silly.

If that all you have to show for your above statement, then it is false.

@ Arik: You don’t change the goalposts in the middle of the game. You asked where Yaalon had said the case would likely never be tried and I offered it to you. Now you say Yaalon is a liar and therefore his word should not be believed. That is a non sequitur & also changes the original terms of our debate, which you can’t do.

Eva, I wish there were many more lovers of the democratic and liberal judaism
as Richard. If we could clone Richard a million times, Israel would be a much better country than it is today. Unfortunately, Israel is infested today with Jewish groups who are the closest that
one could ever imagine to Neo Nazi thinking about the Palestinians, to racism (racism
is the worst with HABAD, the most despicable Jewish sect in Israel), and Israel is now
the only country in the whole world that keeps a people (4.7 millions !!) under its full control with no civil rights and hardly any human rights. Americans like you , Eva, are not helping Israel with their unconditional
and uncritical love, which is a pill of death to the state of Israel. You would do yourself and us , Zionists,
much more favor had you criticized the government of Israel, promoted the rejection of the apartheid created by the presence of Jewish settlers over the green line of 1967, and had you rejected the type of poisonous support offered to Israel by AIPAC

@Amiram: You too are a brave, fearless peace activist. Thanks so much for your high regard, which I cherish.

Amiram, you are so right. Especially referring to the “pill of death” support accorded to Israel.

I don’t believe that Israel’s national police, is a ‘security apparatus trained to look the other way at Jewish terror’.
A police informant had infiltrated the Jewish terror group. If this informant double-crossed his handlers, than that’s ineptitude on the part of the police, not nonfeasance.