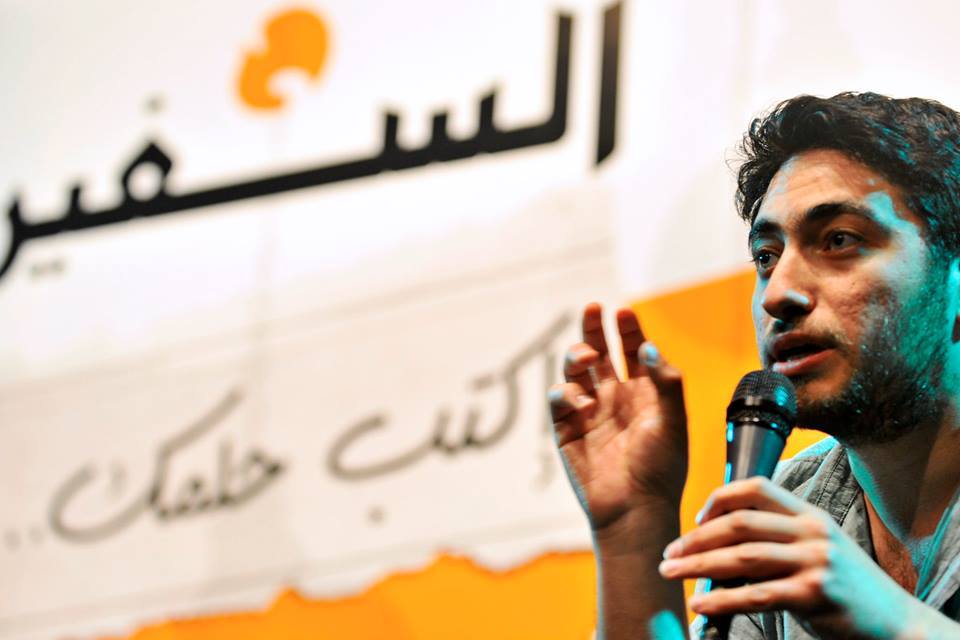 I received an urgent message from Jamil Dakwar of the ACLU that Palestinian journalist and political activist, Majd Kayyal, age 22, was arrested on his return to Israel from a trip to Lebanon and Jordan.  I’ve checked with an Israeli source who tells me he was arrested as a national security suspect.  The combination of his trip to Lebanon, where he attended an event celebrating the 40th anniversary of As-Safir (considered a pro-Hezbollah publication), his participation in a 2011 flotilla voyage to break the Gaza siege, and his activist role in Adalah (where he was the website editor) and Balad (Hebrew), made him a ready target.

Kayyal also edits the political and cultural website, Qadita and the English-language blog, Message to the Tricontinental.

At midnight Saturday Israel-time, a few hours after his arrest, the security police raided his Haifa home and confiscated his computer and other electronic devices and materials.  Jamil reports he has been denied access to an attorney, which is standard procedure for Israeli Palestinian security suspects.  A judge will be asked to extend his remand tomorrow and will automatically do so, again as is standard for the Only Democracy in the Middle East.  Majd can also expect abuse and even torture from his security service interrogators just as Ameer Makhoul did.

For those with good memories, who’ve been reading this blog for several years, you’ll recall his case.  He was also a Palestinian community activist from Haifa who founded the Ittijah NGO.  He too returned from a trip to Jordan, where he allegedly met a fellow activist Hassan Jaja at an environment conference.  The Shabak made Jaja out to be a key Hezbollah operative, when in reality he owned a landscaping business in Amman.  My guess is that Shabak discovered a similar meeting Kayyal had with a suspect individual who the security forces can turn into an Islamist bogeyman.

This persecution is part of the ongoing effort by Israeli secret police to criminalize Israeli Palestinian nationalism.  As I’ve reported here, Yuval Diskin, then Shabak chief, said in 2007 that any such political expression would be viewed as sedition and criminally prosecuted by the State.  That is what is happening in this case.  Nothing more.

Here is a Mondoweiss interview published with Kayyal before he joined the 2011 Gaza flotilla.  Read the words of this ‘mortal danger’ to the Jewish State:

Are you concerned you will be treated worse because you are Palestinian?

I hope not, but usually Palestinian activists face more problems from Israeli armed forces. However, as a Palestinian citizen of Israel, it’s extremely important to show the unity of the Palestinian people to the international community and remind the political leadership that they cannot abandon our rights and must include the status of ’48 Palestinians in any just solution.

How do you see the Palestinian struggle right now?

I think that the Arab spring is the most inspiring and is providing us with a renewed motivation. I see that we need to rebuild the popular struggle on the ground. We need to revitalize the participation of the youth and the students in forging a more powerful movement, as we can see their importance in the uprisings of Egypt, Tunisia and others. Now is the time to move beyond partisan problems and focus on the main target, which is the colonial and racist regime Israel has imposed on the Palestinian people.

This arrest, which constitutes a severe assault on press freedom, since Kayyal is an Israeli Palestinian journalist, is under gag order in Israel.  It has not been reported in Israeli media.  I hope this publication will poke a hole in the shroud of opacity that favors such assaults by the security apparatus.  An international group of activists joined together to fight on Ameer’s behalf.  I’ve begun a process which I hope will lead to the same support for Majd.

Thousands expected to take part in Day of Rage events against policy of resettling Bedouin of southern Negev desert.

“We, the Palestinians in Israel, are taking responsibility of our rights, our future and our self-determination… not by the Israeli institutions but in the streets, not as Israeli citizens but as a united people beside [Palestinians in the] West Bank and Gaza,” Majd Kayyal, a Palestian activist from Haifa who organised protests on Saturday, told Al Jazeera. “The confiscation of 50 percent of the lands that we own inside Israel is a war declaration,” he said

Protection of the Bedouin under UN charter as an indigenous people?

Please keep track of this case so that we know if he was convicted or released.
As far as i know, visiting Lebanon without permission is a criminal act per se.

As far as i know, visiting Lebanon without permission is a criminal act per se.

Not exactly, a number of Israeli Jewish journalists including Lisa Goldman have done it without facing any charges. Technically it is illegal (but apparently only for Israeli Palestinians!).

Majd Kayyal has written glory in the twenty-fifth of last month on a page in the site “Facebook” after his arrival in Beirut: “Dear friends, last night fulfilled a dream and went to Beirut.’m Going with colleagues and friends from Lebanon, Iraq, Tunisia, Morocco, Sudan, Egypt, Yemen, in a seminar Ambassador of the Arab” We are in 2054, “a symposium to mark the 40 years of the establishment of Al-Safir newspaper, and after the events and programs related to the duration of two weeks …”.