Israel’s ambassador to Norway has been recalled by the foreign ministry (see Yediot article displayed below).  Local Norwegian staff at the embassy and the ambassador’s household staff each accused him of exposing himself and other acts of harassment, an allegation he denies. Israeli media cannot report the name or country in which this diplomat served. But I can.

He is Naim Araidi (Hebrew) an Israeli Druze poet and lecturer in literature at several Israeli colleges.  Though he had no previous diplomatic or political experience, Foreign Minister Avigdor Lieberman chose him because, as a Druze he came from Israel’s Arab minority, yet endorsed the nationalist views of the Israeli Jewish mainstream.  Israeli Druze pride themselves on being distinct from the Palestinian minority and even from the majority Muslim culture among Israeli Muslims.  Many (though not all–there is a growing refusal to serve among young Druze) serve in the IDF, since a 1956 agreement between the State and communal leaders appointed by the State made service compulsory.  Since such service often provides important social and professional networking opportunities, they may use it as an entre into majority Jewish society. 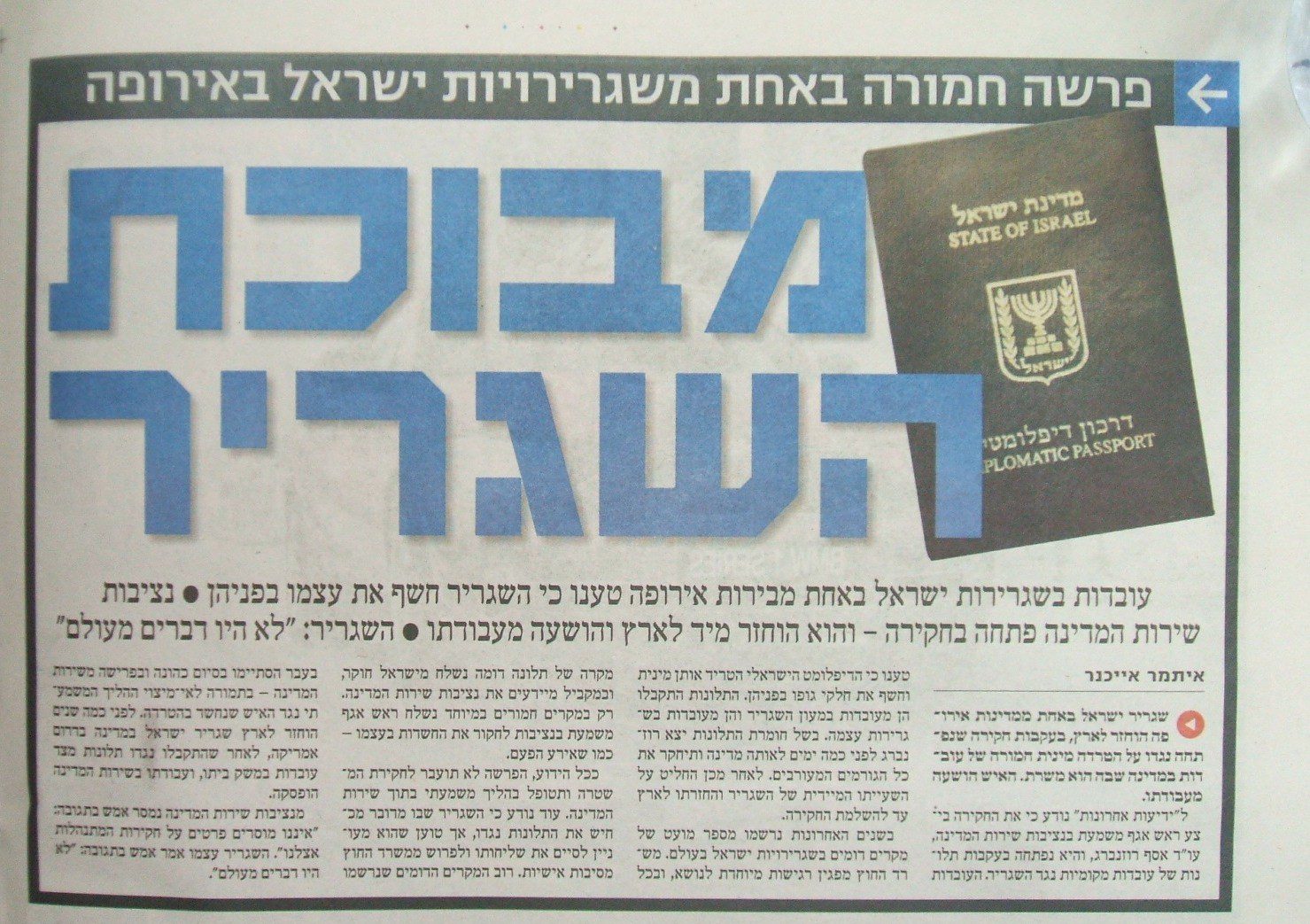 Lieberman spoke publicly at the time of Araidi’s appointment about the reasons for it, noting he was sent to Norway because of its strong BDS “delegitimization” movement.  The foreign minister felt that an Israeli minority would make an especially strong case against this tendency, since Norwegians have generally been quite supportive of the anti-apartheid movement in South Africa and other movements for ethnic justice.  As such, an Israeli Druze could provide an especially effective rebuttal (Hebrew) to the pro-Palestinian movement popular in Europeans capitals.

For his part, Araidi, while not endorsing Lieberman’s anti-Arab politics, had this to say (Hebrew) about them:

As for me, I have no problem with Lieberman.  He and the Israeli right are more transparent and honest than others and therefore less problematic for me.  It surely would be a good idea for him to begin to express himself more politely, but from a basic perspective he is no different than anyone else [any other more moderate Israeli politician].  What’s the difference between Lieberman as foreign minister and the others that preceded him?

For his doctoral dissertation, Araidi didn’t choose a Druze or Palestinian poet.  Instead, he chose Uri Tzvi Greenberg, the poet of the Revisionist movement, and one of Jabotinsky’s favorites.  He noted that one of the qualities of Greenberg’s poetry he especially admired was the Nietzschean belief that poetry and art were beyond  good and evil.  One wonders whether he incorporated such a belief into his private life as well.

The Israeli civil service undertook an inquiry into the allegations against the ambassador and sent a staff lawyer to investigate.  Once he interviewed the alleged victims, he decided to send Araidi home for the duration of the inquiry.  The diplomat told Yediot that he planned to end his ambassadorship and “retire” from the foreign ministry.  I’m virtually certain his resignation will be accepted.

Such an appointment only proves that when the nationalist right exploits Israeli minorities, especially those with no professional qualifications, for political purposes, it will backfire not only on the one who makes the appointment, but on the entire State.

UPDATE: Within a year of writing this post, Naim Araidi died of cancer after his return to Israel.

“Israeli Druze pride themselves in being distinct from the Palestinian minority and even from the majority Muslim culture among Israels Muslim. They serve willingly in the IDF and use such service as an entry into majority Jewish society”
This reflects the Israeli hasbara point of view. Reality is much more complex. I don’t know where to start….. so I’ll post some links about the Druze community in Israel:
– Growing number of Druze refuse to serve in Israel’s army
– “Israel tried to brainwash us’ says Druze pioneer who refused army service.
These articles are in this list on the Omar Sa’ad-case, the young Druze musician from the Galilee who’s become a symbol of Druze resistance to conscription. Omar Sa’ad sent an open letter to Bibi last spring telling that he refused to serve in the Israeli army and that he grew up identifying as a Palestinian. Saad was imprisoned in December
electronicintifada.net/tags/omar-saad/
A few facts: compulsory military service was imposed upon the Druze community in 1956 through an ‘agreement’ between the State and some Druze religious leaders in opposition to the general Druze opinion (cf. one of the articles).
According to a Haifa University study (2010), two-third of the young Druze would not serve in the military if it wasn’t compulsory.
At any given time there are three or four Druze refusers in prison (and they are punished harsher than the Jewish citizens)
972mag also has numerous articles on the Druze (embedded in the articles about Omar Sa’ad) and an interview with Omar Sa’ad
972mag.com/tag/omar-saad/
One of the most famous Palestinian poets is Samih al-Qâsim (living in Haifa): he’s a Druze and has been to prison several times for refusing army service.
In August, Omar Sa’ad and his two brothers, Mustafa and Ghandi, participated in a concert at the Royal Albert Hall as part of the Palestinian Strings with Nigel Kennedy. Here 15 years-old Mustafa playing Vivaldi wearing the keffiyeh
http://www.youtube.com/watch?v=jDXBnS8mZ0E

I understand that there are emerging ideas in the Druze community that compete with the previous consensus. I welcome that. But I was trying to explain what I believed was the majority view was of these matters. Not endorsing it.

I know you’re not endorsing it, Richard 🙂
In fact, it seems that the Druze oppostion to conscription has always been important, but that the Druze community – as a minority within the Arab minoirty – has always been very quiet about this, the religious leaders asking the young refuzniks to go to jail but keep silent. As elsewhere in the Middle East the Druze have a long history of ‘staying neutral’ or ‘adapting’.
And with the hasbara presenting the Druze as a pro-Zionist community exemplified by high-profile members as Ayoub Kara, it’s easy to fall into the propaganda trap.
In some of the articles that I mentioned there are interviews with Omar Sa’ad’s father and a former Druze member of the Knesset for Balad, Said Nafa, who both give some historical background.

Sir, has the recall of an unnamed diplomat been confirmed by the foreign ministry? I am a Norwegian journalist and i would like to follow up on this, but I cannot find any references to the matter on English versions of Israeli news outlets.

No, Yigal Palmor was contacted by a Norwegian journalist who had no comment. But the story has been widely reported by now in Norway, in your paper as well I believe. Thanks for your interest.

It is substantial to clarify that Araidi does represent the Druze community in the foreign ministry, nor his views represent the majority. Most Druze oppose the right wing nationalistic position expressed by Araidi and his patron, Liberman. Araidi is reminds me of Milton’s Faust, who sold his soul to the devil, in exchange for “pleasure”. This is an opportunistic personal position that has nothing to do with supporting a nationalistic policies of the foreign minister and his government.
I suggest that you meet Druze intellectuals to learn more about the real positions in the community.

@ Prof. Jamal: Thanks for correcting my misimpressions. I didn’t mean to say that Araidi represented all Druze or their political beliefs. I’m sorry if I conveyed that impression. I would love to do that someday if I can get to Israel.

I can’t speak for the numbers or about this specific situation, but I do know that there are people of all ethnicities, religions & political inclinations (et cetera) who abuse their power. Some of them have no lack of training or experience in their professions.
I am glad this news is being picked up….

I wonder why you did pick this issue to write about. Not that it is not an important subject, it is, but I can not escape the feeling that you could not have made the point you wanted to make without misrepresenting us, the Druze minority. You could have done it differently with all due respect, but it seems that you where eager somewhat and rushed it.