You didn’t think you were gonna get away without seeing Bibi Netanyahu’s Wile E. Coyote moment during his UN speech today, did you?  Look at the picture, Bibi’s even glaring a bit like the coyote after he’s been outsmarted by the Roadrunner.  Someone (Bibi himself?) in the day and age of Powerpoint presentations, thought of the great idea of sending their boss up to the lectern of the world’s most respected international body with a sharpie and a cartoon version of a nuclear bomb.  I suppose they thought the simplicity of the gesture might impress.  Instead it’s backfired as any simpleton could’ve told them it would.

Further, Bibi made a critical error in drawing his “red line” at the 90% enrichment level.  He meant to draw it BELOW that line since presumably Israel would want to attack Iran BEFORE it achieved weapons grade uranium fuel.  If Israel attacked Iran AFTER it secured enough fuel to make a bomb it would defeat the purpose, no?

What I think we should be talking about is “If Israel wants to attack Iran because it is an existential threat, then why would not they just show us how capable and independent they are and go ahead and do it? Why are they going around making all this noise while a simple smart thing to do is to surprise Iran with an attack? Or is it just an attack but it has to be done FOR them instead of BY them?

Haha, Twitter is going wild with Bibi the Clown.
Here are some good alternatives: 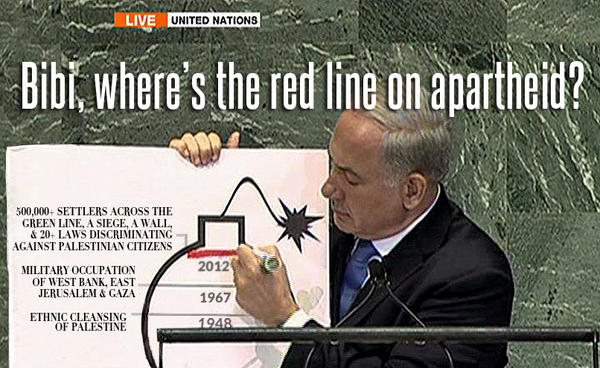 Good catch, Richard. Hilarious… as is most of what the Yahoo says…

Bibi is too scared to attack Iran without US support, and Obama isn’t about to cooperate so close to the election (and I strongly suspect not at all). So I stopped worrying about it and became amused. Netanyahu has become ridiculous. I don’t think I’m alone in seeing this.

He grossly miscalculated, thinking he would finally get US backing to do what he’d been wanting to do for years. All that whining, almost 20 years of twaddle about how Iran was just a breath or two away from possessing a nuclear weapon. We know what it’s all about, anyway. The world is not endangered by Iran possessing a nuke, and in fact may be a bit safer if that were to happen since there would be a country capable of holding Israel in check. Israel knows this and doesn’t want to give up its title of Neighborhood Bully.

Looks to me, in fact, like things are going to hell in a handbasket for Bibi.

This is the bookend to Colin Powell at the UN a decade ago.

Striking images (from 2007) of the biggest Jew hater in the world….. meeting with Jews.

The 90% line on his bomb does not refer to 90%-enriched uranium. It is supposed to show Iran nine-tenths the way along the road to a bomb.

That’s Neturei Karta. They have met with one another on several occasions, with great amity. I’d encourage you to learn more about that group.

Ah, so our only disagreement is where we are on the field…at the 20 yard line or 10 or whether we’re making a goal line stand, to use Bibi’s earlier sports lingo.

“Poll shows 65 percent of Jews supporting Obama. Israel comes in at a distant 4th among issues that respondents list as “most important” to them in US presidential election, AJC finds.”

First — what image is Lifelong referring to?

Second — 90% before or after… it doesn’t matter because this is show business. It would have been neat if he had held his diagram upside down or dropped it, something to break with the ugly cant. Ah, can’t have everything. I should be grateful for the little we do get.

Bob: “It is supposed to show Iran nine-tenths the way along the road to a bomb.”

Which is, of course, exactly what Bibi said about Iran waaaaaaaay back in 1992.

Apparently the Iranians have been stuck at that 9/10th point for, ohhhh, 20 years now.

Maybe they have no intention of budging from it?

After all, that’s exactly what the NIE’s have been saying……

Clearly Yom Kipur was a waste of a day for you Richard, you will get another chance next year.

There’s no halacha that says Jews who endanger the existence of the State of Israel deserve a pass from my pen. As for you, you’ll get another chance here too if you post again. But just barely.

And there is this one too:

Richard, I am loath to correct you, but it isn’t Wile E. Coyote. The picture clearly shows that Netanyahu is Elmer Fudd, otherwise retired from Looney Tunes.

Richard, to re-state a point i have seen periodically made around the net over the last couple of months (and probably even here), the far right in politics is unyielding everywhere regardless of nationality. Their lack of sway leads to a fragile international order. Compromise is not the same thing as capitulation, but listening to ultra-conservatives would lead one to believe otherwise. “Capitulation” is weakness, “compromise” is strength through reason.

A large consensus of analysts agree Iran is highly unlikely to agree to a complete cessation of its enrichment program. Israel will do what it wants, but the continued insistence on Israel’s part that Iran give up its civilian nuclear program altogether is a sure-fire recipe for eventual conflict. Somewhere between 20% and 5% a compromise needs to be found if there is hope to head off this conflict.

The NPT is the proper framework to address this issue. Israel is the one seeking exception from international norms on the nuclear issue.

That picture he’s holding looks mighty familiar. I seem to recall seeing this in the ACME Catalog. The ACME Company. Yes. The people that brought you Rocket Powered Rollerskates and Giant Roadrunner-Crushing Mousetraps are proud to present another fine product that goes BOOM! What a tool. lol

You are right – there is a lot of game-playing here. The big hope of course is to get the results without having to attack and these threats induce alternative pressure modes as the economic sanctions (which keep expanding). Given the already restless population there (the “Iranian Spring” is still in an explosion-waiting-to-happen state) they might actually work despite all the skepticism. It all begins to look like a Hollywood movie in which the “saving the world” act happens in the very last minute and until then everybody is kept in suspense.

When Bibi hits the after-dinner lecture circuit, he’s not going to command the same fee scale as Anthony Charles Lynton Blair, is he?

Yes Yes — it was those innovative geniuses at ACME. First, the internet, then this chart.

Would you like to tell us how the day be better spent so that it is not wasted? I am not Jewish but would like to learn, please. Also, given the fact that Bibi is talking all that much about Iran nukes, while he is sitting on a complete arsenal of them and even refusing to join the NPT, do you think that Bibi has not wasted HIS Yom Kipor?

“Bibi is talking about Iran nukes, while he is sitting on a complete arsenal of them”
Haha, Carlos Latuff draw that picture perfectly:
http://twitpic.com/ayww17

My grandmother used to say: “When you don’t have anything smart to say, just shut up”. Got it Richard?

Some honesty from Bibi would be appreciated: “We want Iran taken out so that we will have a freer hand to further dispossess the Palestinians.” But I’m sure that most of the world has this figured out.

Richard, what did you think of Ahmadinejad’s speech?

See Mana Neyestani’s cartoon for my impression. I watched a portion of his Charlie Rose interview which I thought rather pathetic, but generally less harmful to world order than Netanyahu’s.

Your grandmother knew you pretty well didn’t she? But you didn’t honor her wisdom. So I will now by shutting you up here. Or at least I’ll restrain you by moderating you.

Richard,
I’m interested to know at the end, do you think that Iran possessing a nuclear weapon is something you can live with ? Netanyahu is probably the worst prime minister we had and he made many mistakes with Iran and elsewhere. However, the danger of Iran having a bomb seems to be something to be addressed. Even those who think it would stop Israel “BEING A BULLY” should be concerned about what could happen next : A scenario of a nuclear bomb to al kaida comes to mind.
You can argue a lot about whether Israel is a threat to the region, but you certainly can’t see it as a threat to Europe or to the USA.