DONATE: This post breaking a major story involving Israeli corruption at the highest level of its intelligence apparatus is what Tikun Olam does best. You won’t find the information I broke here anywhere else, even in Israeli media. So please stand against military censors, gag orders and  national security secrets.  If you understand why I perform a critical role in defending press freedom and democratic values in Israel, donate now to my fiscal sponsor, Independent Artists and Media, via Paypal.

Israel and the US followed a parallel path in the era of Trump-Netanyahu, leading to a disintegration of values and a cheapening of public discourse.  Corruption ruled in both countries thanks to the sociopathic, narcissistic proclivities of both leaders.  The subordinates they appointed, even to the highest, most sensitive positions in the land, reflected their own personality defects.  An example of this is Yossi Cohen, who served as Mossad chief for the past five years.

Throughout Israeli history, the heads of Israeli intelligence (the Mossad and Shin Bet) have been men of the shadows.  Tough men who spoke little.  Their actions spoke for themselves.  They were devoted to their mission to protect the nation.  That came before all else, including themselves personally.  I am not arguing that they were all good men or that they acted in moral ways.  Far from it.  But they almost to a man, observed a strict code of conduct and humility in the public sphere. 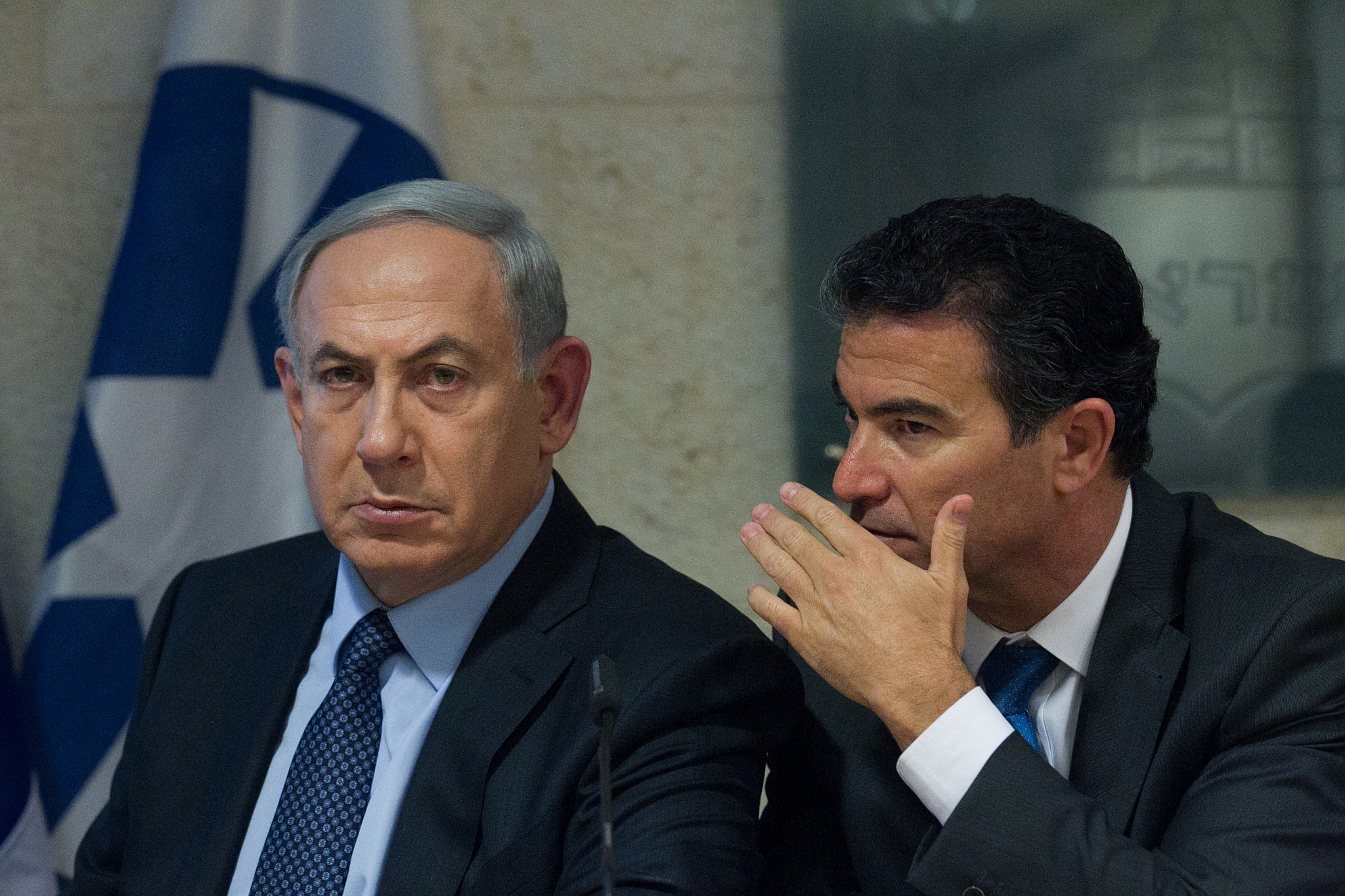 Then came Yossi Cohen.  From the earliest stages of his career, he stood out as a figure of grand gestures.  He bedded women serially while being married.  They included female staff of Mossad.  His nickname was, Doogman, “The Model.”  His antics were commemorated in Victor Ostrovsky’s tell-all book about the agency.  There, Ostrovsky exposes with relish some of “Yosy’s” (Cohen) sexual escapades.

As Mossad chief, he has achieved his share of success, but often to the nation’s detriment and his own benefit.  After almost every smashing agency success, an anonymous source leaked to Israeli media that the Mossad took credit for it whether it was an Iranian assassination, spiriting an Iranian archive out of the country under the noses of the country’s intelligence apparatus.  Numerous times former Israeli security officials would take him to task for jeopardizing secrets that could complicate Israel’s relations with other countries and bring the state closer to confrontation, if not war.

Cohen also shared with Netanyahu expensive tastes and a fondness for hob-nobbing with the world’s powerful oligarchs.  That’s how James Packer gave Cohen $20,000 as a gift on his daughter’s wedding.  Packer also “gifted” Cohen front row seats to his then fiance, Mariah Carey’s Tel Aviv concert.  He also hosted Cohen for an overnight stay in his hotel suite.  Packer was attempting to secure a permanent visa at the time. Though the civil service commission investigated this blatantly corrupt act, it refused to pursue the matter.

In another instance, two wealthy Israeli businessmen, shipping magnate Rami Ungar and Michael Levy conducted a decade-long dispute regarding ownership of the Kia automotive concession for Israel.  Ungar attempted to turn one of the key witnesses against him and bring him over to his own side.  The key figure pressuring the witness to do so was Yossi Cohen.  The final judgment was in favor of Ungar, who later donated $300,000 for the building of a synagogue next door to Cohen’s home.

Cohen also interceded with the Trump administration in a partially successful attempt to persuade it to remove sanctions imposed on rapacious Israeli billionaire mining magnate, Dan Gertler (those sanctions were reimposed by the Biden Administration).  Cohen also traveled twice to the Democratic Republic of Congo, where Gertler’s diamond concessions were located and secretly met with ex-president, Joseph Kabila.  When the current president discovered this, he declared Cohen persona non grata.

Another tycoon with whom Cohen shares a close relationship is Hollywood producer, Arnon Milchan.  You may recall that earlier in his career he was a Mossad asset who played a key role in stealing essential enriched uranium from a US facility and shipping it to Israel.  Raviv Drucker reported that when Cohen sought the job of national security advisor, because it would draw him closer to PM Netanyahu, Cohen asked Milchan to put in a good word. He did so. In a page torn from the Trump playbook,  Milchan told Cohen that Sara Netanyahu insisted that appointees be loyal.  Cohen assured him that he would be.  (Anyone remember the infamous dinner with James Comey in which Trump asked the FBI director whether he could be counted on to be “loyal,” and his guest, unlike Cohen, coyly refused?).  Cohen got the job, which served as a stepping-stone to the real prize: being named Mossad chief.

In his post-Mossad life, Cohen has done well for himself. SoftBank named him as a key advisor helping identify the investment of $200-million in the Israeli high-tech sector.  Among the companies funded by SoftBank was AnyVision, the company which provides facial recognition technology for Israeli military and intelligence units monitoring Palestinians in the West Bank.  It’s also worth noting that SoftBank has teamed with Saudi and UAE sovereign wealth funds in massive investments in the region.  Cohen, who played a key role in normalizing Israeli relations with these Arab states, can serve a similar role in maintaining such relationships for the Japanese investment giant. 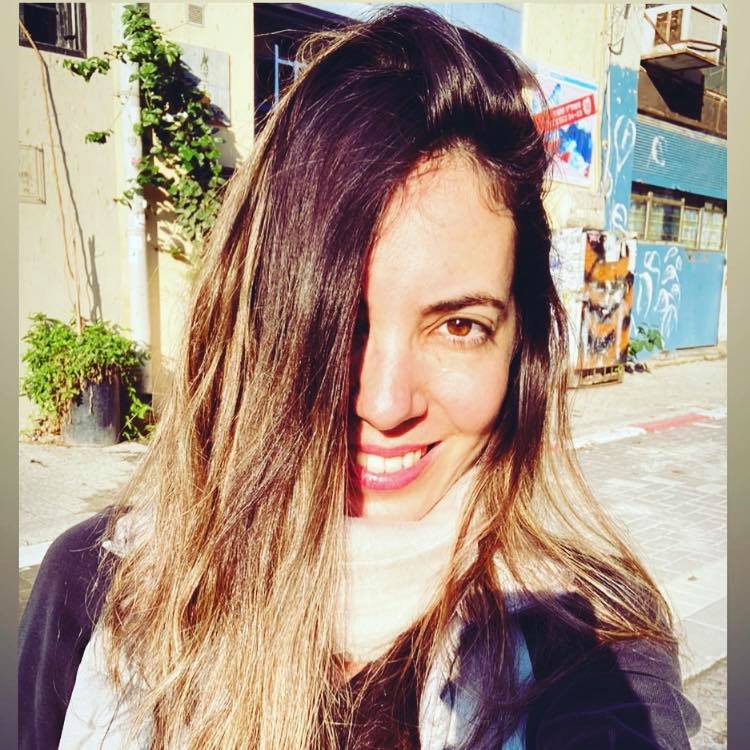 ‘The Model’ and the Stewardess

Given Cohen’s reputation as having an “eye for the ladies,” it’s not surprising that on one of his plane flights around the world he met an Israeli flight attendant and commenced an affair.  They were both married.  But that has never stopped him before.  He even had a friendly relationship with the flight attendant’s husband, until the latter began to grow suspicious.  As a result, Cohen intervened with his sister-in-law, the CEO of one of Israel’s largest investment companies, to fire the cuckolded husband who was, at the time, one of her most productive investment rainmakers. 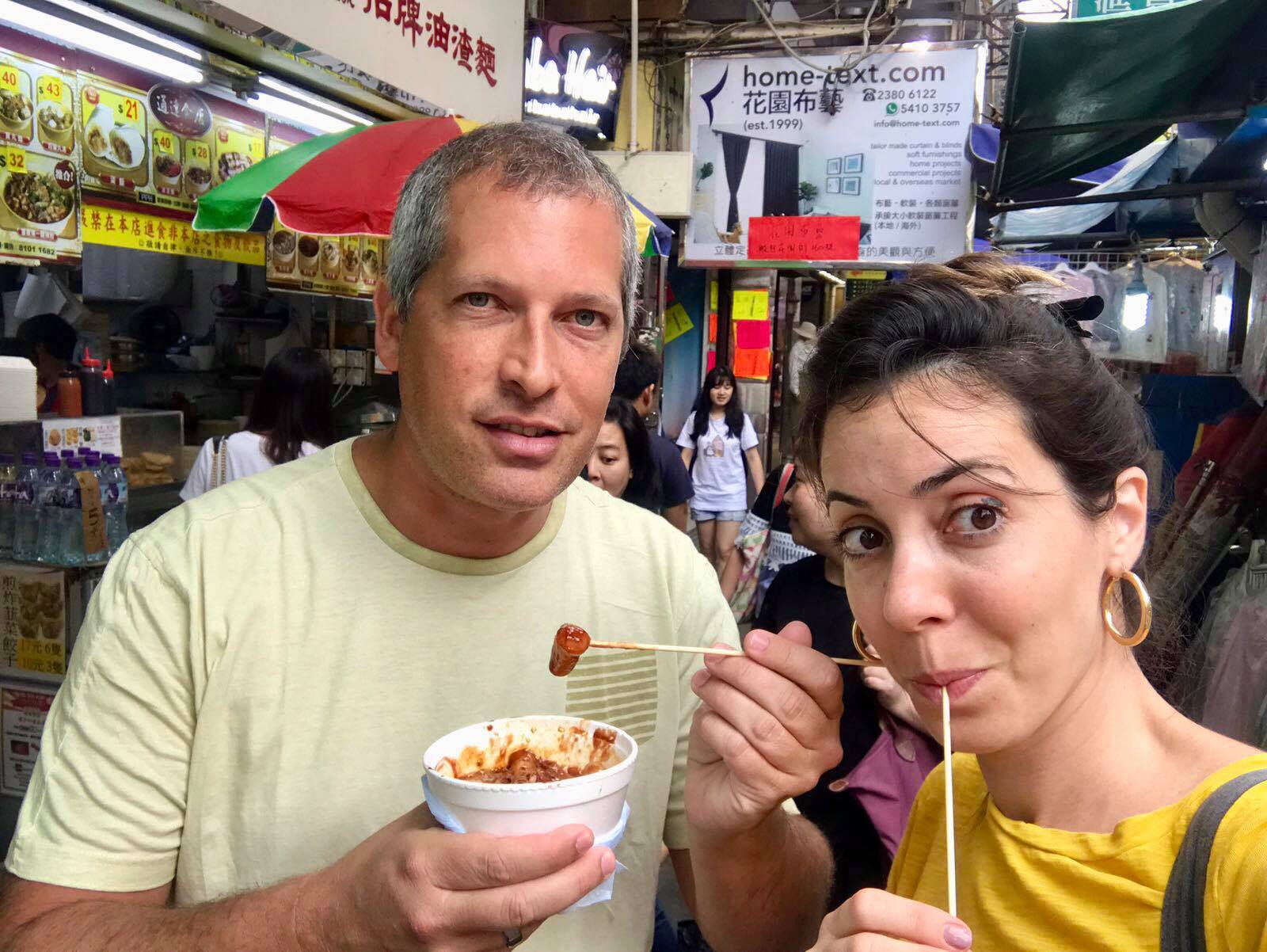 The husband, who’s recently been identified as Guy Shiker, hired lawyers and threatened to sue.  As a result, and in order to keep him quiet, he was handed a handsome severance package.  But word spread and yesterday, Israel’s Channel 13 aired a story on the scandal full of sordid details, some of which I profiled here.

Israeli media has not reported the name of Shiker’s wife, though almost anyone in Israel who wants to know does.  She is Maya Harel Shiker.  Reportedly, she has sought and obtained a judicial gag order prohibiting the press from reporting her identity, as I just have.  Her Facebook page contains pictures of her with her soon-to-be ex-husband (he’s seeking a divorce).  It also features pictures of her in her El-Al uniform with her co-workers. 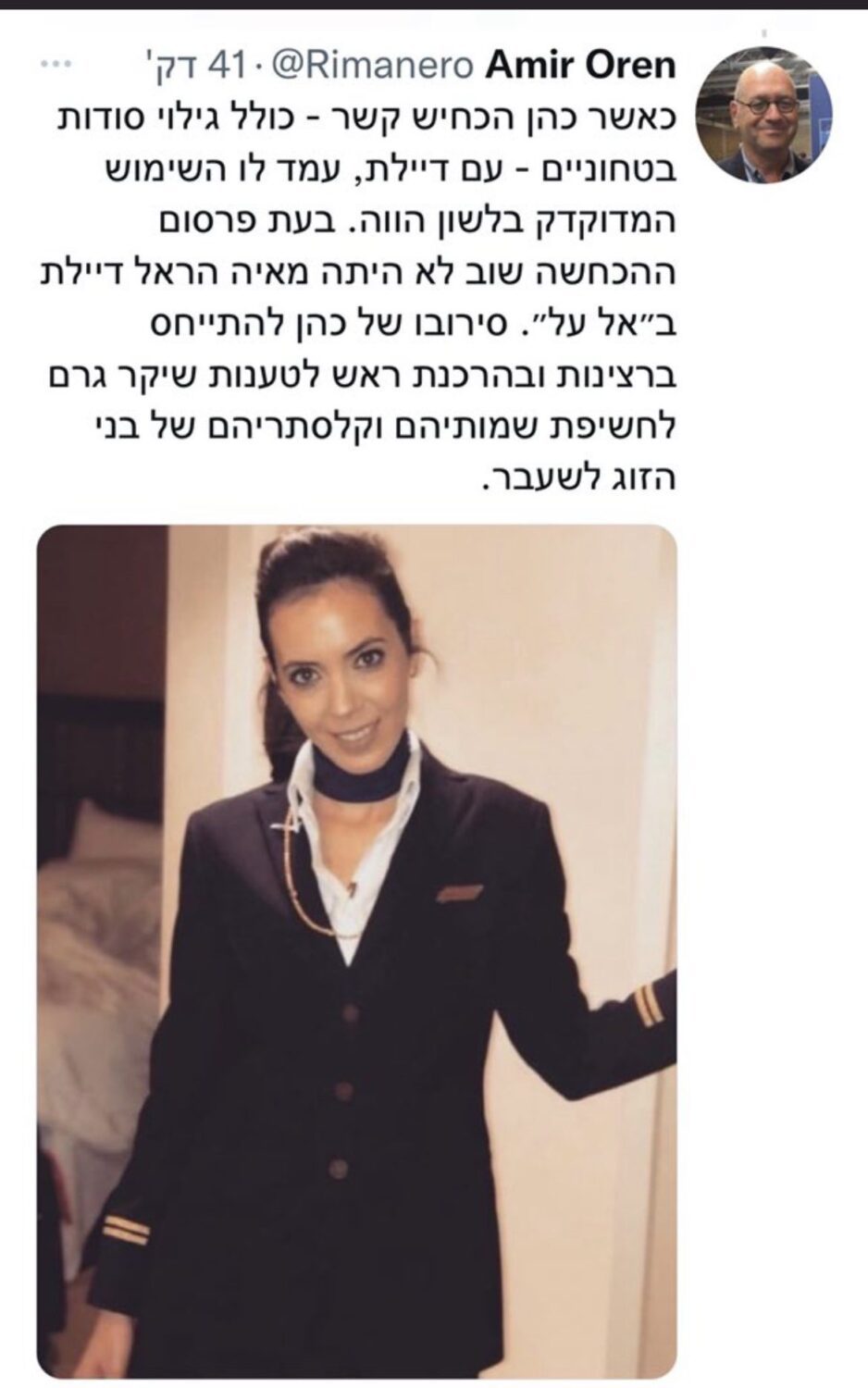 Amir Oren, one of Israel’s finest journalists, reported her name six months ago, as I note in this image of one of his social media posts.

Another powerful Israeli leader had an affair with a flight attendant while married.  In fact, Bibi Netanyahu divorced his first wife after meeting vivacious flight attendant, Sara Ben Artzi and conducting their own torrid affair.  The rest is history.

Guy Shiker’s most explosive allegations assert that Cohen shared with the couple Mossad secrets concerning Israeli relations with Arab states.  Some of the information was quite detailed and would have been damaging had it gotten into the wrong hands:

Cohen reportedly disclosed that he had used a cover in which he represented himself as an Arab tour guide…According to…Shiker, Cohen told him and his wife how he was recruited into the Mossad and how the organization tracked an Arab leader’s doctor, as well as anecdotes containing other classified information. In addition, Cohen allegedly disclosed that when he took office as Mossad director, he fired and replaced six division heads because they were not loyal to him…

Shiker was also aware of Cohen’s travel around the world, including a 30-hour trip from Chad to New York around the time of an official visit by then-Prime Minister Benjamin Netanyahu to the African country.

Another instance in which Shiker reportedly followed Cohen’s movements was reported to senior Mossad officials, including the agency’s acting director. “Hamakor” reported that when he met with Shiker, Cohen told him that this had embarrassed him before the agency’s top brass.

… Cohen was also asked by Shiker to hire Shiker’s personal secretary, a 23-year-old woman, and to station her in Bangkok, the broadcast alleged. The young woman was then hired by the agency and stationed in Bangkok, “Hamakor” reported.

Such shenanigans could simply not happen at any spy agency in any western country.  These governmental units and their leaders are accountable to both the country’s executive and legislative bodies.  A figure like Cohen would never have gotten away with what he has.  But Israel is a country mired in corruption.  The very powerful figures with whom Cohen socializes themselves run their lives based on such self-interest and corrupt dealings. Cohen is only aping what he’s learned from them.  Not to mention the figure of his prime patron, Bibi Netanyahu, whose appetite for luxury and corrupt dealings is even greater than Cohen’s.  Neither one has so far faced judgment.

One of the reasons all this matters so much is that Cohen is endlessly ambitious.  He wants to be prime minister.  He will use any tool or weapon in his grasp to obtain this goal.  If he is not stopped by these scandals and criminal investigation, he very well could become Israel’s top leader within the next few years.  A 19th-century French diplomat once said that countries get the leaders they deserve.  In Israel’s case, that seems particularly apt.

In contrast to what you claim Nethanyu is facing judgment. As to Yossi Cohen it still remains to be seen.

@Jay: No Netanyahu is not facing “judgment.” He is facing trial in cases which have gone on for years. Will he truly be judged ever? Perhaps. But certainly not in the foreseeable future.

@ Eli Gal: I’m always amused when an Israeli comes here all cocksure about themselves and makes a mockery of themselves. Maya Shiker’s name was not given in the broadcast. Did you not know that? Didn’t you watch the broadcast before commenting? It was in my post, hence it is breaking news.

Richard, relax please. Why the aggressive attitude? True that Maya’s name was not given in the broadcast, but all was divulged on Edna Karnaval’s blog – including all photos that appear on your post. If she had plagiarized this from you, please accept my apologies; if not, then yours is not “breaking”.
Here is a real “breaking” for you: seems like this had been her second marriage. Thus a Cohen-divorcee affair. That is definitely a breaking. Sacrilege!

@,Eli: I have More “breaking news” for you. There is no “Edna Caraval.” She is Lorry Shem Tov using a pseudonym for some reason. But you didn’t know that, did you? She is an unbalanced person who is not to be trusted, no matter what she reports. Believe her at your peril.

Anyone who questions my Journalistic integrity as you have will get the same treatment.