Today’s images and words from the White House are among the most disturbing I’ve ever seen since the riots following Martin Luther King’s assassination in 1968.  Under orders from the president, mounted police attacked 1,000 peaceful protesters at Lafayette Park outside the White House.  They fired tear gas and rubber bullets at ordinary citizens offering no resistance.  They caused this mayhem at the whim of a president cowering in his underground bunker for two days. 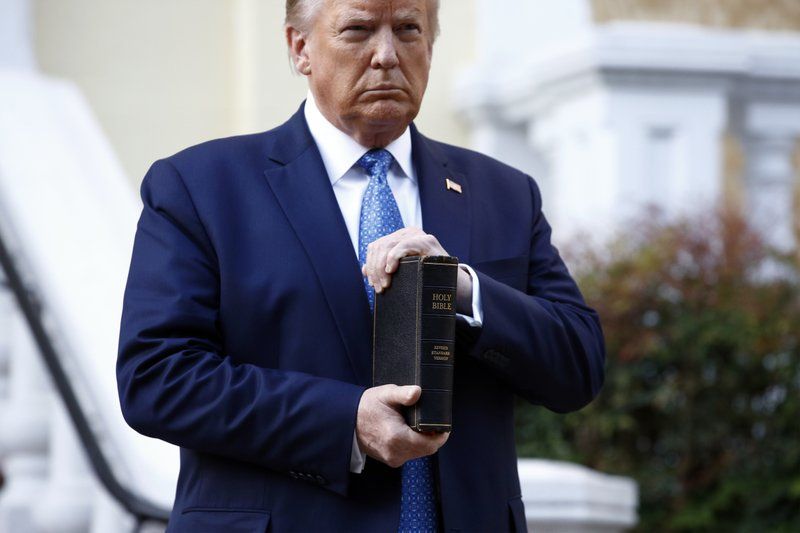 Trump wields the Bible as shield to ward off Satanic anarchists

In a show of force, Trump determined he would offer a statement in the Rose Garden and then cross the street to St. John’s Episcopal Church.  The Church had not been notified of his intent.  He appeared for his photo op with his Mafia brain trust including McEnany, Barr, Meadows outside a boarded-up church.  It was the weirdest photo op I’ve ever seen.  Trump also wielded a Bible as if it were a talismanic shield to ward off the evil spirits of anarchism.  The Episcopal bishop was scandlized and denounced his shameful ploy to exploit religion for partisan purposes.

But Trump’s Rose Garden statement was even more disturbing:

Declaring that “I am your president of law and order,” Trump warned that “our nation has been gripped by professional anarchists.” He ordered mayors and governors to “dominate” the street, warning that “if a city or state refuses to take the actions necessary to defend the life and property of their residents, then I will deploy the United States military and quickly solve the problem for them.” Those who crossed Trump on this “will be detained and prosecuted to the fullest extent of the law.”

Harkening back to the days of the real “law and order” president, Richard Nixon, who rode his tough-guy credentials into the White House amidst the anti-Vietnam protests in 1968, Trump believes he can manufacture the same sentiment in America.  But he can’t, because there is a significant difference between today and then. In 1968, we were fighting a war over which there was tremendous division in the country.  And some in the anti-war movement did engage in violence, planting bombs and killing people.

Most Americans understand that there is a fundamental problem with police violence.  They understand there is racism in this country.  They may disagree on how to address the problem. But virtually no one except a white supremacist would claim George Floyd’s murder was justified.

Further, there is absolutely no evidence that Antifa or “professional anarchists” have “gripped” the protests.  There is more evidence of infiltration by neo-Nazis than there is of provocations by anarchists or other left-wing “agitators.”  This again is an old saw drawn out of an old black bag of tricks used by authoritarian rulers through the ages.  There may be some who will be fooled by this ridiculous rhetoric.  But for most this will come across as hollow and even shameful.

As for Trump’s call on local leaders to “dominate” the protesters, this amounts to the State declaring war on its own citizens.  I implore mayors and governors around the country, whether Blue or Red, conservative or liberal, to reject these words.  Do not start a civil war in this country.  Do not provoke mayhem.  The road that Trump is traveling is the Road to national Perdition.  Turn back before it’s too late.

Finally, even if Trump activates the Insurrection Act to call out the U.S. military, all citizens and leaders in America must resist.  Even military officers should resist. Do not attack your own fellow citizens.  America must not become a police state.

We are entering a very, very dangerous phase.  There is a tripwire and Trump has just tried to activate a time bomb.  Please God, let cooler heads among Republicans and Democrats prevail.  Will the GOP leadership finally call him to task before it’s too late?

Fully support your thoughts in this excellent article thank you

I’ve been writing about America’s White Supremacist Leader since 11-’16 … like you I’m no fan of HRC nor JB. Hope for America was taken away by three political assassinations in my lifetime.