NOTE: If you have added details about this story please be in touch.

Israel’s arms trade is well-known for flagrant corruption. The deals and bribes happen both on the receiving end (client and related brokers) and on the Israeli end. The most egregious example of this is the German submarine scandal, in which an Israeli arms dealer and his lawyer negotiated a 20% fee for themselves on a deal for 8 German Dolphin submarines and other navy ships worth $5-billion. These two individuals are so closely related to Bibi Netanyahu that there’s a strong conviction among many Israelis that the payoff included Bibi himself in some way, shape or form. This is the issue currently under investigation by Israel’s major crimes squad.

An Israeli scandal sheet, Inyan Merkazi, reported (see screenshot) yesterday that there is a scandal brewing that involves sales of drones and other advanced weaponry to a “foreign country.” Those implicated in the corrupt transaction are a politician, an arms dealer and a businessman. The case is under gag order.

Yesterday, The Marker reported that the Israeli drone manufacturer, Aeronautics Group, was under investigation by the Israeli major crimes unit 433 for corrupt dealings with a “significant client.” Since the publication included a reference to a previous case brought against the company involving dealings it with Azerbaijan, it’s clear that the paper was implicitly saying that this new matter also involves Azerbaijan.

It also referred to s specific question raised by a major shareholder during a company conference call. The investor asked whether the new charges refer to Azerbaijan. That seals the deal as far as which client state the case involves.

The question is–why didn’t this violate the gag order? Perhaps because, unlike Inyan Merkazi, the story doesn’t specify the charges being investigated. Perhaps because the police realize that half of the Tel Aviv stock exchange either participated in that call or later heard the audio recording of it.

Azerbaijan is well-known as one of the most corrupt states in the world. It has huge oil resources which have proven a bonanza for the Azeri élite. Since the country is fighting a long war with Armenia, it’s also proven an arms bonanza for a major weapons exporter like Israel.

Aeronautics is one of Israel’s leading drone manufacturers. Recently, it went public, raising $250-million on the Tel Aviv exchange. Its CEO is Gen. (ret.) Eitan Ben Eliyahu, former chief of the IAF.

After the police investigation was reported, the stock took a nosedive, losing 20% of its value. Early investors have in total lost about 40% of their original investment.

Aeronautics recently faced a major scandal when its executives directed a drone operator to mount an attack on an Armenian military position. The operator refused. Before quitting his job, the operator filed a complaint with the defense ministry that the company violated its export license by actually intervening directly in the Armenian-Azeri conflict over Nagorno-Karabakh.

If correct, the censored Inyan Merkazi story indicates there must be a previously unreported aspect to this case. I’m guessing that the drone sales by Aeronautics involved bribery or kickbacks either on the Israeli or Azeri side of the transaction.

7th Eye, Israel’s major publication reporting on Israeli media, also noted the gag order in a story deliberately offering almost no specific information about the case, so as not to run afoul of those enforcing the judicial gag order.

But one important feature of the post is a statement by Yossi Melman that this particular case has no relevance to Israeli national security. It is simply a case of commercial corruption. The police here are attempting to exploit the tactics of the military censor, whose goal is to suppress media coverage that would directly damage Israeli security. In this particular case however, there is no such damage and the tactic is being abused with the willing participation of the Israeli judiciary which permits this overreach.

This supports my thesis above that the gag order attempts to suppress a new element of this case. A case involving corruption would fit Melman’s account. However, if Melman was referring only to the earlier case of the whistleblower–that would involve Israeli national security, since news of the story, which I reported here while it was under gag, might jeopardize Israeli relations with Armenia. In short, that’s why I believe this new, but related case, involved senior company executives and others caught with their hands in the till.

That Aeronautics Orbiter drone looks like a Klingon warship from the original Star Trek. 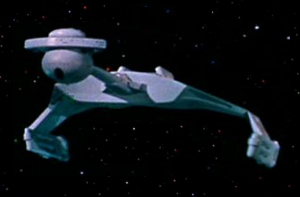 Otherwise this is yet another story of crooks helping crooks.