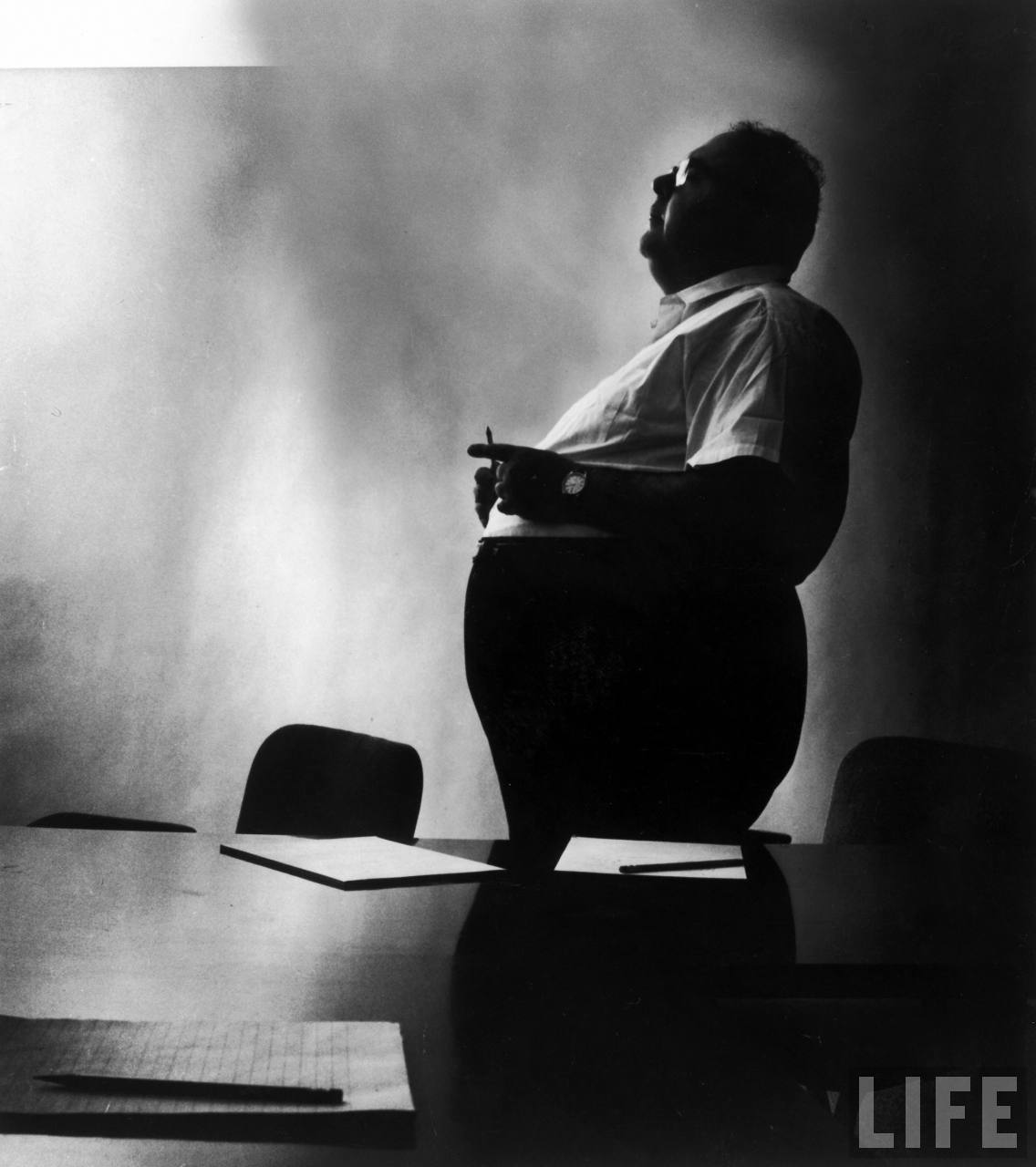 Herman Kahn as featured in a Life Magazine profile

When Bibi Netanyahu comes to New York next month for the UN General Assembly, the Hudson Institute will bestow its Herman Kahn award on him. Kahn was an early neocon intellectual who advocated U.S. first-use of nuclear weapons. He propounded this theory in his provocatively titled 1960s book, Thinking the Unthinkable.

The Institute is a leading neocon think-tank based in Washington DC. It is a wonky version of the American Enterprise Institute or the Heritage Foundation.  It’s senior vice-president is Scooter Libby, a man who barely escaped spending time in a federal prison.

The Hudson Institute is the primary funder (see Didi Remez’s post for a fuller discussion of the funding and relationships) of the far-right Israeli NGO, Institute for Zionist Strategies, which advocate purging “post-Zionist” material from Israeli academic curriculum.  They’ve been so successful at pressuring academia to “Zionize” the curriculum that Tel Aviv University President Joseph Klafter promised he would personally examine individual course syllabi for tainted content.

Hudson is also the primary backer of Uzi Arad’s Atlantic Forum, a shadowy Israeli think tank founded by the former Mossad officer. The NGO’s mission is to strengthen Israel’s security relationship with NATO.  He’s reputed to have “run” Larry Franklin, the former Defense Department analyst caught with Steven Rosen passing U.S. secrets to the Israelis.  Rosen too came within a whisker or two or landing in federal prison.  Luckily for him, the Israel Lobby came to his defense and the Justice Department dropped the case against him.  Arad worked with Kahn at Hudson in the 1970s.

Bush-era neocon analyst, Meyrav Wurmser, runs Hudson’s Center for Middle East Policy.  That explains Hudson’s love affair with Netanyahu and the award he is to receive.  In many ways it seems fitting for the Israeli leader to receive an award named for Kahn.  Israel is, after all, one of the most dangerous of the nuclear states.  One of those most likely to engage in first-use of nuclear weapons would the circumstances arise.  One may argue whether that distinction should rather belong to North Korea or Pakistan.  But the Koreans don’t yet have the capacity to destroy western Asia as Israel does the Middle East.  And Pakistan’s nuclear arsenal is child’s play compared to Israel’s estimated 200 nuclear warheads.

It may be worth hearing some words said about Kahn’s work. A reader summarized another of his books: “On Thermonuclear War, was ‘a moral tract on mass murder: how to plan it, how to commit it, how to get away with it, how to justify it.'”  Some other words of wisdom from Kahn on nuclear deterrence:

“If it is not acceptable to risk the lives of the three billion inhabitants of the earth in order to protect ourselves from surprise attack, then how many people would we be willing to risk?”

Another critic said that the publication of that book “should properly have caused the sequestration of its author into psychiatric care.”  A science reporter, reviewing Kahn’s book called him a contemporary version of the the devil:

“Not the traditional devil, reeking of brimstone and tempting men to old-fashioned sins, but a slick, talcum-scented, contemporary Satan, rationalising hideous emotions by reference to strategic studies, electronic computers, contingency planning, and all the other gimmicks of paranoiac gamesmanship.”

The following comment by Kahn to a reporter surely served as the inspiration for Terry Southern’s screenplay for Dr. Strangelove: “I can be funny on the subject of thermonuclear war.”  In fact, writing in the NY Times, Fred Kaplan says:

…The real model [for the Strangelove character] was almost certainly Herman Kahn, an eccentric, voluble nuclear strategist at the RAND Corporation, a prominent Air Force think tank. In 1960, Mr. Kahn published a 652-page tome called “On Thermonuclear War,” which sold 30,000 copies in hardcover.

…When Dr. Strangelove talks of sheltering people in mineshafts, President Muffley asks him, “Wouldn’t this nucleus of survivors be so grief-stricken and anguished that they’d, well, envy the dead?” Strangelove exclaims that, to the contrary, many would feel “a spirit of bold curiosity for the adventure ahead.”

Mr. Kahn’s book contains a long chapter on mineshafts. Its title: “Will the Survivors Envy the Dead?” One sentence reads: “We can imagine a renewed vigor among the population with a zealous, almost religious dedication to reconstruction.”

So it is altogether fitting that Bibi Netanyahu be enshrined along with Herman Kahn in a sort of Nuclear War Hall of Fame, as two men prepared to see their region (in Bibi’s case) or world (in Kahn’s) go up in flames in order to “save” their country.

It’s perfectly fitting that a past recipient of the award was Dick Cheney (especially considering his former protege, Scooter Libby works for Hudson).

In today’s terms “Accepting the Unacceptable” as voiced recently by UK’s new PM Theresa May and use for the British nuclear subs. The US leftist blogs found her remarks as quite “acceptable.”

From the Vietnam era renownded RAND Corporation, Robert McNamara which led to the Pentagon Papers; the RAND Corp adds fuel to the NATO and Atlantic Council warmongering versus Russia in a reset for a Cold War 2.0 with potential use of nuclear arms.

After the Arabs attacked Israel in 1973, and with her back to the wall, Israel’s Golda Meir resisted the nuclear option, while Israel’s sons were dying by the thousands in the Sinai.

‘Dr. Strangelove, was an American character, and your efforts to graft that character to Israel and Bibi is inaccurate and perverse.

@Trippin’ John: Give it a break. Dr. Strangelove is an American film mercilessly satirizing America’s policy of MAD (mutually assured destruction). It opposes U.S. nuclear policy & use of these weapons. It does so by criticizing a character modeled on Herman Kahn, whose name adorns the award Butcher Bibi is to receive. The analogy is totally fitting. If you don’t like it tell Bibi to sign NPT & agree to make ME a nuclear free zone.

” If you don’t like it tell Bibi to sign NPT & agree to make ME a nuclear free zone. ”

Butcher Bibi? That’s real clever.
The only thing that gets butchered around here, is Truth.

Hi Richard, terrific article, very informative. Hilarious too! those clowns at hasbara are always up to ridiculous antics.

On another topic: would you kindly provide me with some links and/or videos to the information that all or most of all love the internet traffic runs through Israel first before it runs via underwater cables at the bottom of the ocean to the rest of the world.