NOTE: I have been on an enforced “hiatus” from this blog for the past two days due to the entirely unpleasant task of being deposed in a lawsuit brought against me by an detractor of this blog (more on this hopefully at a later date).  I’m glad to say I’m back.  So much to write about, so little time.

Israeli media have been filled with counter-spin stories about the good work being done by its intelligence agencies, which have come in for a beating recently, for mankind.  It’s a subtle hasbara counter-offensive designed to counteract the horrible PR from the Dubai assassination fiasco.  First, we had the “Green Prince” Mosab Yousef, son of Hamas’ co-founder who was “turned” by the Shin Bet, became an Israeli agent, betrayed his fellow Palestinians, converted to evangelical Christianity, moved to (where else?) California, and published a tell-all book.  I presume he joined that other fake reformed Palestinian militant for hire, Walid Shoebat, who resides somewhere in the Golden State.  And like him, with a big book to sell, Yousef seeks to cash in on his notoriety through western media celebrity, renunciation of Islam, and embrace of Christianity.  No doubt, we’ll see him at John Hagee CUFI events and they’ll parade him before Christian Zionist megachurches.  He’ll be on Christiane Amanpour Sunday, earn some hefty fees, maybe get a 60 Minutes segment.  Despite or because of  all this, Yousef’s story strikes me as more pathetic than substantial.  The clear propaganda value for the Mossad though is noted in this Independent report:

Even if its details might be exaggerated, the report enables the Israeli intelligence community to claim a success at a time when the Mossad foreign espionage agency is being criticised for alleged identity theft in using forged UK, Irish and other passports and for being caught on film in advance of the assassination. 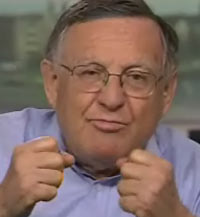 But Haaretz published a second story that is far more troubling and pernicious.  A distinguished Israeli-Danish journalist with supposedly impeccable progressive credentials, Nahum Pundak, outed himself as a former Mossad agent.  The story, written by Yossi Melman, who himself is known as a sometime conduit for stories the Mossad wishes exposed in the Israeli media, presents Pundik as a man who, in becoming a Mossad agent, sought to do good, only good.  Mmm, can we think of any reason why the Mossad might want to put forward the image of the liberal journalist with a conscience joining forces with the Mossad to bring enlightenment to the Third World?

Herbert Pundik (Nahum Pundak), a veteran Israeli-Danish journalist with an international reputation…a week ago in an interview with the Danish daily Dagbladet Information said that for about 10 years, he worked for the Mossad while doing his journalism job…

“Yes, I was a Mossad Agent,” said the headline of the…interview with Pundik by journalist Lasse Ellegaard. The newspaper is identified with the left, and its origins lie in the Danish resistance to the Nazis. And this is how the reporter introduces him:

“We know a great deal about Herbert Pundik. He volunteered to serve in the Israel Defense Forces. In the past he passionately defended Israel and today he criticizes the country to the same degree. He constitutes a model for emulation for journalists writing about the Middle East. He has tremendous knowledge and admirable analytic ability. He is considered a moral authority because of his critical sense. But only a few know that Pundik once worked for the Mossad when he was employed by the Information and the [Danish newspaper] Politiken.”

Pundik admitted to his interviewer…that during his travels and his assignments in the 1960s in Africa, he provided information to the Mossad (and also reported to Davar, the now defunct daily of the Histadrut labor federation…). But he added that “this connection was severed in 1970, when I was appointed editor-in-chief of Politiken.”

“I traveled all over Africa under the cover of [being] a journalist,” said Pundik. “In general, where is the boundary between espionage and journalism? For example, I wrote a detailed analysis of the tribes in Somalia and their attitude toward political parties, I investigated the political situation in northern Nigeria. These were things that the newspaper was also interested in.”

Is that intelligence work? the interviewer pressured him. “Yes, in large part it was intelligence work, and I did it on one condition, which I was glad was fulfilled, that my reports be transferred to Denmark as well. The late Peter Isloe, who was no. 2 in the Danish military intelligence, received copies of my reports from the Israelis.”

This is the good Mossad, the cultured Mossad, the Mossad working to create bonds of brotherhood between Israel and Africa.  Ah those bygone days of yesteryear when Israel saw itself as the beacon of hope and understanding to such nations!

There is much that is troubling and self-deluding about Pundik.  Somehow he absolves himself of the charge of dual loyalty with the claim that he was an honorable spy in compelling the Mossad to share his reporting with the Danish military.  And he absolves himself of the charge of betraying his journalistic reputation by noting that both the Mossad and his newspaper were interested in subjects he wrote about in Africa.  Not a word about the fact that he might’ve written articles for the Danish audience that portrayed Israel and its diplomatic work in Africa in a highly flattering light.  Not a word about how this would’ve compromised his journalistic ethics.

Pundik said…”the Mossad has a basic principle: They don’t enlist Jews to spy against their own countries. The Mossad has a principle of not compromising Jews in relation to their countries of origin.”

Not to mention that Melman himself, a journalist at times sympathetic to the Mossad, even notes that the agency compromised the rights and identities of its own citizens in the Dubai assassination.  So either we have here a naive ex-spy who spooked in an era so long ago that its quaint values no longer exist; or we have a fellow who’s doing an excellent job of lying to himself and on behalf of his ex-paymasters.  Take your pick.

Pundik’s case should provoke discussion in the journalistic community here, too. It’s no secret the Mossad has used the services of foreign correspondents.  For example, when Israel wanted to bring the remaining Yemenite Jews to Israel in the 1990s, journalists who were allowed to visit Yemen were asked to make contact with the Jewish community there. However, with a few exceptions in the 1960s, the Mossad has refrained almost on principle from using Israeli journalists.

In the 1960s, Mossad chief Isser Harel used a few journalists, including Yeshayahu Ben Porat and the late Uri Dan, for the purpose of finding the addresses of German scientists who had helped Egypt’s missile program. When the addresses were obtained, the Mossad waged a scare campaign on their families and sometimes even sent explosive packages and tried to assassinate the scientists. However, such use of Israeli journalists angered then prime minister David Ben-Gurion…and was discontinued.

Unfortunately, Melman conveniently doesn’t name names of currently practicing journalists as Mossad conduits.  But I’d include Ben Caspit of Maariv on the list.  My Israeli readers will certainly know more names that should be outed as at least compromised by bias if not worse.

Melman neglects to include in his discussion foreign correspondents who would be a real prize for Mossad recruitment, perhaps even more desirable than an Israeli journalist.  This is at least in part why stories like the one about Ethan Bronner and his conflict of interest through his son serving in the IDF are so important.  With stories like Pundik, we realize there are different levels of compromise of one’s journalistic principles.  There are those who are fully or partially bought like Pundik and the others named above.  Then there are others who, while perhaps not being bought, are nonetheless compromised in other ways.

The damage that Pundik does is in putting the integrity of all journalists into question.  If someone of such apparent impeccable political and journalistic credentials as this man can join the spooks couldn’t anyone do so?  And then, who does anyone trust when it comes to reporting on the Israeli-Arab conflict?  This is precisely the reason why I treat even reports in more reliable media sources like Haaretz with a certain level of dubiousness unless I know the journalist is trustworthy.

That wasn’t the case in the 1950’s. when Operation Susanah recruited several Egyptian Jews to plant bombs in Egypt to undermine US and British confidence there.

Mosab Yousef is already doing the cable news circuit. He’ll be on Amanpour (CNN) this Sunday. Let the propaganda begin.

Regarding the Danish journalist who was a Mossad agent, I wonder how many “journalists” in Iran are agents?

The mainstream media have lost all credibility with me. I wonder about the NYTimes and the Washington Post and whether there are any “agents” on their staff. I wonder if anyone who’s appeared on Charlie Rose on the subject of Iran and the Mid-East conflict is an agent for Israel. I know some behave like spokespersons, but despite their blatant bias are they agents planting seeds of mis-information too?

No wonder the majority of Americans support Israel’s policies unconditionally with this massive amount of brainwashing taking place.

I feel like the fight to counter this morass of fiction and propaganda is so overwhelming and discouraging; it makes me want to abandon the battle.

I wonder about the lawsuit brought against you, and regardless of the reason, I beg you, please keep up this good fight and don’t abandon the truth.

I wonder about the lawsuit brought against you, and regardless of the reason, I beg you, please keep up this good fight and don’t abandon the truth.

More on that in due time, I promise. I can keep up the fight with the support of readers like you & the many others here. And don’t forget to introduce others to the site as well. The larger the readership, the more impact we can have & better defend ourselves against this type of onslaught.

I will definitely spread the word. I may not comment often but this has become a site I visit regularly knowing I can count on your straightforward clarity.

Sorry to hear about your legal troubles — good luck!