Lev Leviev has a problem.  His problem isn’t that he’s a diamond mogul.  That’s his opportunity, from which he’s made a few cool billions.  His problem is that he’s a West Bank settlement builder who uses stolen Palestinian land on which to build housing for Jewish settlers.  In the process, he fulfills a right-wing nationalist vision of retaining all of Greater Israel AND makes millions.

How to deal with this problem?  He’s tried to typical Hollywood PR solution: give a big party, invite all your friends and donate a few thousand bucks to some innocuous charity.  Put out a big press release about it, when the celebrity interviewers come calling be sure to brag about how charitable you are.  Yada, yada.


Only problem is it’s backfired for Lev.  After telling a journalist for a posh high society magazine that he gave oodles to UNICEF, the group disowned him.  Now, not having learned his lesson the first time, he’s done the same thing, bragging that he was a major donor to Oxfam. 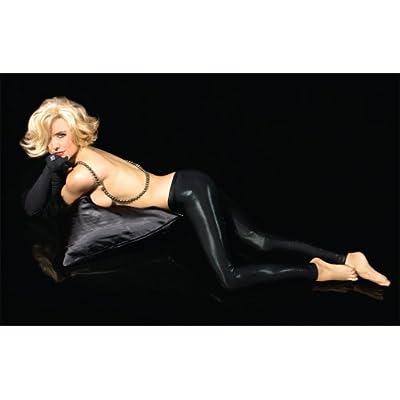 Lev’s life is being made a bit of a living hell by Adalah-NY, a pro-Palestinian human rights group which shadows his every move for just such slip-ups on his part.  When Adalah learned about his Oxfam claim, they discovered that a celebrity photographer had persuaded several comely actresses including Susan Sarandon, Kate Hudson and Mary Jane Olson to bare almost all, many (eighteen of twenty-three featured celebrities) of them covered in the most strategic places by Leviev’s sumptuous diamonds.  The pictures were to be published as a book, Hollywood Pinups, whose proceeds would benefit Oxfam.  I guess diamonds are some girls’ best friend even when they’re mined under dubious circumstances in Angola; and even when the mogul who drapes them over your body is a right-wing, Chabad-following, land-stealing fatcat with absolutely no conscience. I should add that there’s no indication that any of the models knew of Leviev’s human rights abuses before they agreed to wear his jewelry, though they do now.

Oxfam was so troubled that it’s clarified that while it endorses the book and gladly accepted the contribution from White (for this reason I’ve featured the book here), it refuses to allow Leviev to claim in any forum that he is a supporter of Oxfam:

Although it’s true that Oxfam and Leviev Diamonds are both mentioned in this book, Oxfam reiterates our policy that we are not and never will be partners or beneficiaries of Leviev because of both his mining practices and his support of Israeli settlements on Occupied Palestinian Lands which is in contravention of International Law and a major obstacle in the road to peace.

So which charity will be Lev’s next target?  I’d urge any charity to be on the lookout for Lev’s representatives seeking to exploit its good name on behalf of their dirty client.

I have nothing against beautiful women baring their bodies for a good cause.  But couldn’t they do it without getting into bed with Lev Leviev, thus promoting his filthy business dealings?  These diamonds aren’t quite blood diamonds, but they’re pretty damn close.

In a related matter, Susan Sarandon appears in the book as well, though draped in a strategically placed boa, rather than Leviev diamonds.  This is pertinent because Adalah has unsuccessfully appealed to her to sever her ties with Leviev and end her attendance at Leviev store promotional events.  I don’t have any problem with her participation in the book since she doesn’t promote his jewels in it.  But given the fact that she’s just appeared at the Middle East International Film Festival to promote a documentary she narrated, The Shape of Water, about the plight of women in the Third World (including Jerusalem); and given that the film features the ground-breaking work of the anti-Occupation Women in Black; and given the fact that she is a celebrity spokesperson for UNICEF (which rejected a donation from Leviev),  methinks her refusal to understand the role of Leviev’s settlement building activities in depriving the Palestinian people of justice, indicates that she has a huge moral blind spot on this particular issue.

Yes, Sarandon shows the typical moral inconsistency of many liberals.

As is often the case, I agree with Ellen. That reminds me; I need to make a donation to Oxfam!

Goodness gracious, can the proverbial Hollywood Liberal get any more vapid?