Today is Rosh Hashana, the Jewish New Year. Tomorrow as well. The liturgy for the second day of Rosh Hashanah contains one of the most powerful and moving passages from the Five Books of Moses: the Binding of Issac, which recounts Abraham’s acceptance of God’s command to sacrfice his son, Issac.

During college in the 1970s, I wrote an English paper about the Akedah story. I was very proud of my literary analysis, but somehow I lost the paper in the ensuing years. I’ve always thought about reconstructing it and the confluence of having this blog as an outlet and the coming of the New Year conspired to make it happen.

Torah commentators have always been exceedingly uncomfortable about this portion since at first glance it portrays a horrific demand placed upon Abraham merely to test his devotion. The burdens placed on Abraham, who is expected to slaughter his only son on God’s apparent whim, are intolerable. How can a God who is supposed to be good and merciful make such a beastly test? And how can Abraham apparently go along with the test in silent assent? Where is his protest? How can a father even think of committing such a cruel act?

The answers to many of these questions lie in a close analysis of the text itself.  The first thing to note is the repetition of key phrases which emphasize the quickening drama of the unfolding plot: 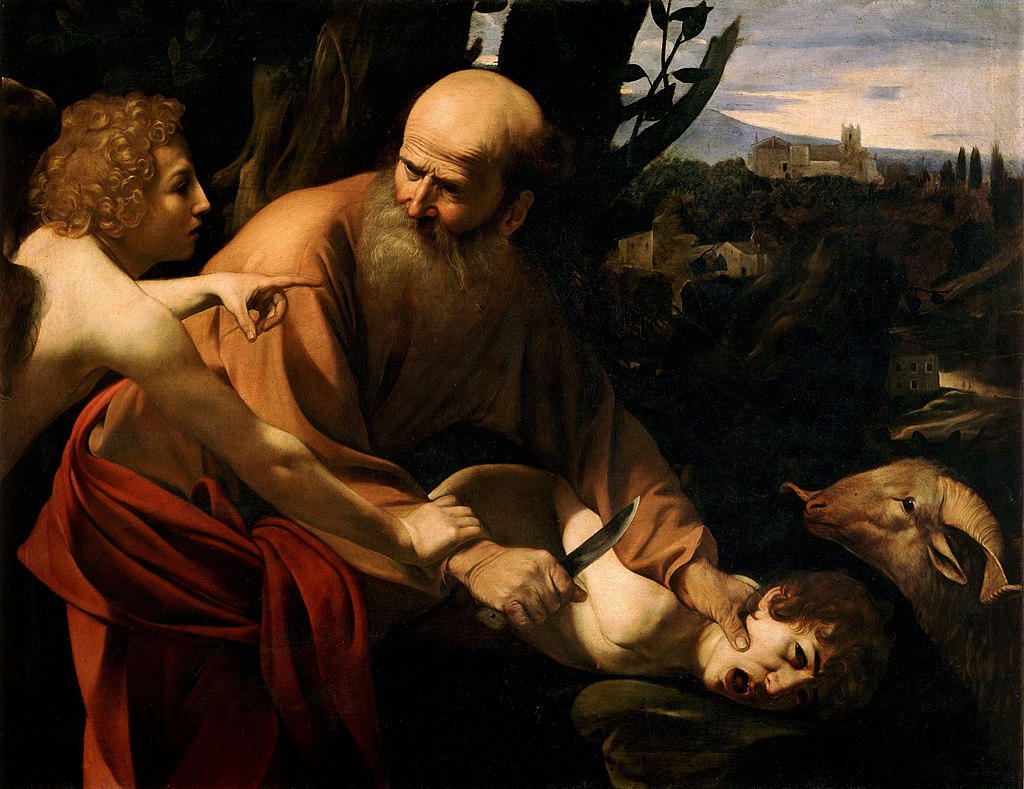 “Here I am” is a beautiful, simple phrase in which Abraham expresses his vital ‘hereness’ and willingness to answer the call of the one who addresses him (God and Issac). “The two of them walked on together” is another touching phrase which serves to emphasize the drama of Abraham and Issac continuing forward toward their rendevouz with fate, despite the conflict which must be racing within each of them. While Abraham and Isaac are together physically, their minds must be careening in a thousand different directions at once. Certainly they are not “together” emotionally or mentally. How could they be?  A father thinking he must kill his son; and an innocent child wondering why his father is behaving so strangely and ominously. “Issac, his son” as with the earlier phrases, emphasizes the preciousness of Issac for his father and reinforces the enormity of what God is demanding of him.

God invokes Issac in a four-fold way: “…your son, your only one, whom you love, Issac…” Each iteration intensifies the emotional sweep of God’s command as if to ratchet up the tension and horror in contemplating what Abraham will lose if he goes through with it.

It’s important to note the absolute simplicity of language here and the spare clarity of the descriptions of the action and the landscape. This sparseness is a perfect foil for the utter complexity and power of the questions contemplated. Some of the greatest world literature tells its stories in the simplest manner.  The Akedah is the quintessential model for this.

In the Akedah, what is unspoken is as important or more so than what is spoken. At key points in the action–when God first demands that Abraham sacrifice Issac–there is no recorded reaction or comment from Abraham. When Issac poignantly asks his father were the sheep is for the offering and his father responds vaguely: “God will see to it, my son,” one desperately wants to know what Issac was thinking. But the author does not want us know. He wants to withhold critical thoughts and emotions in order to increase the suspense and discomfort we feel. The deepest emotion in the Akedah story is within the ellipses of the characters’ actions.

What makes this story a great literary text is that it portrays a deeply troubling story and, while it resolves the tension in a way that restores Abraham’s glory, it does not gloss over the difficult issues it depicts. Our questions remain, unresolved and to a certain extent unsatisfied. And that is as the author wishes. He wants the reader never to cease pondering our relationship with God and the inhuman tests of faith to which He periodically puts us. Our faith as Jews is never supposed to come easy. It is meant to be a continual struggle.

I’m reminded of Franz Rosenzweig’s famous rejoinder to the question: “Do you lay tefillin [wear phylacteries]?” In his reply: “Not yet,” he emphasizes that the role of the Jew is always to strive for certainty and clarity of faith (in this case assuming the mitzvah of laying tefillin), but never quite to achieve it.

Another feature of the Rosh Hashanah reading of the Akedah is the nusach, or melody used to chant it. Each of the major Jewish holidays uses a different nusach for the Torah reading for that particular day. And each nusach embodies the spirit and tone of the day and the reading. For Rosh Hashanah, I’ve always thought the Torah trope [melody] was especially regal and grave. It captures the profundity of both the Akedah story itself and the High Holiday prayers, contemplating mortality and the great questions of evil, sin and redemption. For me, whenever I sang the Torah portion in the synagogue I felt possessed by the tremendous drama of the story and the day unfolding before me.

After these events, God tested Abraham and said to him: “Abraham.” He said: “Here I am.” He said: “Take your son, your only one whom you love, Issac and go to the land of Moriah. There raise him up as a sacrifice upon one of the mountains which I will tell you. Abraham rose early in the morning, saddled his ass and took his two child servants with him and Issac, his son. He split the wood for the offering and rose to go to the place which God would tell him.

On the third day, Abraham raised his eyes and saw the place from afar. Abraham said to his child servants: “Stay here with the ass and I and the boy shall go that way. There we will pray [bow down] and then return to you.” Abraham took the wood for the offering and placed it upon Issac, his son, while he took the fire [light, flame or firestone] and the knife and the two of them walked together. Issac said to Abraham, his father–he said, “My father.” He said: “Here I am, my son.” He said: “Here is the fire and the wood but where is the sheep for offering?” Abraham said: “God will see to the sheep, my son.” And the two of them walked together.

They came to the place which God told him. Abraham built there an altar and arranged the wood and bound Issac his son and placed him at the altar upon the wood. Abraham sent forth his hand and took the knife to butcher his son. The angel of the Lord called to him from heaven saying: “Abraham, Abraham!” He said: “Here I am.” He said: “Do not send forth your hand to the boy and don’t do a thing to him because now I know that you fear God since you have not withheld your son, your only one from Me.” Abraham raised his eyes and saw, behold another ram trapped by the horns in the thicket. Abraham went and took the ram and offered him up instead of his son. Abraham called the name of the place, God Will See, of which it is said today, On the Lord’s Mountain It Will Be Seen [a vision].

The angel of the Lord called out to Abraham a second time from the heavens. He said: “On myself I swear according to the Lord’s word that because you did this thing and did not withhold your son, your only one; I will bless you and multiply your seed as the stars in the heavens and like sand on the shore of the sea and your seed will inherit the gates of your enemies. All the nations of the earth will be blessed by your descendants as a result of your hearing my voice. Abraham returned to the child servants and they arose and went together to Be’er Sheva and Abraham remained in Be’er Sheva.
(translation, Richard Silverstein)

interesting
i’m actually writing a paper on what the akedah reveals about Abraham, Isaac and God and my theme was also the inactions and the lack of emotions and how that reveal more about the characters.
nicely written btw

I have always felt that the binding of Isaac was a story about a rite of passage for Isaac. You mention that in the sparseness and simplicity of the story we are left to wonder what went through the minds of Abraham and Isaac as they walked to Mt. Moriah. I believe that Isaac knew what was going to happen, and he knew that things would change between him and his father. After that event, Isaac became a man in his own right, led a productive life, and was able to bridge the rift between his two families. Unfortunately, we focus on very little about Isaac because we are stopped in our tracks by the Akedah story. He was a man of place, cultivated the desert, founded the town of Rehovot (not present day). Unlike his father and his sons, whose life work included moving about, he stayed put. He was a loyal son to his mother. He respected his wife and her wisdom in choosing Jacob for the final blessing. (It’s hard to believe that he actually believed the ruse perpetrated on him as he lay dying.)