Blaine Peace Arch at U.S.-Canada border, where Iranians were detained

We aren’t quite at the stage of internment…yet.  But we’re headed there.  I mean for you to think of the Japanese internment of 120,000 U.S. citizens and legal residents in remote internment camps in the far West.  It was the worst anti-constitutional blemish on the U.S. in the 20th century.  We must never go back, no matter what ‘national emergency’ our leaders may proclaim. 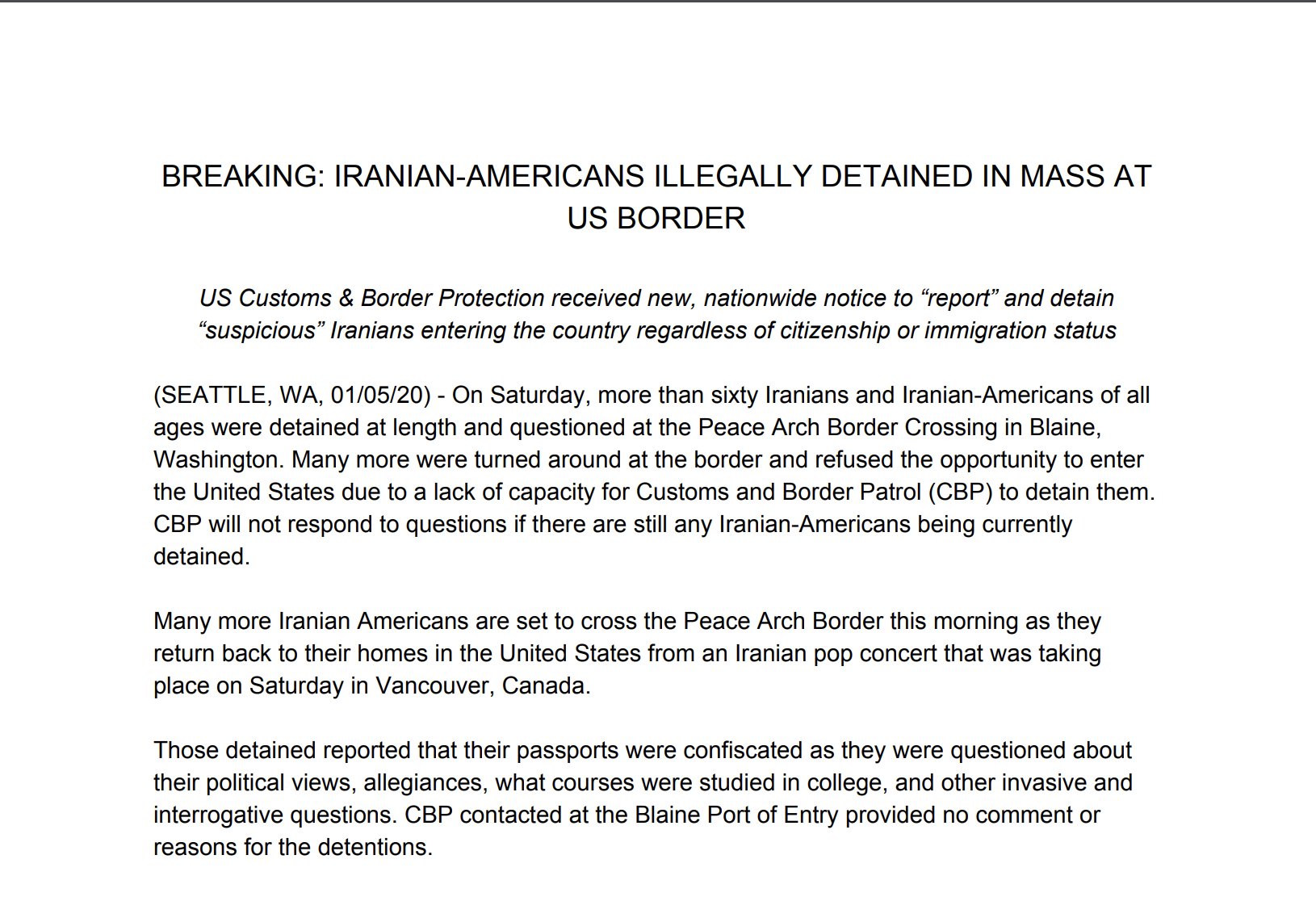 The pretext for the WWII internment was the unfounded fear that Japanese-Americans would constitute a Fifth Column and spy on the U.S. on behalf of their native homeland.  The same fear is motivating these detentions.  Trump is anticipating that Iran will activate its sleeper spies who have been placed here for just such an occasion.  It assumes that all Iranian-Americans are potential agents of the Iranian regime.  This is a deeply poisonous assumption that must be combated with all our will.

Lest you say the term “internment” is overly dramatic, think what will happen should there be a terror attack inside the U.S. or abroad targeting Americans and attributed to Iran.  The lobbying for internment will begin almost immediately starting with Lindsey Graham and Stephen Miller.  And lest you say it’s not possible, that there are too many constitutional safeguards, or “he wouldn’t dare go that far,” think again.  He would and he will.

If you ever considered what an American Hitler might look like, this is it.  He will go as far as the American people will let him, maybe farther.  Just like Adolf Hitler with the German people.  No, perhaps there will be no genocide.  But consider that Hitler only implemented the Final Solution in 1943, ten years after coming to power.  We have no idea what’s in store should Trump win another term. 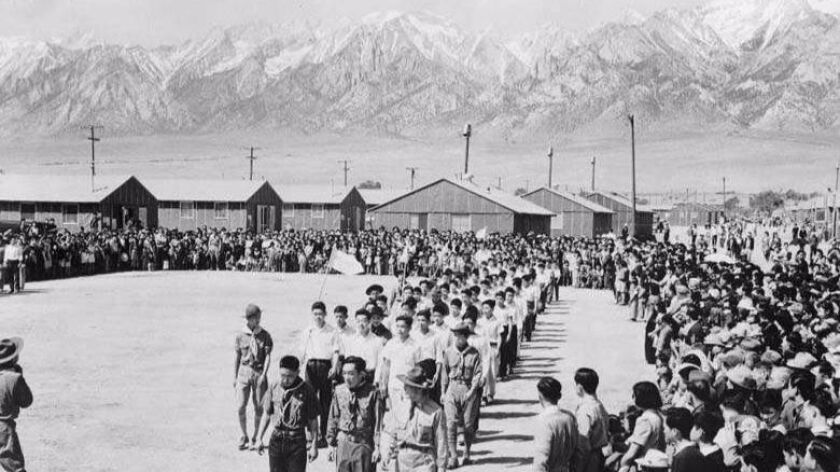 Manzanar, the infamous Japanese internment camp in the Sierra Nevada

Almost one-hundred of legal Iranian-American residents have been detained or turned back from U.S. entry over the past 24 hours at border crossings by Customs Enforcement officials.  Most of the detainees have been U.S. citizens, born in the U.S. as well:

The Washington state chapter of the Council on American-Islamic Relations (CAIR-WA) is assisting more than 60 Iranians and Iranian-Americans of all ages who were detained at length and questioned at the Peace Arch Border Crossing in Blaine, Wash.

Those detained reported that their passports were confiscated and they were questioned about their political views and allegiances.

…Crystal, a 24-year-old American citizen and medical student was…detained and interrogated for more than 10 hours with her family at the Peace Arch Border Crossing before being released early this morning. “The vast majority of people being held last night were American citizens,” said Crystal. “We kept asking why we were being detained and asked questions that had nothing to do with our reason for traveling and was told ‘I’m sorry this is just the wrong time for you guys.’”

CBP quickly released a dueling press statement claiming the detentions lasted no longer than four hours.  I’ll let you decide who to believe:

“Processing times are the result of the current circumstances, including staffing levels, volume of traffic, and threat posture,” CBP added. At Blaine, “wait times increased to an average of two hours on Saturday evening, although some travelers experienced wait times of up to four hours due to increased volume and reduced staff during the holiday season.”

There was a major Iranian pop music concert in Vancouver B.C. and the travelers were returning to their U.S. homes.  This punishment, besides being draconian and possibly a violation of the Constitution, punishes Iranian-Americans for enjoyment of their culture and traditions.  I can’t think of too many things more violative of American values than that.

This atrocious policy was almost certainly devised by Trump’s immigration Torquemada, Stephen Miller.  A darkly ironic historical footnote: Torquemada was born a Jew and converted to Catholicism, which provided the added zeal he used in torturing his former brethren. For that reason alone, it’s critical as American Jews to stand with our Iranian-American brothers and sisters.  Those of you who are not Jewish will interpret your own personal religious/moral obligations in this matter.  I respect those as well, of course.

Deeply disturbed by reports that Iranian Americans, including U.S. citizens, are being detained at the Canadian border with WA State.

My office has been working on this all morning. Please contact us with information on directly affected people at WA07PJ_casework@mail.house.gov.

I urge our Congressional representatives including my own, Rep. Pramila Jayapal, to hold hearings and haul Miller’s ass before a Congressional committee to explain this absolute schandeh.

You must carefully read and respect the comment rules.  Your first comment is moderated and approved by author. Comments violating the rules will be deleted.
Subscribe
4 Comments
Oldest
Newest Most Voted
Inline Feedbacks
View all comments
DrS

One aspect of the Iranian reaction has been under-represented in the reporting on the current crisis.

Many of the Iranian “threats” at this point speak to “expelling” the Americans (and Israelis) from the Middle East.
Does the Middle East “belong” to Iran?
They speak exactly like a colonial power, which they are. Their massive military interference in multiple countries in the area is well known and I don’t need to go into it.

Imagine for a moment, if Israel had “Jewish” militias which permanently held enclaves in various countries, which enforced its political agenda on the remaining local population. And Israel’s army generals roamed the area, directing these Jewish militias. And these militias openly declared their goal of expelling the Muslim influence from the region.

This is exactly what Iran is doing, in Lebanon, Syria, Iraq and Yemen. Just change the names.
Yet they are given a pass by the left and nobody calls them out for their own hypocrisy and criticism of US or Israeli projection of power.

(Don’t tell me about Israel’s occupation of south Lebanon, whose primary goal was to protect the Israeli homeland from terrorist attacks. Same with Israel’s cooperation with Syrian rebel militias)

Many of the Iranian “threats” at this point speak to “expelling” the Americans (and Israelis) from the Middle East.

Actually, unlike the U.S. which is thousands of miles away from the Middle East, Iran is IN the Middle East. So yes, it has a great deal more riding on whether the U.S. is present or expelled from the region. And given the millions of Muslims and Arabs who’ve died at our hands, I’d say there’s good reason to want the U.S. gone. Not to mention that Iran is not the only country in the region whose citizens want us to get the hell out: Lebanon, Turkey, Syria, Iraq, Afghanistan; they all want the same thing. Curious thing about fucking up the lives of millions: nobody wants you around.

Imagine for a moment, if Israel had “Jewish” militias which permanently held enclaves in various countries, which enforced its political agenda on the remaining local population. And Israel’s army generals roamed the area, directing these Jewish militias. And these militias openly declared their goal of expelling the Muslim influence from the region.

That’s hilarious because that’s precisely what Israel did in creating, funding and supplying the South Lebanese (Christian) Army. It’s just what Israel did with al Nura in Lebanon and what it did in helping create Hezbollah and Hamas. You don’t seem to be getting it, do you? Israel is as much or worse imperial power in the region as Iran is.

This is exactly what Iran is doing, in Lebanon, Syria, Iraq and Yemen.

Not at all. IN each of these countries Iran is not imposing itself on them. Rather, it has allies in these countries whom it is aiding in their own efforts to obtain freedom or political power. Not to mention that most of these countries border Iran, giving the latter a vested interest in having friendly allies surrounding it. The U.S. has been far more violent over a far longer time in overthrowing and installing puppet governments in our hemisphere who will do our bidding. Iran is a piker by comparison.

(Don’t tell me about Israel’s occupation of south Lebanon, whose primary goal was to protect the Israeli homeland f

Horseshit. Hundreds of Israeli boys were killed in southern Lebanon. And it did nothing to “protect the homeland,” which in the coming years will be under an even greater threat from Hezbollah thanks to Trump’s insanity.

Richard, you must be joking.

It is normal, and expected, that America would heighten it’s scrutiny of Iranian-Americans at this time.

Also, being an American citizen doesn’t free you from suspicion, and being an Iranian doesn’t make you an immediate suspect. Consider the American servicewoman who turned spy for Iran, or the naturalized American, Alexei Saab, now indicted in New Jersey for spying for Hezbollah.

The ‘detention’ of these tourists was only for a few hours, and likely the result of U.S. Customs being overwhelmed by a large group of Iranian-Americans returning from the music concert in Vancouver.

Mountain out of a molehill.

BTW, I see that some anti-Zionist websites, like Mondoweiss, are already blaming Israel for Soleimani’s assassination.
Are you going to follow suit too?

@ Ben: No, the jokes on you. It is impermissible for border agents to interrogate U.S. citizens for whom there is no legitimate suspicion of committing a crime or endangering security. They may not ask them prying questions. Unlike where you live, we have a constitution and laws. We don’t permit tyrants to ransack them on a whim.

being an American citizen doesn’t free you from suspicion

being an Iranian doesn’t make you an immediate suspect.

As I wrote in the post which you seem not to have read, customs agents had specific orders to detain anyone of Iranian descent, which is precisely what they did.

The ‘detention’ of these tourists was only for a few hours

10 hours is not “a few hours.” And besides that’s not the point: there was NO REASON to detain them even for a few minutes, let alone hours.

Go fuck yourself. You’re a hair away from being banned. Keep it up. Nothing would give me greater pleasure.

BTW, your IP address resolves to Luxembourg, which means you’re likely using an IP proxy. Don’t do that. It only makes me suspicious of your motives and presence here and makes your time here even shorter than it otherwise would be.