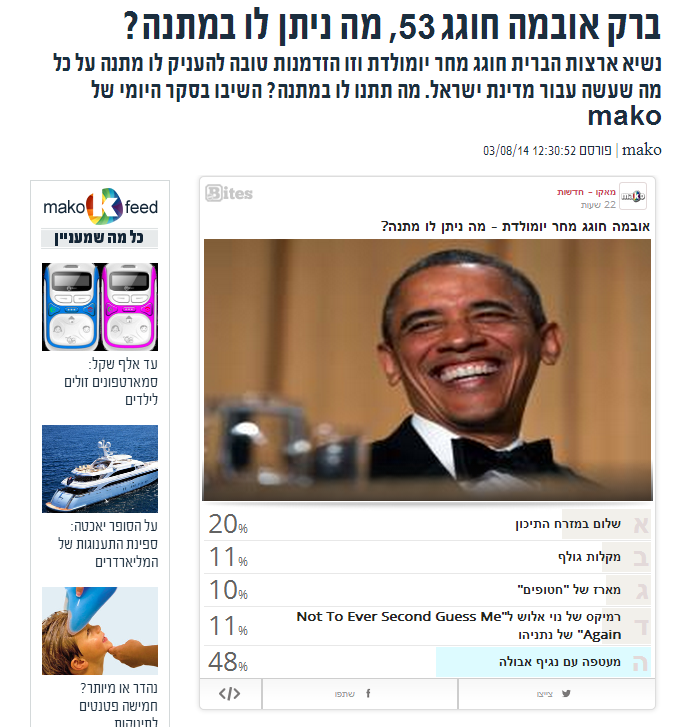 What to give Obama on his birthday? Ebola

Israel’s Channel 2 is the country’s most popular TV station.  Its website, Mako, published the results of a poll asking what listeners wanted to get Pres. Obama for his 53rd birthday tomorrow.  20% wanted to give him “peace in the Middle East.”  Nice.  10% wanted to give him the Noy Aloosh remix of “Don’t Second Guess Me Ever Again.” Cheeky, but funny.  11% said: golf clubs.  You know your man.  And the winner, with 48% was: “an envelope containing Ebola virus.” Say what?

I could understand if this was Hustler Magazine or even the Daily Mail, known for trash journalism.  But the country’s most popular TV channel?!  Even if we chalk this up to a bad case of media stupidity, and assume that those who responded to the poll wanted to be in on the joke, doesn’t this tell us quite a bit about the Israeli political environment?  The leader of Israel’s only real ally in the world is despised so much that Israelis would like to see him dead.

There’s an added subtle bit of racism in the fact that Islamophobes and the Israeli and American far right believe Obama is a Muslim born of a Kenyan father.  Wishing him a fatal illness that originated in Africa and  is ravaging parts of the continent right now seems a conscious or unconscious racist allusion to his origins.

Richard why on earth should this surprise you. The country has turned viscerally and rabidly racist to the hilt. Everything that is said and done ALWAYS contain a shred of racism. Look at the legislation passed and waiting to be passed.
The Netanyahu propaganda machine has been churning speaker after speaker after speaker for the destruction of everything in his path. I ask you to look only once at the IBA english news (the only english news program generated in israel) it is absolutely nothing but a propaganda program dedicated to prove, support the leadership, every palestinian or arab is a terrorist. the word terrorist is repeated at least over 500 times in each 30 minutes program. it is a brain washing propaganda machine of the worst kind, fox news is sesame street level compared to what goes as “news” and this is the ONLY news that non hebrew speakers are showered with day in day out
wake up richard, this country is racist and that’s a fact

I don’t think that the Daily Mail ever actually descended anything like as low as this.

The Obama administration could take the moral high ground here:
There are at least four different Ebola vaccines being developed in the United States, all stalled at the stage of needing funding and clearance for human trials. The administration could break the logjam for two of them to go to full trials. To the best of my knowledge there’s no vaccine being developed in the UK, probably because of fear of animal rights terrorism.

The other thing is that Ebola isn’t that easily caught from an envelope, but it is easily caught from infected bushmeat, which could be subject to more vigorous controls than it is in the West. There are laws against trafficking meat from wild animals, especially primates, but there’s no huge political or budgetary priority attached to enforcing those laws.

The Ebola virus could easily kill more people than the recent operation in Gaza, and they could be of any race at all. There needs to be a vaccine, because there probably won’t ever be a specific treatment.

“The leader of Israel’s only real ally in the world is despised so much that Israelis would like to see him dead.”

There were a total of about 2,000 respondents to that obviously non-scientific internet poll.